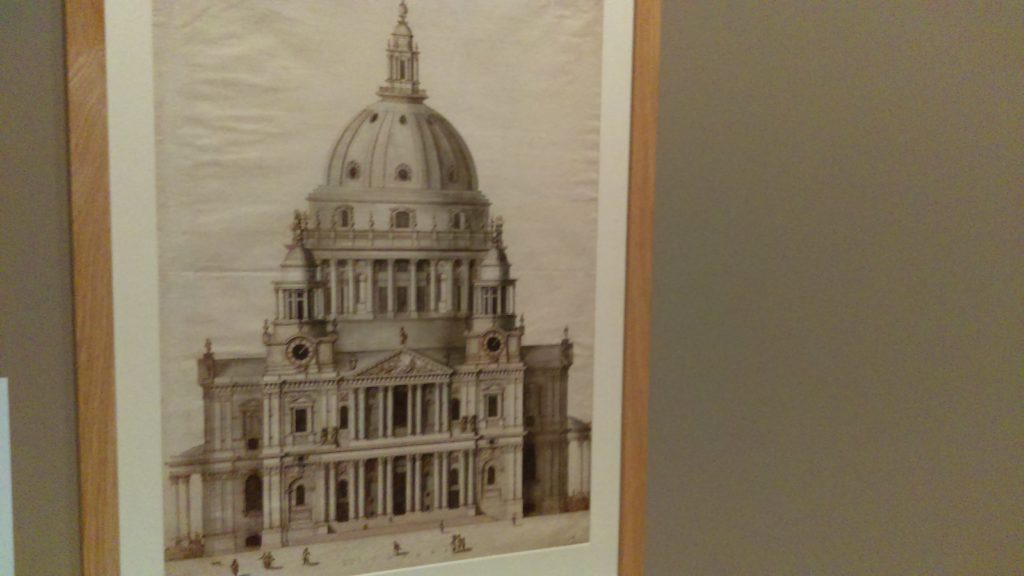 When it comes to the taxonomic classification and categorisation of art and artists from the Modernist age, while I may not be quite up to the neurotic specialist subject levels of the typical atypical Mastermind contestant, I still like to think I’ve got a pretty good understanding of who’s who and what’s what. So, I know my Pop from my Op and feel confident enough to differentiate between a work of early Analytical Cubism and it’s later so-called Synthetic Cubistic cousin. Although, if asked to define the characteristics that separated an Orphist from a Vorticist, I think I’d probably have to pass. And, similarly, while I know the approximate dates during which the Post-Impressionists and Post-Modernists delivered their postal works, and am cognisant of the temporal and geographical distances that divides a Russian Cubo-Futurist from an American Abstract Expressionist, I’ve always thought that the vita was just a bit too brevis to get around to trying to memorise the subdivisional technicalities that splintered members of that latter grouping into adherents of Hard-Edged, Colour Field, Post-Painterly and all their other multitude of various factional tendencies. 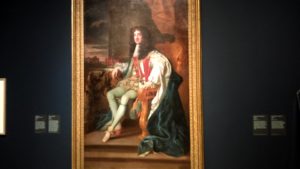 As for the art of the Classical era, here I have to admit that I’m on stickier ground and definitely at a disadvantage to those proper, fully trained art historian types who dutifully attended their Courtauld classes and wrote up theses after completing grand tours round the piazzas and palazzos of Italy, since my own humble attempts at self-improvement and auto-didactic enlightenment began and ended after I finished reading EH Gombrich‘s The Story of Art. It’s a book that I’d recommend to anyone as a jolly good read – the clarity of the prose reinforcing the sense of authorial conviction and wisdom that comes from writers, like himself, Pevsner or Clark, who have the absolute confidence in the correctness of their opinions and assertions. Having said that, it’s a long time since I last consulted this wonderful tome and my memories of the content of the twenty or so chapters that so eruditely and precisely delineate the evolution of the artistic story, all the way from Fred Flinstone‘s first cave art graffito through to the early first impressions of the later future Impressionists, have faded into a wobbly blur of largely unreliable generalised recollections. While this may have provided me with the superficially sufficient background knowledge to be able to bluff my way through a dinner party conversation or even impress some gullible artworld initiate, I’m well aware of the lamentable limitations of my historical art historical knowledge and the fact that in this sphere I have a more than enough lacunae to fill the Albert Hall.. 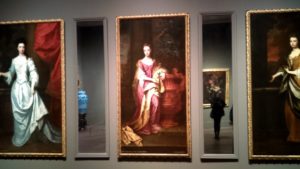 All of which is by way of an apologetic introduction to today’s blogging visit to Tate Britain where the latest new exhibition to open is entitled British Baroque, a term that requires me to pause and dredge my way back through those dusty, seldom-visited cerebral caverns used as archival storage space, in order to try to slowly piece together odd scraps of information that might be relevant to this particular art historical topic. The point being that my written discursions are meant to convey the idea that I sort of know what I’m talking about. And that while my prose might not be quite so elegantly phrased as that of Sir Ernst or Sir Nikolaus or Lord Kenneth, and my own unbenighted and ignoble explications nowhere near as wise, perspicacious or insightful as theirs, nevertheless, I do share the same enthusiasm for encouraging an audience to go and take a look in the right direction. And perhaps the most important characteristic required when attempting to perform this role of cultural tour guide is the ability to successfully convince any would-be followers that the person leading the way knows where they’re going, having been there before or, at least, having roughly reconnoitred the route ahead. 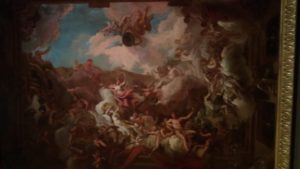 Anyway, on this particular occasion, after only a relatively limited amount of head scratching and brow furrowing, I manage to recall that the great Gombrich began the chapter of his deliberations on the Baroque period by reproducing a picture of St Paul’s Cathedral which, as all good schoolchildren will know, followed on from the Great Fire of London, an event that occurred in a year easily recalled as being 1666. Not only that, but the dreadful conflagration was recorded in Pepys‘ diary, which also famously details the return of the bewigged Charles II (who looked a bit like Captain Hook) to the monarchy after the demise of Cromwell, the rounded-headed grinch who had previously beheaded his father, Charles I (who looked a bit like Alec Guinness). 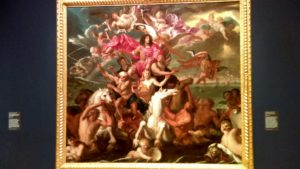 Now, that little potted history lesson may have all the depth and profundity of a flick through the pages of 1066 And All That but at least I feel fairly sure that I’ve reached the right time zone and, in fact, I reckon it actually starts to set the scene quite well. And so, by a process of intuitive induction, I’m reasonably confident in my assertion that the art of the Baroque is going to reflect the tonsorial tastes of those in charge, with the short hair, hair-shirt age of previous puritanical miserabilism being replaced by the elaborate curly-wurly excesses and flamboyant in-yer-face, over-the-top hedonistic rumbunctiousness of visual blingtastic extravagance. Which, while perhaps not the exact phraseology that Gombrich himself would have employed, nevertheless hopefully conveys not entirely inaccurately the sprit of the time. And, indeed, I’m very pleased to be able to report that the exhibition expectations based on my very vague semi-baked rambling thought processes are confirmed by the first big picture that faces the viewer on entering the show. For here we have good King Charles II resplendent with his long dark tresses and enrobed in a fine flowing silky robe, heralded above by a cast of floating putti and angels while balanced below as the pinnacle on a tower of bare-bosomed beauties and roaring white stallions kept in check by their heroically muscular attendants. 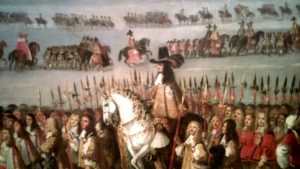 Now, I know this kind of art is easily dismissed as being all a lot of fluffy frothy absurdities but I find it hard not to enjoy looking at this type of spectacular nonsensicality. There’s just so much of it to gawp and gape at and the sheer excessive silliness is a huge part of its attraction. But before heading headlong into a wallow among all the rest of the displays of zeitgeisty immoderation – and there are another nine full rooms to wade through – it’s worth pausing at one of the smaller paintings in this first introductory room. Dirk Stoop‘s Cavalcade Through the City of London (detail shown above), is a picture constructed to record the great parade that took place on the eve of Kings’ coronation and shows the monarch on his grand white horse surrounded by courtiers with pikestaffs leading a great trail of other supporters winding their convoluted way through various specially constructed triumphal arches. The interesting point about this work is that it represents a much less visually sophisticated pre-Baroque style where events – in this case the great procession – are simplified and stylised and represented symbolically rather than detailed with the more precise, literal accuracy that is the hallmark of all the other works that follow. It provides an interesting paradox since accuracy is usually equated with truthfulness whereas, on this occasion, it’s hard not to see the more basic representation as being somehow more honest, and that all the flashy finery that follows is suspiciously suspect and shallow. 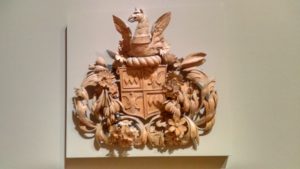 As the exhibition stresses, one of the key components of the Baroque style was the enjoyment that all the key artists had in showing off their technical skills, specifically those who had mastered the mathematical processes required for the precise rendering of perspectival arrangement. It’s a facility that’s evident in the portraits and still lifes but used to greatest effect in the designs for the ceiling paintings that took the art of interior decoration to its greatest heights (lierally and metaphorically) with the ornamentation of public buildings and private mansions. As the small collection of preparatory sketches here shows, the more complicated the cascading congregation of gods and goddesses reclining on their clouds while surrounded by flying horses and floating nymphs, the better everyone liked it. Other examples of this new found delight in focussing on technical virtuosity come with the intricately carved wooden constructions most famously executed by Grinling Gibbons, as well as the fashion for producing so-called trompe l’oeil works where the artist sets out to deliberately deceive the viewer into thinking the violin hung on a door knob or the noteboard holding its letters and pamphlets are real rather than exquisitely detailed paintings. 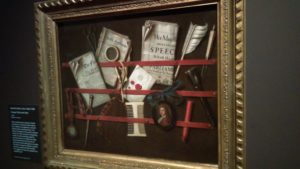 What perhaps best illustrates the spirit of the times, however, are the grand examples of portraiture and especially those from the two great masters of the period Peter Lely and Godfrey Kneller. And those who like looking at pulchritudinous parades of fresh-faced beauties decked out in their prettiest and most expensive costumes will not be disappointed by the selection here which, for all its wonderfully facile celebration of celebrity, rivals the recent red carpet parades of Oscar night hopefuls. 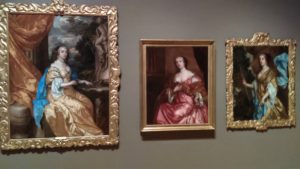 Of course, just as the fantasy lifestyles of Hollywood’s denizens are utterly unrepresentative of actual lives lived by the majority of the present day populace, so the stories told in this exhibition are limited to those relating to a tiny minority of courtly favourites and aristocratic elites, and I daresay that the biographies of my own humble ancestors of the period would have been characterised not by frippery and finery but by squalor and poverty. Hopefully they will forgive me for looking at this show and enjoying it quite so much, but if excuse were needed for such an indulgence, I suppose I could quite reasonably say that I was just carrying out some art historical researches and that now, having upgraded my knowledge of the Baroque period in British art, I can get back to concentrating on matters of more serious deliberation. 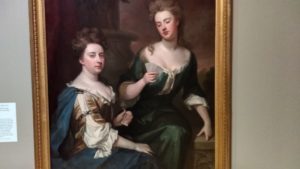