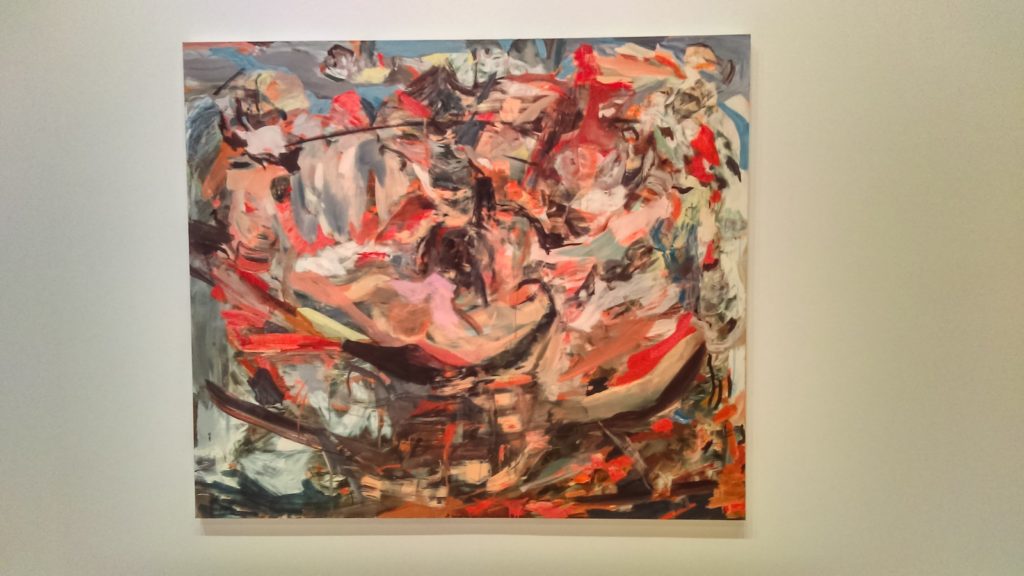 Whither painting?  It’s a question that’s been cropping up and bearing down on the kind of sad serious souls who have sufficient schedule space to consider such existential cultural conundrums, for a very long time. Certainly, at the start of the Modernist era it came to the fore when the first technological revolution gave rise to the development of photographic reproduction in the middle of the 19th century. Suddenly, for the first time in the history of humankind, it was no longer necessary for the rich and famous to have to rely on the commissioning of artists like Gainsborough to paint a portrait of the family and its estate; or for the rich and curious to have to wait for Turner‘s return from crossing the Alps and sailing round Venice to see what those distant exotic locations actually looked like. But, fortunately, not all the artists of the day sought to swap their brushes and palette for a Box Brownie and a roll of film. And if painting had lost its formerly pre-eminent position as the medium of representational record, it quickly bounced back into relevance by turning the potentially negative situation into an opportunity to evolve in other directions.  The immediate consequence being that the more far-sighted artists either loosened their brushwork and started creating impressive impressions in an Impressionistic style or roughed up their technique and began experimenting with explosive expressions in an Expressionistic one. And so it was that for the next generation or two, visual artists decreed that their purpose was to come up with more and more novel ways to present newer and newer views of the fast changing world as it was seen during the last quarter of the 19th century and the first bits of the 20th. 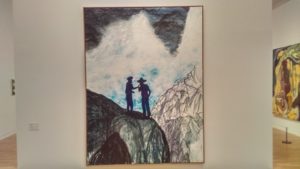 By the time the Second World War arrived, however, this period of intense innovation had just about run its course with even a genius like Picasso starting to look as if he was having difficulty coming up with any new ideas. But then, just as representational painting was beginning to look a bit past its best before date, along came the great inflationary boom of American Abstract Expressionism to revivify the form, followed soon after by the Pop Art explosion that managed to give figurative and narrative commentaries a new lease of life. It was a bold revivalist bid but, alas, one that proved to be somewhat short lived and something of a blip so that as the 20th century started to draw towards its inevitable conclusion, artistic fashions began to change course and take a decidedly Duchampian turn away from the generally enjoyable exploration of retinal delights to the more specific appreciation of the cerebral entertainments associated with so-called Conceptual Art. 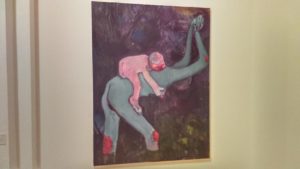 And while the actual inspirational ideas encompassed by works classed as Conceptual often seem to be lacking much in the way of any great conceptual exceptionality, nevertheless, pound for pound, I think these days that the majority of contemporary artworks being produced – certainly amongst the student generation – no longer take the form of painted pictures but are grouped under the more sculptural formats of bricolage, assemblage, collage, installations and performances or else are related to the more technically time-based media encompassing such practices as film and video and other forms of photographic manipulation. But that’s not to say that painting has completely faded away – far from it. Exhibitions like the annual Royal Academy Summer Show offers up room after room of galleries whose walls are a mosaic of painted canvases. Indeed, some of them are really rather diverting and pretty and, in a way, there really is usually something for everyone’s tastes since the works range across just about the whole gamut of styles that Modernist art threw up during the course of the past hundred-and-fifty years. 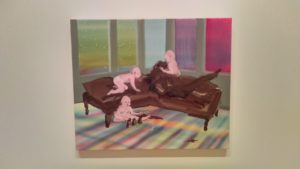 So, if you like Impressionism, Expressionism, Pop, Abstraction then there will be competent examples of all these and many other gradations in between. There may even be examples of the last of the Modernist styles, the so-called Post-Modernist pastiches that knowingly pinched ideas from the past then shredded them apart or blended them together to form something new…or, at least, newish. And that, in a way, summarises the painter’s problem in that it’s just proved to be so very difficult to come up with a truly novel, specifically contemporary style to capture the spirit of the times in the way that the blur of Impressionism reflected the speeded up world that had been kick started by the Industrial Revolution; or the manner in which the flashy facile designs of Pop resonated with the kitschy consumerist boom of the 1960s. 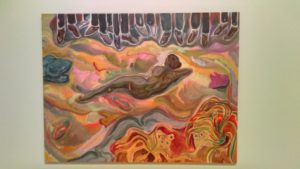 Now, in our no longer quite so new 21st century, when just about everyone is condemned to taking a selfie self-portrait every hour of the day and night; where no corner of the globe has been left unexplored by some instagram influencer or robotic google mapping drone; and when every image ever produced can be instantly copied, edited, reviewed, revised and deleted all at the click of a mouse…the call goes up again. Whither painting? Is there really a role any longer for a person to turn away from the comforting clinical sterility of the laptop or mobile screen, forgo the easy electronical manipulation of bunches of pixels and instead risk getting hands grubby by using the bristly hairs attached to the end of a simple stick to smear a spread of pretty coloured clays against the weave of a rough rectangle of canvas sheeting? 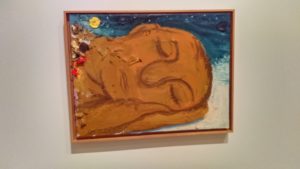 Radical Figures is the Whitechapel Gallery‘s attempt to answer to the question and it really would be wonderful to be able to report that the curatorial team, having returned from an expedition to the farthest reaches of the avant-garde’s outlying perimeters had discovered the future and found it to work, or that they’d turned inwards and taken a radical revisionist look at some previously overlooked and underrated artists who had been hiding in plain sight and who, unbeknownst to the rest of us, had successfully found a way of rendering the zeitgeist for the rest of us to see. Frankly, pushing apart the doors and entering the Gallery I confess I wasn’t expecting to come across any such exciting radicality and so wasn’t really too surprised when I didn’t find it. Which is not to say that the exhibition is a complete waste of time and space but rather that it does nothing to confound the widespread belief that the art of painting has very likely just about reached a state of terminal decline and is in the intensive care unit and fading fast and that it can’t be long before the last beeps stop beeping and the pulsating squiggly ripple on the monitor stars to flatline, whereupon everyone will be able to return to gazing into their digital screen of choice. 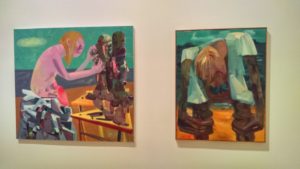 And so, without wishing to be too overtly pessimistic, I’m not sure I could really recommend anyone making a real effort to get to see the show or to pay out the £9.50 entry charge to get in to see it. Expectations are liable to be dashed if one hopes to come across anything that might truly reveal an insightful vision into the future or that might be considered to be outstandingly beautiful or moving, or even anything that might be so outrageously shocking and confrontational that it might cause one to have to reconsider one’s opinion of the state of the world or the prejudicial assumption of one’s currently preferred position. On the other hand, if you happen to be in the vicinity and can somehow blag a free entry or sneak past the check-in desk, then the fifty or sixty mainly large scale paintings, being the representative work of ten reasonably well-established contemporary painters, will probably provide a not entirely unpleasant half-hour’s engagement. I really don’t think that they’re going to knock anyone’s socks off but then maybe most gallery-goers these days prefer to retain their vestments and composure and would start to feel uncomfortable were things to be otherwise. 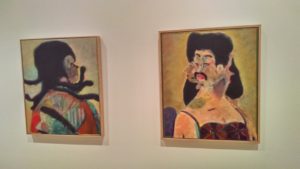 Which makes me wonder whether the current generational gap is wider than commonly imagined. And that unlike oldies like myself, who affectionately remember being shocked and excited by the transgressive rebellious nature of society in the 1960s and it’s mirroring in the art of the time, today’s youth seem to want, at all cost, to avoid being challenged. So that whereas some of us came to expect that art should push at the boundaries of what was acceptable and traditional and be generally anti-establishment by default, a younger set want to close their ears and eyes to anyone whose opinion they might disagree with and prefer trigger warnings to protect them from all alternative views to their own and their peers. Maybe that’s why I found the Whitechapel show so bland – but perhaps it’s that very blandness that will appeal to today’s younger viewers. 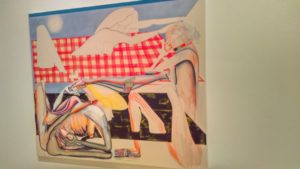 Hopefully, the photographs of the works that, as usual, I’ve interposed within the paragraph breaks, will provide a reasonably representational record of the exhibition and will encourage or deter a visit depending on one’s aesthetic disposition. The works are, in order of appearance, those of: Cecily Brown, Daniel Richter, Sanya Kanarovsky, Tala Madani, Michael Armitage, Nicole Eisenman, Dana Schutz, Ryan Mosley, Christian Quaries and Tschabalala Self. With the artists being 60:40 women:men; ages ranging between thirty and sixty; and with three each from the UK and the US; two from Continental Europe; plus one Russian and one Iranian, the selection seems to suggest that, at least amongst the art establishment that picks these kinds of shows, there is now an almost consensual universal globalised painterly style which I propose might very reasonably be grouped together under a term freshly coined by myself as Meh-ism. 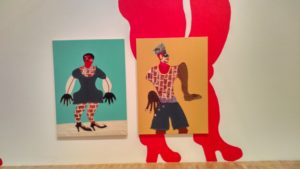 One response to “Squiggly Ripple”