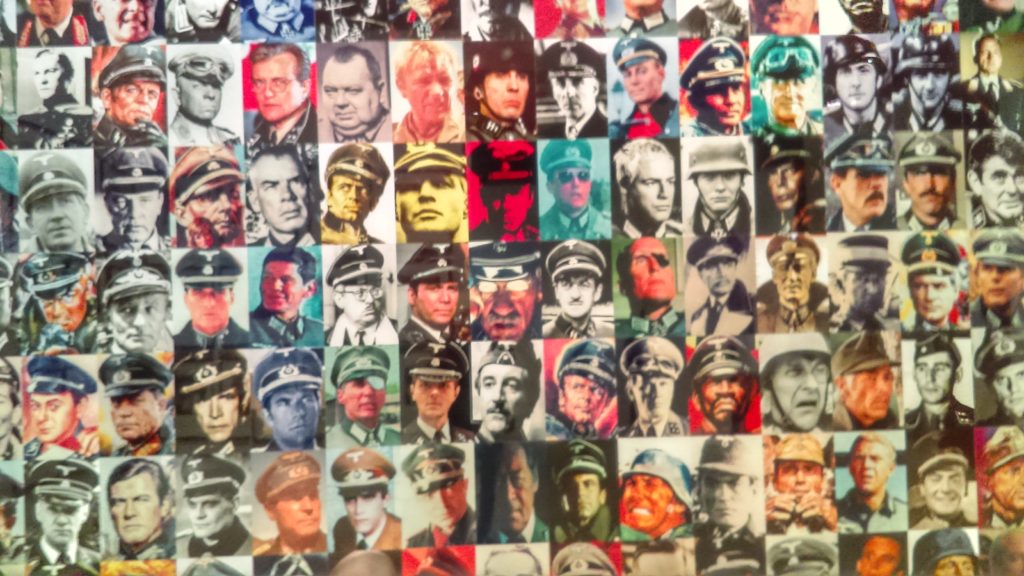 What does it mean to be a male in today’s world?

Well, um, er, of course, er, crikey…ahem, hang on a minute, it er, well um er… On consideration, I suppose the different responses to a question like that tend to separate the male population out along a spectrum of possibilities – and apologies if that sounds just a little bit chauvinistic but, in the circumstances, it’s hard enough speaking on behalf of all the men of the world without having to try to try to think about the opinions of the female demographic as well. So, anyway, I suggest that stood at the opposite ends of this putative spectrum of opinions are the personification of two caricature characters:  the Neanderthal and the New Man. The former inclined to grasp at his nuts and grunt something along the lines of, ‘…what a bloody daft thing to ask, it’s so obvious that it doesn’t need thinking about’, while at the alternative enlightened extreme the more sophisticated bien pensant is thinking, ‘…gosh that’s a jolly important and interesting conundrum, I wish someone would devote an exhibition to exploring the divers ways masculinity has been experienced, performed, coded and socially constructed in photography and film from the 1960s to the present day’. In which case it’s those in the latter grouping who are in luck today for the Barbican Art Gallery has just opened its latest exhibition entitled Masculinities: Liberation through Photography which, as the introductory wall panel usefully explains, specifically aims to, ‘…explore the divers ways masculinity has been etc etc etc.’

That being the case, I’m really not quite sure whether I’m meant to be the target audience for this exhibition or not. For, on the one hand, I can’t say that I’ve ever really been troubled, concerned or ever spent very much time thinking about matters of my, or any other people’s, definition of maleness while, on the other, I’m certainly awoke enough to know that over the past fifty years there’s been an ever-increasing body of professional critical theorising, general social philosophising and popular public discourse all very much centred around the fracturing and fluidity of the old-fashioned analogue binary definitions of maleness or manliness or manhood or whatever else you’d like to call it. Anyway, I suppose the point of an exhibition like this, in a Gallery like this, is to try to appeal to the widest possible audience, to go in for broad strokes, aim for a bit of general consciousness raising and then, for those of us who have no very great particular interest in the subject, try to draw attention to key points and perhaps make one review one’s position, rethink one’s attitudes and at least become a little more au fait with the trends of contemporary dialogues, current debates and present-day thinking.

In which case, I have to say that I think the exhibition is all a bit of a floppy flop. And will be decidedly disappointing to those moderately disinterested types like myself who perhaps expected to see a clearly presented history of society’s changing attitudes; or some surprising revelatory visual representation of new and previously unthought of ideological positioning; or perhaps example of particularly well-crafted or far-sighted artistical artefacts that illustrated and illuminated the latest keynote theoretical points. Unfortunately, there just doesn’t seem to be anything very new or exceptional here and I’m pretty sure that I exited the exhibition without having altered any of my original thinking on the matter of my maleness or, for that matter, anyone else’s. Which makes me wonder if I’m perhaps a lost cause – too ancient and perhaps closer to the Neanderthal brotherhood than I had otherwise realised and so unable to appreciate the subtleties of the socio-politco-artistical arguments being made by a younger generation of curators which are, sadly, destined to be forever beyond my comprehensional grasp. Either that or, maybe, the show is just a bit of a hackneyed rejigging of a set of tired and cliched old ideas and accompanying illustratory exemplars that quite a few decades ago might have been thought to be novel, outrageous and transgressive but that have now entered into the public domain and settled down to become become so uncontroversially mainstream and establishment as to be utterly unremarkable.

I kind of think that it’s the latter and have to admit that I was getting so bored of the show that, by the time I’d gone round the opening set of ground floor rooms and plodded on to start on a circuit of the display spaces in the upper floor section, I found my concentration was lapsing to such an extent that I just wanted to whizz round the second half of the show and head on out. Consequently, I have to admit that I didn’t really pay all that much attention to this latter section, and so apologies if this was where all the better stuff was, but by the time I got there I’d just about reached the end of my attention span.

Anyway, for the sake of the cogency of this bit of perhaps slightly half-baked blogorphic disquisitioning, I guess I’d better go back and start again at the beginning of the show and see how far I get before I run out of interest, tail off and peter out. And so, the opening image that confronts the viewer upon entering the exhibition is of a large dodecapartite grid of photographs of a middle-aged rather saggy, flabby-fleshed naked male body positioned in four rather cramped poses. Frankly, it’s not a very pretty picture, although I daresay that were the lighting to be adjusted and the model to be more comfortably posed it wouldn’t require an awful lot of makeup or photoshop trickery to make the image more presentable and appealing. But then I rather assume that this is the very point John Coplans, the photographer of the self-portrait, is trying to make – that we are universally used to seeing media being manipulated to typically portray men as being powerful, confident, self-assured, in control and so forth whereas in real life the actual reality may well be the opposite. Well, fair point and competently enough made but I kind of think that anyone who has ever taken a selfie – and by that I suppose I mean just about the entire population of the developed world over the age of eight or nine – has probably realised that if the intention is to project one’s personal image out onto any social media platform where it will be instantly judged, graded, liked and deleted, then it’s worth making a bit of a titivatory effort -a situation that I’m pretty sure applies equally to the self-image sensibilities of every male, female and individual in between.

This first part of the show has been grouped together under the heading Disrupting the Archetype and, following on from Coplans‘ naked ape, come various men in uniform – soldiers, cowboys, athletes. But, of course, the pictures here aren’t a succession of stills from John Wayne movies where the rugged hero dons the appropriate sartorial costume before biffing the baddies, winning the war and getting the girl. Again, rather unsurprisingly, what’s on offer are examples of more subtly drawn characters such as those Thomas Dworzak reveals when documenting Taliban fighters as they sit for their portraits since, as well as wanting to be pictured holding their favourite kalashnikovs, they also sometimes seem to like to carry acbunch of flowers, hug their buddies and dab a little kohl makeup around the eyes. Similarly, Collier Schorr‘s collage of cowboys are a mixture of pretty callow youths and grizzled old men rather than lean, mean Clint Eastwood lookalikes; Rineke Dijkstra‘s bullfighters are all a bit battered, bruised and bloodied; and Herb Ritts‘ car mechanics seem to prefer oiling their glistening pecs rather than lubricating their gaskets or whetever it is that people used to do when they opened up their bonnets. All the pictures are mildly diverting but I can’t help thinking that the general curatorial message could have been conveyed somewhat more succinctly by simply playing a video of the Village People performing one of their songs about visiting the YMCA or enlisting in the Navy. And I’m not sure that even that bit of performative dressing up was really considered all that very radical when it first came out some time back in the late 1970s.

Among the other slightly more interesting items in in this section there are some familiar funny shots of a young Arnold Schwarzenegger taken during his early body builder phase by the late great Robert Mapplethorpe; a dramatic sequence of photo-documentary shots from Peter Marlow embedded in a working class community up North; and Jeremy Deller‘s video-installation dedicated to investigating the curiously camp life of the wrestler Adrian Street.

After that, it’s on to a succession of other chapters starting with those about male power and fatherhood. So, there are dozens of straightforward portraits of men in suits and men in boardrooms; some rather more peculiar shots recording the initiation rights required to enter certain American student fraternities; and then series of snaps of dads with their mums and kids – sometimes ensconced in happy family situations and sometimes ensconced in decidedly unhappy family situations.

And, as already mentioned, somewhere around this point my interest started to flag. I do generally find that walking around exhibitions that consist solely of rows and rows of mainly black and white photographs plus occasional videos does tend to get a bit wearing. Partly it’s having to glance at so many identifying labels but mainly, I think, it’s the sheer volume of visual information that the viewer is expected to take in. In some ways I think perhaps a better way of examining this exhibition would be to buy the catalogue, which allows for time to more carefully look at the photoworks and also to read the texts which, in such a didactic show, is clearly a large part of the curatorial intent.

Having said all that, thete is an alternative Freudian explanation as to why I chose to make only a cursory examination of the works on the upper deck of the Barbican Gallery.  That my wish to maje a speedy exit was not because I was getting increasingly bored with the subject matter or suffering a more general mental fatigue, but rather that a challenge was being made to my own subconsciously held beliefs of what it means to me to be a male.  That it was the potential threat of having to review and revise these ideas that made me uncomfortable and disinclined to confront my inner demons. Well, I have to concede that I can see that it might just be true that there could be some deep complex psychological reasons as to why someone who considers himself to be a straight, white male like myself might find less interest among the subsequent sections entitled Queering, Reclaiming the Black Body, and Women on Men which, as their titles suggest, go on to reference gay culture; non-caucasian communities; and views from a female perspective. Which is not to say that others might find these parts absolutely captivating enchanting, inspiring, uplifting, exhilarating. I would, however, warn that for anyone who suspects that they might have Neanderthal tendencies, it might be better to give this show a miss and stay safely at home in the cave.