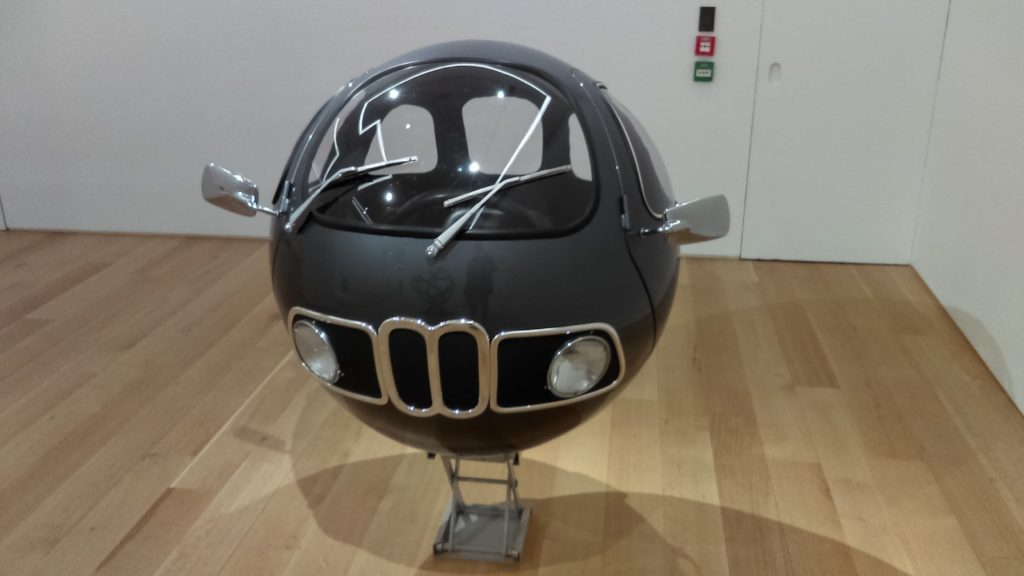 The wintery rains are spattering down as I exit Green Park tube station and by the time I turn off Piccadilly and get to the bottom of Dover Street, ascend the steps and clunk the brass door knocker outside the Spruth Magers gallery, I’m feeling a bit more drizzled upon than I prefer and my spirits are decidedly dampened. It’s a slightly dispiriting situation that’s not improved when I enter the gallery and realise that the young receptionist staring into her laptop screen with such studious intent isn’t going to bother to look up and make any form of welcoming greeting, even when I cross the foyer and approach her desk to pick up the couple of sheets of texts that act as explicatory introductions to the current exhibition. Now, when visiting these smarter commercial gallery boutiques, I don’t really expect to be greeted by a hearty hand clasp and kisses on all four cheeks – I imagine that kind of expression of deeply sincere amicability is extended only to those who might be flattered into making a purchase – but common courtesy and reasonable good manners surely entitle me to expect that even if my discreet smile and subtle head nod are not entirely reciprocated, at least my general presence will be noted by some form of cursory eye contact acknowledgement. 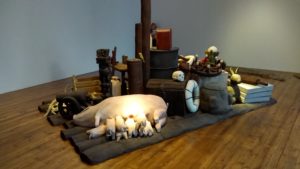 Then again, it does occur to me later that maybe I’ve been had. That, in fact, I’ve just unwittingly walked past the exhibition’s first exhibit and that I wasn’t being rudely cold-shouldered by the insensitivity of an actual sentient being but rather fooled by a hyperrealistic waxwork dummy who was part of an installation entitled Girl Transfixed While Updating her Media Profile. The point being that such a droll piece of contrived semi-Surreality would be entirely in keeping with the kind of works produced by the artistic duo of Fischli Weiss, a small sample of which is currently on display in three other rooms of this very gallery. Well, maybe. Anyway, I’m pleased to say that the mild disgruntlement initiated by the inclemency of the weather and the froideur accompanying my ingress are quickly dissipated when confronted by the extravagant silliness of the complicated polystyrene sculpture that fills the opening space. 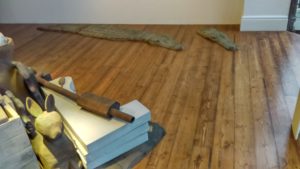 In effect, a random assortment of mysterious objects has been heaped up onto some planks in the middle of the floor, with the ensuing ensemble then assigned the heavily loaded title of Raft which, of course very deliberately, conjures up one of the most famous images in art history – that deeply symbolical representation of human degradation and desperation, The Raft of the Medusa. Perhaps not quite as outrageously cheeky as Duchamp drawing a moustache on the face of the Mona Lisa and making a punning comment on her pulchritudinous personality, nevertheless Fischli Weiss‘ ridiculing of Gericault‘s massive expression of melodramatic excess,by replacing the haunted crew of bedraggled deckhands with a random selection of objects – suckling pig, car exhaust, skull, knapsack, small canon, large vase, sea chest and such like – is still a bit saucy. But what perhaps finally tips the work over into a burlesque parody that some might find just a bit too broad in its giggling smirking humour is the addition of some cartoon crocodiles that are shown surrounding the craft and waiting to pounce on the booty or perhaps make a grab at an unwary gallery-goer. They reminded me of the comic sharks that Kara Walker placed in the pool at the base of her enormous Fons Americanus fountain (still splashing away in Tate Modern‘s Turbine Hall for the next few weeks) and may well represent a potential new sculptural trend, in which case perhaps next year’s Bloomberg New Contemporaries show will be filled with homages to Flipper and Loch Ness Monster look-a-likes from the figurationists, while the more political conceptualists play with slogans demanding that we save the Little Mermaid then, Free Willy and Find Nemo. 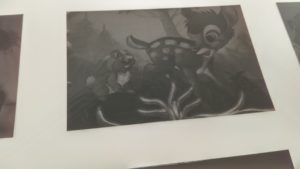 As for the other Fischli Weiss displays, I suppose you could say they’re a little bit darker. There’s a rather demanding hour-long video journey through an unidentified sewer, which I think would have needed the addition of some narrative thread or chase scene theatricals involving Trevor Howard and Orson Welles to make it a more compelling watch. And finally, completing, this entertaining triple bill, is a set of smart shiny white glass cabinets containing dozens of photographs of decorative designs from the exteriors of various fairground booths and rides. By a mixture of careful cropping and underexposing the negatives, these potentially charmingly happy scenes associated with a sense of carefree family joyousness have been transformed into the type of deeply dark and disturbing imagery from which nightmare scenarios are likely to emerge. It sort of plays on the idea of the creepy clown, whereby an icon of childlike innocence and silly simple fun is subverted into its creepy opposite. Not perhaps a wildly original concept but, a bit like the semi-submerged crocs and the thought of the subterranean journey through the drain which never quite reaches the light at the end of the tunnel, an elegant strain of serious unseriousness that at least manages to put a half smile on my face as I exit the space, which was about half a smile more than I had when I entered it. 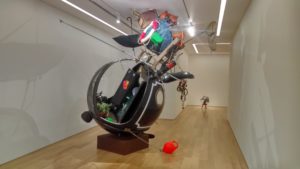 Next on today’s jaunt is a brief step into the Marlborough gallery and a display of very slickly made sculptures constructed under the direction of Lars Fisk. And, by curious coincidence, the first of these looks a bit like a sort of space age update to the Fischli Weiss Raft with a spherical lunar landing pod cut away to reveal its indoor combination of tiny sink, oven and tomato plants while floating away outside is an umbrella, watering can, wheelbarrow, life belt and various other essential pieces of kit required by the well-travelled intergalactic explorer. Other fantasy constructions here include more absurdist riffs – one on a sort of cosy terrestrial cottage, complete with geranium window box; and another based on a tiny shiny automobile vehicle devoid of wheels or any other apparent means of propulsion but nevertheless ornamented by a cute pair of matching window wipers and wing mirrors. 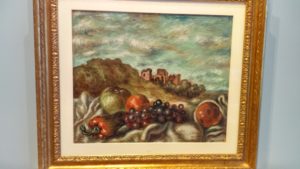 Things start to get a bit more serious across the road at Tornabuoni Art, a gallery that specialises in promoting all things Italian and which today turns a spotlight on the so-called Novecento period of figurative art that ran from around the 1920s to the 1950s. Tarnished to some extent by its early association with Fascism, it’s hard now to spot any obvious overt political propagandising messages and seems to be broadly part of the general European Neo-Classical revival that occurred in the years between the two world wars. Either way, the result here is an interesting display of small paintings, the best of which include some late period de Chiricos (created after he’d moved on from his famous afternoon sojourns among the Torinesean arcades and piazzas) (see above); a pair of Morandi still-lifes with their subtle arrangements of jugs and pots; and some cool Carra landscapes (see below). By way of contrast with these rather refined and successful expressions of artistic conservatism are quite a few more clunky works by Balla (after he’d moved on from his earlier, and much stronger Futurist phase) and other less well known contemporaries. I confess that I wasn’t previously familiar with the stylised designs of Severini or Campigli or quite a few of the others artists from this period that are included in this little display and, to be honest, think it unlikely that their current footnote status will need to be revised upwards any time soon.  Still, on balance, there are just about enough of the more accomplished works on view here to make a quick visit worthwhile. 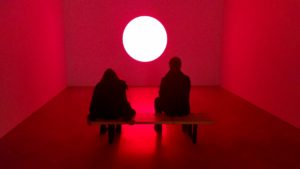 And, speaking of quick visits, I’ve never been really convinced that had I stayed longer – as I know I definitely should have probably done – I would have ever gained any greater appreciation of the light sculptures that James Turrell is currently showing at the Pace Gallery adjunct to the Royal Academy. Apparently, if one gazes for long enough into the slowly evolving parabolic projections of light then not only do the shades of colour metamorphose into different delicate tones and semitones but that an illusory psychedelic subconscious swirl of transcendentally meditative cosmic wonderment infuses into the deepest neuronal recesses of the viewers innermost cerebral folds. Maybe such an experience really does indeed occur but I’ve never been able to force myself to watch long enough to find out and so, just like the Fischli Weiss draining time tunnel travelogue, I’m sure it’s my own appalling lack of patience that is depriving me of a truly transformative experience. 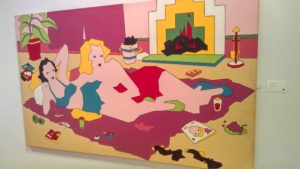 Somewhat more instantly gratifying – to me, at least – are the works of the Them. That being the name given to a loose group of five quasi-Pop Art artist friends now showing at the Redfern Gallery as part of a sort of promotional retrospective revival exhibition. The late Derek Jarman is probably the best known (if least represented here) of the quintet and, frankly, while his small landscapes and dark collages are mildly interesting they probably confirm that he made the right professional decision to concentrate on his gardening and film making career. As for Luciana Martinez and Kevin Whitney‘s large portraits; Duggie Fields‘ smaller, sexy hard-edged graphic designs (see above); and Andrew Logan‘s dramatic sculptural confections (see below), well, all are fun, frivolous and exuberant and so quite out of tune with the contemporary seriousness of much of today’s contemporary art. The accompanying series of photographs show the artists and their entourage dressing down and camping up at various occasions including scenes from some of the notoriously outrageous Alternative Miss World ceremonies that Logan used to co-ordinate some years ago. It all looks like pictures from another time and another world which, indeed, I think it probably was and while I daresay it may well bring happy smiles of nostalgic reverie to quite a few oldies, I think perhaps today’s generation of artists, curators and even some art gallery receptionists might find it all a bit problematical and prefer to keep their noses more firmly buried in the safer spaces of their respective laptop researches. 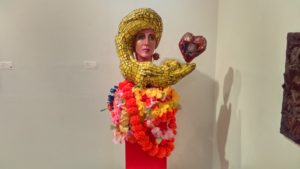