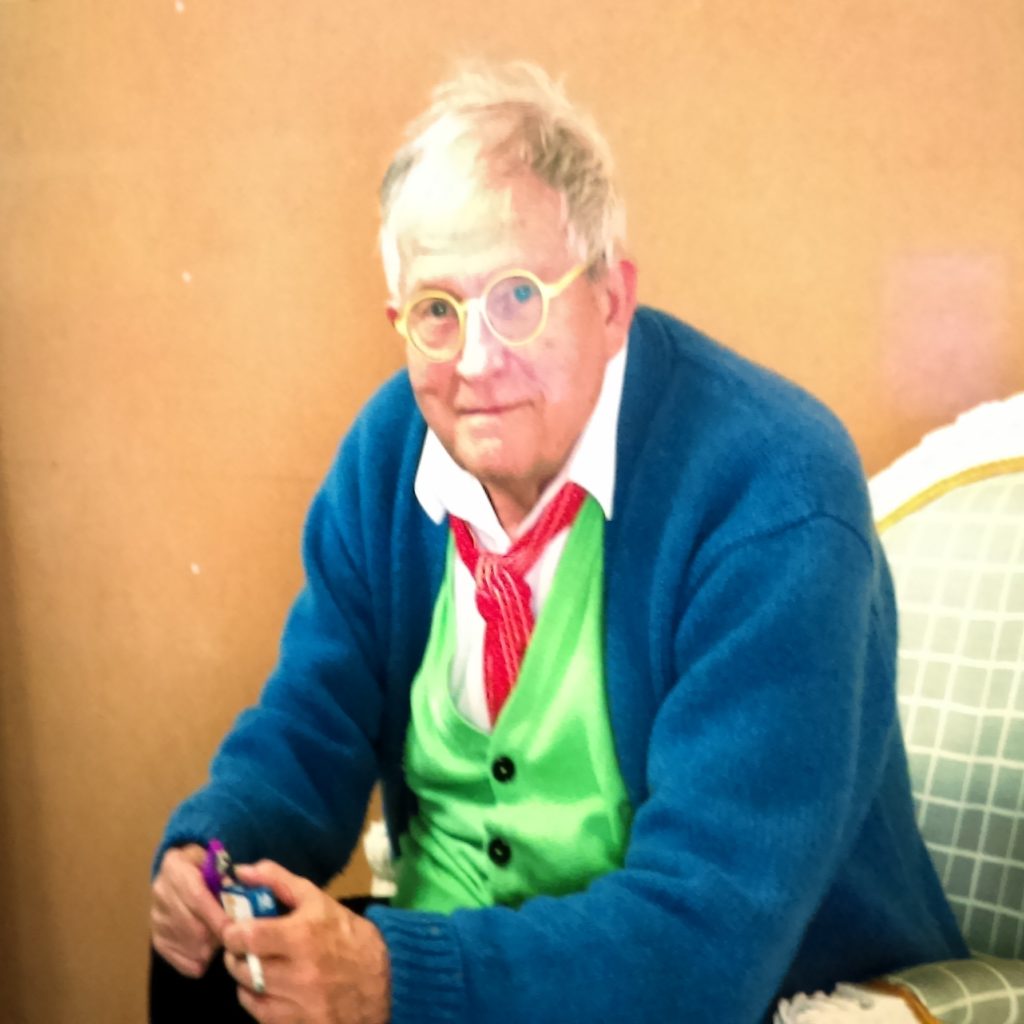 In the past few years he’s had a couple of very big, very well received shows at the Royal Academy and a super successful retrospective at Tate Britain.  An active octogenarian who’s retained both the soft lilting accent of his Northern upbringing and the cheeky mischievous grin that one suspects was acquired soon after his move South to become an art student, he’s also a CH and an OM.  And, even rarer and more impressive for a visual artist, he’s recently been accepted into that happiest of elevated pantheons, the honourable society of the nation’s national treasures.  So, no big prizes for being able to put a name to the Alan Bennett the artworld.  Yes, it’s David Hockney, that lovable boy from the Bradford backstreets, the erstwhile blonde bombshell poster boy of ’60s Pop Art who relocated to the sunny west coast of America to seek a superior tan and promote himself onto the international stage, before more recently returning to his Yorkshire homeland roots and settling down to accept the accolades appropriate to fulfilling his current role as the grand old man of British figurative painting. 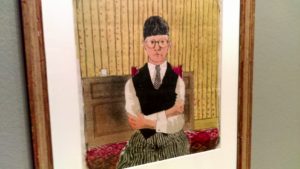 So, what’s he up to now?  Well, this time it’s the directors of the National Portrait Gallery who’ve decided to give him his latest outing, although it seems that they’ve decided the public has probably seen enough of his painted works for a while.  Consequentially, the current new exhibition has been curated to concentrate on his drawings and, more specifically, his works of portraiture.  Which, it has to be said, seems entirely reasonable considering the location of the venue – not that such sensible strategies always necessarily guide the Gallery’s decision-making processes.  After all, last year they put on a big show of Hockney‘s friend the late Howard Hodgkin who is more commonly  categorised as a colourful abstractionist rather than any kind of proper realistic figurationalist. 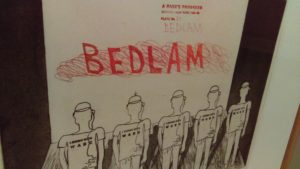 Anyway, getting back to Hockney, the bulk of the current show consists of a mix of portraits of the artist and the honoured trio of Celia Birtwell, Gregory Evans and Maurice Payne – special chums who he’s sketched with considerable consistency, albeit with varying degrees of deliberation, over the past several decades. And I think it’s fair to say that rummaging through the Hockney archives and gathering together a whole stack of different renditions of him and his besties turns out to be rather a pretty conceit, since it offers the opportunity not only to examine the artist’s stylistic evolution across 60-plus years but also his frequent experimentationings with different techniques, whether it’s with pen and ink line drawings, coloured pencil sketches, Polaroid collages or the more recent computerised graphic doodlings with which he seems to have become so unfortunately enamoured. 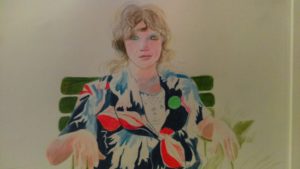 Added to which, of course, there’s the slightly tacky interest in seeing how time’s cruel passage has played its tricks on the faces and figures of all the models.  So it’s rather intriguing to see how pretty svelte young Celia slowly shifts from an innocent  Lady Di lookalike through various fashion phases until she starts to resemble an Ab Fab Edina. In the case of the artist himself, however, the autobiographical alterations and tonsorial tweakings are even more revealing.  And the journey from the  nervous talented schoolboy with the pudding basin haircut through the glamorous golden boy stages to the gray-haired old man squinting back at himself, if not quite Rembrandtian in its poignancy, still holds sufficient dramas to catch the attention of the rest of us fellow travellers who are currently embarked on the same one-way trip. 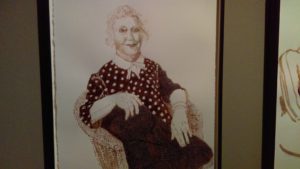 Having said all that, however, I can’t help thinking that the two best portraits of Hockney himself here – and by that I mean those that appear the most vivacious, accurate and truthful – are revealed through photographs taken by other artists.  One, a very large poster print shows a happy dandified Hockney sat on a bench with an older mentor, the former brightest of bright young thing of an earlier generation, Cecil Beaton.  While the other, a much more recent shot by Rineke Dijkstra reveals a confident contented eminence grise who seems to be enjoying every single minute of the current resurgent appreciation of his art and concomitant interest in his life. 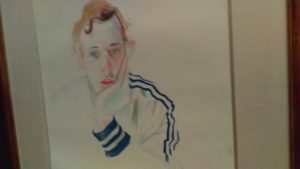 So, what’s the show actually like as a whole?  Well, I’m sure all his many devoted fans will be utterly engaged and enthralled and love every single line and penstroke.  Whereas a more dispassionate observer – and few are willing to be as brutally objective and honest as this particular blogger – may be just a mite more circumspect and less bowled over.  There are certainly a good number of competent and attractive works here to look at here but I’m not sure that there are really very many great ones.  And there’s certainly an argument to be made that Hockney actually peaked very early on in his career when he created the Rake’s Progress series of prints produced during his first trip to the US (also shown here – see Bedlam above) and that everything following on from that has been noticeably weaker by comparison. 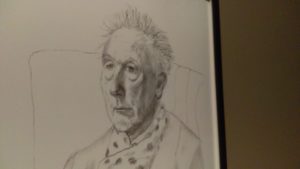 Aside from some of the later full scale paintings, I’m not sure that anything else Hockney produced has ever quite matched the bold imagery and clever narrative complexity of that particularly effective suite of etchings.  By contrast, most of the other items in this show look decidedly tame and often a bit run-of-the-mill, like preparatory sketches and studies for some other bigger more important work that never quite got made – perhaps the visual equivalent of the great American novel that Capote was always writing but never actually completed. 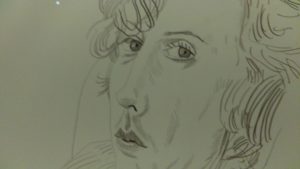 Clearly, when Hockney puts his mind to it and really cares and concentrates, he can come up with exquisitely attractive drawing – not just of people but the props that confirm their presence.  But a lot of the works here look as if they were created when the artist was just relaxing, playing around and Idly passing the time, and then the results can be all a bit nice but average.  Still interesting-ish but not really eye-grabbing – and perhaps not quite deserving the full £18 premiere league price that the Gallery is charging for admission. 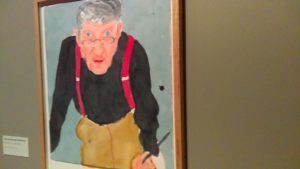 Having just written that last paragraph I did start to wonder whether perhaps I was being perhaps just a little unfair.  After all, Hockney seems such a sweet old man in the photograph mentioned above that even I feel a little reluctant to give him an unnecessary critical kick on the shins.  So, to give him the benefit of the doubt I decided to scroll back through all the photographs that I’d taken of the pictures in the exhibition and double-check these against my general lingering memory of the show which, as I think I’ve probably implied, was a bit on the underwhelming side.  And I think the thing that struck me most when scrolling through the string of shots that I took as I walked around the exhibition was that I’d found so few that were fully focused and tightly framed.  The point being that when I shuffle through shows silently clicking away on my mobile, hoovering up the images, I tend to take two types of shot.  There are the quick cursory pics that I use to act as an aide memoire to help me retain a general recollection of the exhibition as a whole, and then there are the few more carefully considered pictures that I’ll stick in the blog, and that are usually chosen in order to try to show the artists at their best. 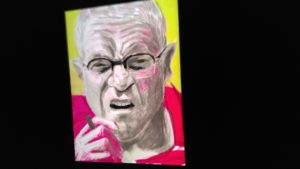 This time, somewhat to even my own surprise, I found myself struggling to pick out enough good ones to fill the spaces between the paragraphs.  To be fair, some of the best of the drawings are pencil sketches or tight line drawings which are too light or otherwise subtle for my clunky old cameraphone lens to be able to digitalise and satisfactorily reproduce.  Whereas even my dated apparatus seems to be perfectly suited to capturing some of the weaker, cruder, rougher works from the Hockney catalogue.  But then, notwithstanding that technological bias, the simple sad fact is that the selection of pictures dotted throughout this blog is, I think, a reasonably representative cross-section of works in the show.  And that being the case, I think I can leave it up to the reader to then determine whether I’ve been too harsh or too lenient in my comments about the artist and the exhibition. 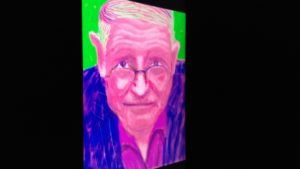 By way of a coda, I will say that it would have been easily possible to create a much more impressive exhibition of Hockney drawings simply by reframing the selection criteria to allow for the inclusion of portraits of a wider selection of models plus the addition of some still-life’s and landscapes.  Although, I suppose that would have then risked a risky critical comparisons with the Picasso Paper show at the Royal Academy where, for £2 more, you can see the works of a true genius, even if the multi-talented Spanish artist was by no means as nice a man as his British-born acolyte. 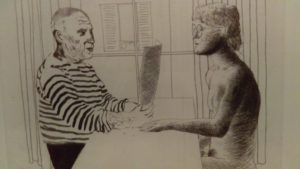