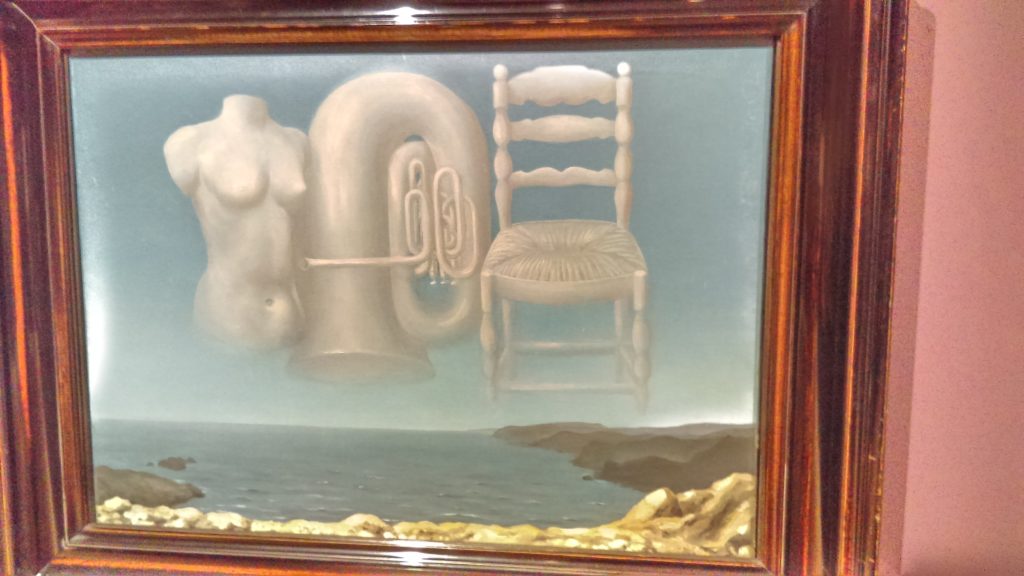 Last week’s blog ended up with me having reached the special Surrealist displays of the Scottish National Gallery of Modern Art and putting things on hold with a fade-out image of one of those iconic Dali lobster telephones (in fact, a rare albino one). So, what better vision of a dreamworld fantasy landscape to restart the journey back through the subconsciousness could there be than that of Rene Magritte‘s Threatening Weather which, despite its rather ominous title, shows what is, I think, a rather comforting cloud formation consisting of a sculptural bust, an over-sized euphonium and a wicker-seated dining chair, all hovering above the view from Dali‘s home in Port Lligat. Apparently, it was actually painted by Magritte when he was staying as a houseguest of Salvador’s, although the pair of them together – the straight-laced bowler-hatted Belgian and the mad Spaniard with the extravagant moustache – suggest an even odder couple than Oscar and Felix, or an even more ill-matched one than Vincent and Paul. No matter, it’s still a great painting and happily situated among a nicely comprehensive display of works from most of the other main members of the Surrealist brotherhood (plus one female associate). So, among the disconcerting little treasures here are some of Tanguy‘s biomorphic landscapes; a pair of those comedic Delvaux Gothic nightscapes, a couple of early Miro whimsicalities that contrast with the heavier darker broodings of the nearby Ernsts and, finally, a great shaggy dog love story from Dorothea Tanning. In light of the location, however, it seems only fitting to picture below The Birth of Venus, a not-so subtle seascape from the lone Scottish Surrealist Edward Baird. 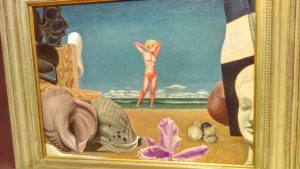 As mentioned in the previous blog, these Surrealist displays come after other rooms that similarly group works together by styles or movements like Expressionism, Cubism, Abstraction and Figuration. It seems to me to be an eminently sensible way of dividing up a collection and giving it the sort of broad comprehensibility that can be appreciated across the full spectrum of visitors from those who know lots to those who know little, but wish to start learning more. Whereas twenty years ago this generally chronological taxonomic division was typical across all the major collections of Modern Art in galleries throughout the Western world, today it seems to be getting increasingly rare and the fad started by Nicholas Serota with the opening of Tate Modern, wherein works are grouped haphazardly together under the vaguest of meaningless thematic criteria, has started to become the unfortunate consensual norm. Hopefully, the curators here will continue with their rearguard actions to retain the logicality of their current display policy and not succumb to the baleful peer pressures of most of their misguided associates. 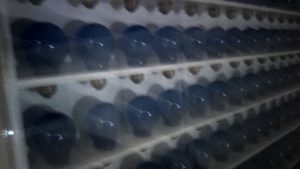 Having enjoyed the ramble round the excellent permanent collection upstairs, I confess thinking that the almost equally large ground floor area devoted to changing temporary shows would probably be filled with one of those dreary half-baked installational exhibitions in which some promisingly bright but very young artist is given far too much space and then struggles to fill it with anything very interesting. It was, therefore, a really rather pleasant surprise to find that the dozen or so display rooms here have, in fact, been saturated with a succession of proper, seriously sensible Conceptualist pieces, the neatness of whose intellectual conceits have been matched by the carefully considered attractiveness of their presentation. Katie Paterson is the artist whose praises I am happy to proclaim and whose work I now feel obliged to try to describe, pigeon hole, summarise and categorise. The problem being that I kind of think that the very nature of this crude process of textual distillation is going to have the effect of reducing the intriguing magical sparkle of the artist’s work rather than enhancing it – so, apologies in advance. 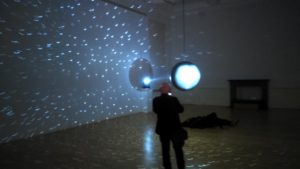 Suffice to say that Paterson‘s creations are like a series of elegant scientific illustrational experiments designed to reveal various cosmological truths. I won’t list the full inventory but hopefully sufficient to confirm that there are at least a few Conceptual artists working out there whose concepts are actually worth thinking about and looking at and then perhaps thinking about some more. So, among the results of these thought experiments are the open crate of 269 special lightbulbs that have been designed to shine with the same luminescent wave frequency as that of moonlight – the number of lights in the stack having been calculated as being sufficient for the lifetime’s supply of one moonstruck individual; the grand piano that plays a version of Beethoven‘s Moonlight Sonata that, having been transcribed into Morse Code and been bounced to the moon and back, is fractured with interference and with missing notes; the simple string of lights in which the brightness of the various bulbs have been set to match those of the stars of a nearby constellation; and the rotating disco mirror ball that reflects images of every solar eclipse ever documented. 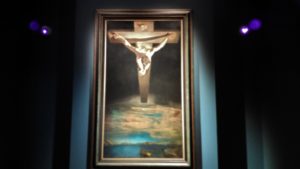 The following morning I’m heading off on the hour-long train journey to Glasgow and then the long walk up and beyond the gentle incline of Sauchiehall Street to get to the great Neo-Gothic pile that is the Kelvingrove Art Gallery and Museum. And first stop is to pay homage to what is perhaps the single most famous painting in the Gallery’s collection, Dali‘s Christ of St John of the Cross. For cultural pilgrims such as myself, this is one of those great secular relics that really is actually worth taking the trouble to track down and, indeed, anyone thinking of compiling a bucket list of specific individual items among the UK’s Modern Art treasures to tick off the list should definitely include this (alongside Schwitter‘s Merz Barn Wall in Newcastle; Epstein‘s Rima sculpture in Kensington Gardens; and…well, perhaps now is quite a good time for all of us to consider making that valedictory visiting list and then preparing a plan to tour around it when the current travel restrictions finally get lifted). But back to St John and the beautifully executed foreshortening of the figure that’s an example of one of the Dalinean trademark technical skills that the master painter liked to show off to amuse his fans and annoy his detractors. According to texts on the accompanying explicatory wall panels, the unorthodox view of Christ is meant to echo that seen by a penitent when presented with a crucifix but I’ve always preferred the alternative, perhaps more believable, suggestion that Dali chose to place himself in the position of God looking down on the world below. Incidentally, the landscape at the base of the painting is meant to be the view from Dali‘s house in Port Lligat, although I guess he must have been looking out from a different window than Magritte since the two views that the artists painted are strikingly dissimilar. 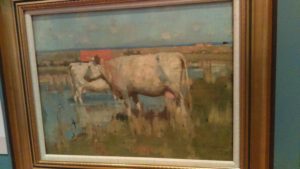 There are plenty of other good things to see here at Kelvingrove including a pleasant selection of Impressionst works and an especially nice little line of small paintings showing how Renoir, Cezanne, Braque and then Matisse painted their still-lifes, each with their own varied assortment of different fruits, bowls and other props. But it’s the other rooms that specifically concentrate on the works of Scottish artists that are perhaps the main attraction and, in particular, those that feature works from the two groups that are probably not as well known or acknowledged south of the border as they should be. The first of these being the so-called Glasgow Boys, a loose grouping of twenty or so painters working around the last quarter of the 19th century. What united them seems to be less a commonality of style or preference for any particular subject matter, than a generally shared attitude of optimistic experimentation that welcomed the new artistic freedoms allowed for in the less restrictive Modernistic art that was starting to gain favour in Continental Europe. So there’s quite a mix of works in this section, covered in a wide range of early Impressionistic stylings from the wonderful simplicity of Joseph Crawhall‘s majestic white cow (see above) to William Kennedy‘s congregation of twilight rail commuters gathered together at Stirling Station, and from the bright charm of a pretty James Guthrie‘s beach scene to the darker restraint of John Lavery‘s portrait of a Bengali potter holding a jar (see below) – a work that seems to echo Renoir‘s famous portrait of Vollard, despite predating it by twenty years. 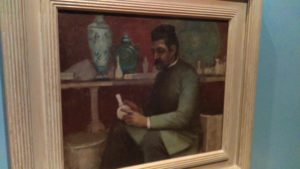 Somewhat more daring and radical were the Scottish Colourist quartet of the next generation. Indeed, I’m not sure that any British artists of the time come anywhere near matching the bold, almost Expressionistic, offerings of Fergusson, Peploe, Cadell and Hunter and it’s a great shame that their works are not much better represented in the national collection at Tate Britain. 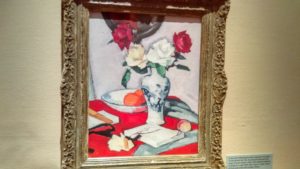 Sadly, lack of space limits me to showing just two examples of their output – Peploe‘s Roses (above) and Cadell‘s Lady in Black (below) – but, both painted around 1920, I think these works give a good indication of the exciting radicality of Scottish art at the time. 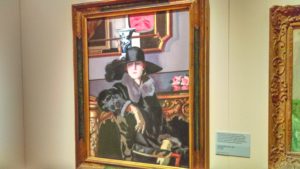 As for the Museum side of Kelvingrove, well, there’s quite a range of entertaining and informative attractions, not least the real life Spitfire suspended above the cafe, the great menagerie of stuffed animals and the very handsome display of Rennie Mackintosh furniture and fittings. But time is running short and I’ve still got one final gallery to visit which, thankfully is only a ten minute walk away. Although, by the time I enter the Hunterian Art Gallery, pushing apart the groovy aluminium entrance doors that were specially decorated by Eduardo Paolozzi using his characteristic machine part colagings, I’m starting to feel a bit arted out. There’s a really fizzing Fergusson of crazy nude dancers to start things off (see below) and then a whole range of interesting eclectic delights from Chardin to Corot and Kathe Kollwitz to Ellsworth Kelly, plus a wonderful Gillray caricature of A Cognocenti Examining ye Beauties of ye Antique and lot of assorted Whistler portraits, nocturnes and even a cartoon from his notorious Peacock Room. Alas, I just don’t have the mental or physical energy to pay them all the attention that they very much deserve. And, anyway, I’m starting to feel like it’s time to get back home. The government is starting to mutter about introducing travel restrictions and, much as I like the views up north, I don’t really want to get quarantined here. 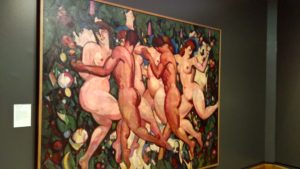 Concerned readers will be pleased to know that I did successfully manage to get my train home and, just before the lamps stated going out, managed to make one final gallery-going ramble – the record of which is scheduled to appear in next week’s blog. 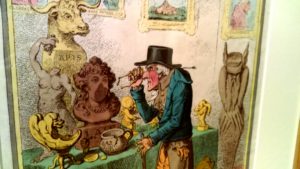