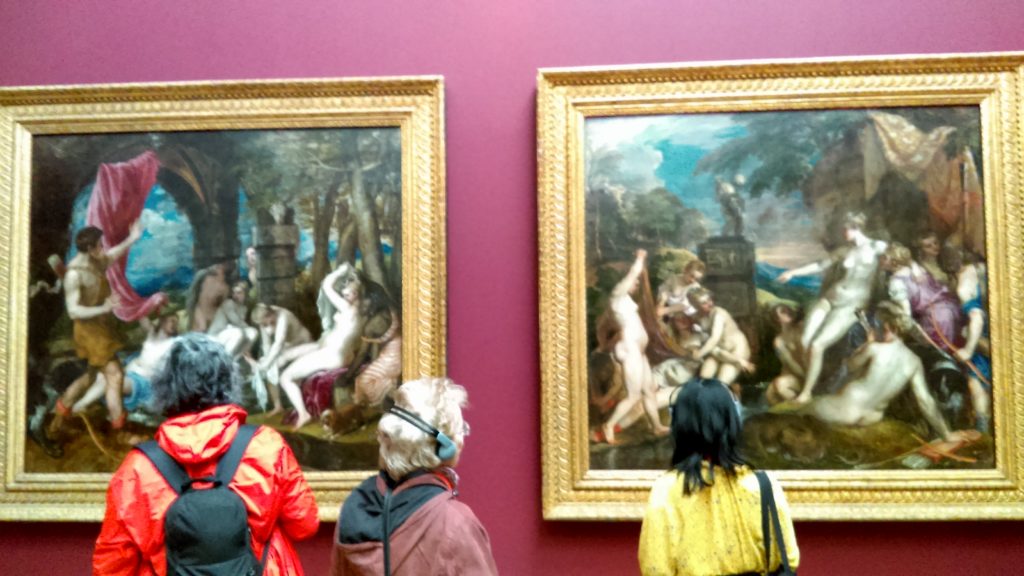 Head down to Piccadilly today…

And today, in this case, is about three weeks ago so that the full lockdown hasn’t yet come into force but it’s clearly on its way and the capital, so renown for its bustling streets and continuous crowded swirl of amorphous humanity, while not completely empty, is notable for the striking sparsity of its pedestrian population. A few brave, or foolish, folk are still making the effort to go out and see some art but within a day or so all the art galleries in London will close and by next week just about everything else will follow suit.  Consequently, this blog will also soon go into hibernation for the foreseeable future but, before emulating Proust and retiring to my bed with the TV remote and a big box of cakes, I thought I’d make some brief general comments on a couple of the big shows that opened recently and then get back to today’s final cultural ramble. 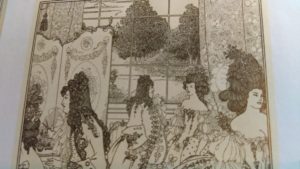 And so it was that a few weeks ago, I paid cursory visits to both the exhibition of graphic work by Aubrey Beardsley at Tate Britain and also wandered Among the Trees, which is the large mixed thematic show filling both floors of the Hayward Gallery. I had hoped and, indeed, expected to return to both shows to take more considered looks at the displays before distilling my thoughts into the usual pungent textual substrate but, alas, that seems unlikely to happen any time soon. Which means that I’m just left with the slight fleeting first impressions sparked when I raced around the exhibitions just after they’d opened back at the beginning of March. 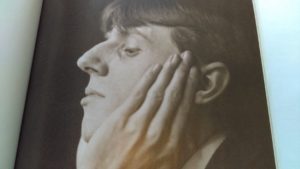 The Beardsley show seemed very much designed to mimic the previous recent presentation of works by his eminent predecessor, that other great graphic artist, William Blake. And I think a reasonable essay could very likely be written about the surprising similarities between these two very dissimilar artists – one a somewhat louche, hedonistic dandy and the other a much more seriously spiritual and political proselytiser – yet both, in their own ways, notable for sharing the same sort of free-thinking radical individualism that made their works so very interesting. Both were also dedicated to their craft, technically very proficient and extraordinarily prolific in their output with, I suppose, Beardsley taking the honours since he now manages to fill the same square footage of Tate Gallery space with works created during a working life of little more than a decade while Blake had more than half a century to fulfil his own impressive quota. 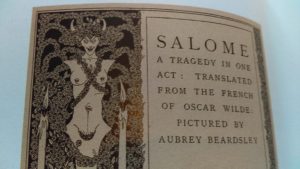 Although, herein lies the root of the problem with both of these exhibitions. That being the fact of the curious curatorial conception here at Tate Britain that evidently seems to think that the more extensively comprehensive a show manages to be then the better the viewing experience will also be. As if the more madeleines that Marcel managed to stuff down his throat, the greater would be the resultant epiphany. As it is, filling room after room with intricate artworks, each of which deserves detailed deliberation – whether they’re Blake‘s blurry mystical prints with all their attendant tiny calligraphic scribblings, or Beardsley‘s precision cut plates with their own decorative filigree ornamentations – simply overwhelms and exhausts the concentration of an audience even before the half way mark has been reached. Simply put, had both of these displays been smaller, more select shows then both would have been much improved with the overall exhibition experience made much more enjoyable – ok, so we might have missed out on seeing some items of particular specific interest but after a certain point everything starts to blur together now anyway. 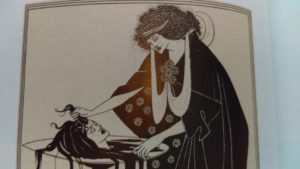 Having said that, it’s still very sad that so few people will now get to see the show, especially after so much effort has evidently been put into gathering together every single inky scratch that tripped off the nib of Beardsley‘s pointed pen tip. But then there’s always the accompanying catalogue to look through and while perhaps there’s some silly artistical kudos in being able to say that one has seen originals of the artworks, it could easily be argued that since most of the prints were created for periodical perusal anyway, this is a more appropriate way to examine their lineal intricacy. It also means that one can examine the works’ sometimes scandalous subject matter at one’s own leisurely pace rather than having to keep moving around a gallery pressurised by the approach of other peering plodders. Some might also understandably prefer to scrutinise the subject matter in private rather than risk the embarrassment of being seen to be too publicly examining examples of the more prurient details that Beardsley seems to have been particularly attracted to delineating. 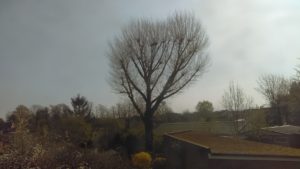 As for the Hayward Gallery, well, without wishing to be too unkind during these trying times, I’m not sure that missing the chance to get to see their latest exhibition will be any great loss. I suppose with all the general popular interest in matters concerning the climate, ecology and natural world phenomena, the Hayward thought that a show themed around trees might well attract an audience beyond the usual urbanite gallery-goer and extend to embrace a wider population of other would-be naturalists and nature-lovers. And, indeed, had the curators delved back into the past and included more examples of figurative art rather than concentrating so much on recent Conceptualistic experimentations, they might have produced a real winner. Turner, Constable some Impressionists, Ernst, Nash, Sutherland, Hitchens, Hockney…a little research could have produced a really rather spectacular show. But instead of that refreshing putative walk in the country, my quickly fading impression remains that of being stuck inside a dusty lecture room looking at a slide presentation of images that are meant to illustrate something confusing about trees that I can’t quite be bothered to untangle. Why does Penone go to all that trouble scraping away the bark to reveal the way the knots grow into branches? Why does Rodney Graham insist his pretty photograph of an oak tree be hung the wrong way up? Why does Robert Smithson dig up trees and then replant them upside down with the roots withering in the air? And why does Eija-Liisa Ahtile‘s video show her spruce growing horizontally? These are just some of the questions raised by the Hayward show that now seem destined to remain hanging in the air as, I suspect, is the more pressing question of when the Hayward is going to start to stage a more interesting programme of exhibitions? Aside from the Bridget Riley retrospective, the recent run of shows has been a little bit dull and I wonder if it’s time to refresh the place by finding a new director. 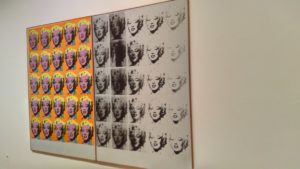 Which finally gets me back to the today that started off this blog although, for reasons that will be explained later, I’m going to reverse the actual order of my final ramble and start off with a look into the Andy Warhol retrospective at Tate Modern. This was a show that got a lot of pre-publicity boosting and I confess that such a concerted promotional effort even managed to engender in me a little anticipatory thrill and the expectation that this might be a show of some exceptionality. I suppose I thought that or, rather, hoped that, there would be some clever curatorial innovation that would somehow manage to make the great artist of the ’60s gain a specific relevance pertaining to our new current social media age. And, I do have vague memories of a very interesting Warhol retrospective back at the Hayward about a decade ago that was along these lines and particularly focussed on his films and TV work, his magazine publishing and some of his more obviously commercial self-promotional activities. Alas, the Tate show seemed to me to be just a very basic, very straightforward chronological retrospective working diligently and unimaginatively through the artist’s life from Brillo box to Coke bottle, from Marilyn to Elvis, from Electric Chair to Last Supper. And while the show is very neatly laid out and confirms that Warhol did indeed produce a still surprisingly consistent slew of iconic imagery, I think an opportunity has been missed to really emphasise just what an unlikely revolutionary prophet he really was. And in that respect, the show really is rather a disappointment. 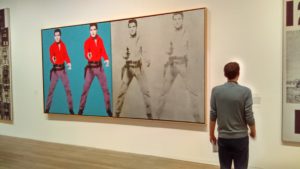 So, finally, and not wishing to end this run of nearly five years worth of blog postings on a downbeat, I’m going to reverse back to what was, in fact, the first show that I visited today, and that was at the National Gallery where a single large room now houses seven large works by Titian. The group of paintings, which all illustrate characters and stories from the classical myths of Ovid‘s Metamorphoses, were originally commissioned by Philip of Spain in the mid-16th century and are now reunited for the first time in over four centuries. And I think they’re great. As the Renaissance equivalent of stills from the Marvel Comic movies of today, it’s just all such a lot of silly blockbuster fun watching a dynamic cast of amazing superhero characters engage in a series of extravagantly plotted stories with lots of sex and violence all rolled into an intriguing mix of messy moral messaging. 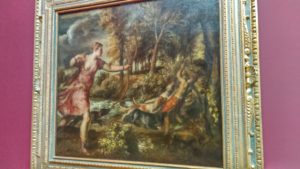 So, when Actaeon, after a morning out hunting with his mates, goes off exploring in the woods on his own, who should he surprise but Diana bathing alongside her sorority of lovely naked nymphs? Understandably, goddess is somewhat irked at being ogled by a mere mortal and so, in a powerful fit of feminist rage, promptly punishes the voyeur by turning him into a stag who then gets hunted down by his own hounds (see above). 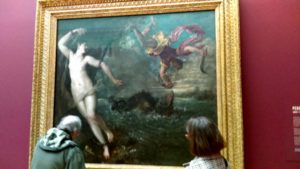 And then when Cassiopeia carelessly announces that she considers herself to be more beautiful than all of Neptune‘s nymphs put together, her boastful arrogance is punished by the old bearded god of the sea who chains her to a rock as a sacrifice to the sea monster Ceto. Fortunately, however, Perseus (the Tony Stark of his age) happens to be flying by, spots the distressed damsel, fall instantly in love with the soggy vision of bondaged loveliness and rescues her (see above). 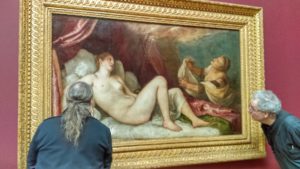 Each of the other stories that Titian illustrates here are similar luridly exciting tales of men and women behaving foolishly and gods and goddesses behaving badly and which together provide the perfect subject matters to allow the artist to show off his skill in bringing to life the drama and passion of the various madly mythical situations. It is all absolutely fabulously nonsensical but great escapist entertainment and full dashing heroes and beautiful heroines fitted into clever compositions replete with interesting character actor extras, fantastic props and set design details over which the discerning eye may happily linger. Unlike the works of Beardsley and Warhol, which reproduce well on the pages of a catalogue or magazine (and trees that are probably more appreciated anyway when left in their natural bucolic setting), Titian‘s series of great big energetic paintings really do look at their best when hung all together around the walls of a gallery. 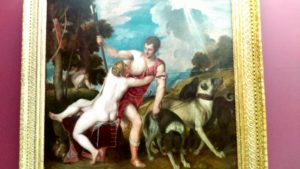 Consequently, I feel very lucky in having managed to get to see all these great works just before the Gallery had to close down its doors.  Hopefully, it won’t be too long before they’re able to open them up again and let everyone else in to take a look, if not at these particular Titians then at all the other amazing stuff they’ve got hanging around the place. 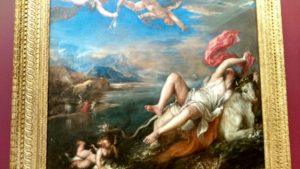 In the meantime, following Government advice, sadly the rambling now has to come to a temporary stop…

One response to “Artistical Kudos”