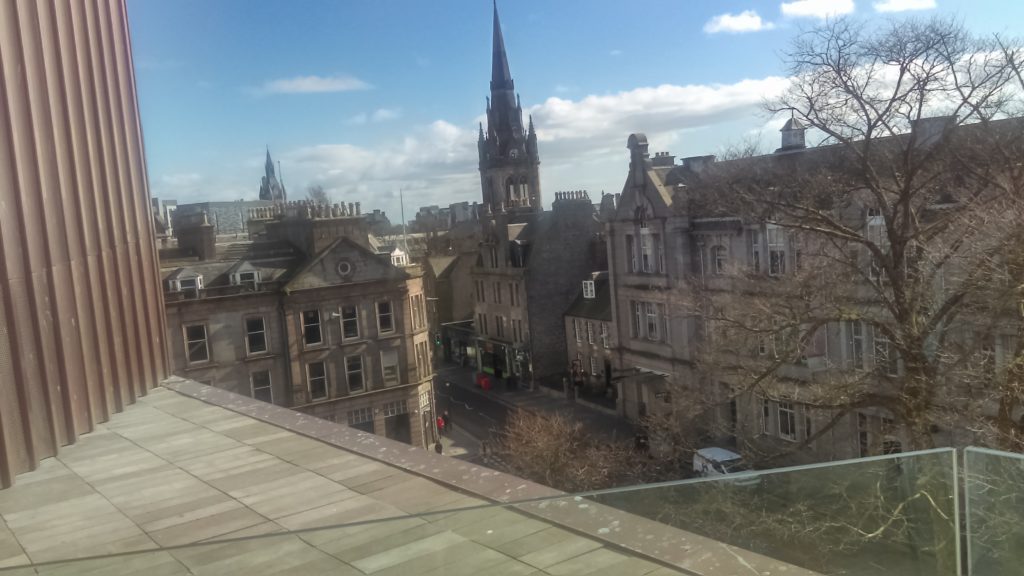 Most of yesterday…and before going any further, I suppose that I’d better explain that yesterday, in this particular case is, in fact, almost two weeks ago, when things were still fairly normal and definitely before the deadly carnivorous anagram really started to take hold, turn the world upside down and give it a nasty shake. So, let’s jump back a fortnight together to that other, simpler world and start again… 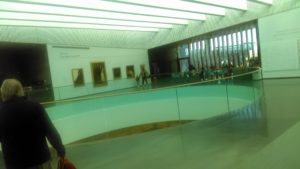 Most of yesterday was spent on a rather boring eight-hour train journey – it should have been only seven-and-a-half-hours but an earlier train ran into some sheep that had unfortunately been loitering on the track, so the driver had to stop and clear away the debris. I think the length of the delay means that I’m entitled to a fare refund but maybe they’ll just send me half a dozen lamb chops instead. In any case, when I wake this morning, I find myself in sunny Aberdeen and, for once, the adjective comes completely without irony for, quite unexpectedly, the skies are indeed a shade of happy azure blue and golden rays of cheer are beaming down as I walk towards the city centre’s recently reopened art gallery. It’s many years since I last visited here and my memories are consequently rather hazy but I’m not sure that I was all that impressed by either the architecture of the building of the curation of the displays. So, what is the result of the four years of reconstruction work? And has the £30m invested in the cost of the project been well spent? So many of the extravagant gallery refurbs and redesigns that I’ve seen over the past few blogging years seem to have been so dreadfully poorly planned that, I confess, my expectations are concomitantly low, fearing that the results will be as pointlessly unnoticeable as the Hayward‘s recent multi-million pound refit or as ludicrously ill-envisioned as the Kettle’s Yard absurdity, that resulted in a greatly enlarged shopping facility and the addition of a totally unnecessary cafe but a consequent reduction in the actual display space of the gallery area! 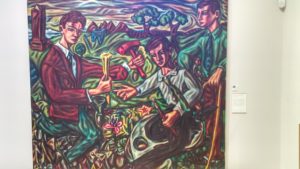 I am, therefore, especially well pleased to be able to report that Aberdeen’s redevelopment seems to have been a pretty much totally unqualified success. And, while I’ve no idea whether it was good value for money or not, the main changes – alterations to the roof to introduce an atrium feature plus smart new internal staircases and the addition of some decorative metal ornamentation on the outside – seem to have utterly transformed the building from a typically tired, dark and dreary provincial gallery space into somewhere bright, airy and attractive to visit. Following the fads of current curatorial practice, perhaps a little too much effort has been spent on the kind of desperate pedagogic gimmickry that aims to divert the attention of schoolkids away from the screaming screens of their mobile phones and on to the walls of the gallery, but in general the displays are really very well presented. After all, rehanging what is a bit of a mish-mash collection of various artworks, old and modern, that has been assembled over the past century-and-a-half under various different management structures and directorial regimes, cannot be easy. And yet, while the difficulties of trying to impose a generally coherent structure onto to an otherwise reasonably randomised clutter of cultural artefacts must be akin to trying to squeeze a large octopus into a small pint pot, the curators have actually managed to do a pretty good job of aesthetically aligning all the cephalopodic tentacles. By contrast, I’m not so sure that I’m going to be able to compress an accurately evocative description of the range and qualities of all the various displays on show into the confines of the following brief paragraph. 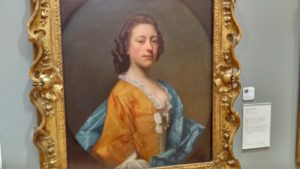 Nevertheless, I think it’s fair to say that when it comes o the art, there are one or two exceptional works, lots of very good stuff and only a comparatively few real duffers. And while the representation of works by Scottish artists is, I would think, sufficient to satisfy the native nationalistic tendencies of most of the indigenous population, the broad wider European sweep of Modernistic art is also recognised and appropriately reflected in most of the galleries. So, there’s a good chunky Paolozzi sculpture to start off with and then, along with works from the old Scots colourists like Fergusson and Peploe, there are items from the newer Glasgow Boy Romantics like Wiszniewski (see above), Conroy and Howson. The displays continues this strong tartan streak, emphasised through specific rooms devoted to the Balmoral Phenomenon and spreads featuring local hero James McBey, but there are also a dozen or so other rooms with more general generically themed displays which allow for a comfortable mix of works from both unfamiliar (at least to my Sassenach-centred sensibilities) Scottish artists as well as the contingent of internationally appreciated names that are expected to be present in all decently-sized city art gallery throughout the realm. At which point, I suppose I could list a good score and more of relevant candidates but, for reasons of space, I’ll reduce the representational roster to Allan Ramsay (see above), Henri Fantin-Latour, Claude Monet, Stanley Spencer, Bridget Riley and Francis Bacon and, by emphasising that the works from these artists are not just fillers but all top quality merchandise, hope that this gives a reasonable enough indication of the breadth and attractiveness of the displays contained therein. Which leads to my one solitary gripe, in that the Bacon, one from his series of great Screaming Popes, is currently squashed into a corner space and awkwardly foregrounded by some kind of odd children’s dressing-up play area. A prestigious work of such magisterial or, rather, pontifical importance (not to mercenarily mention that it’s probably worth about double the cost of the entire renovation project) really does deserve to be more satisfactorily and prominently displayed. 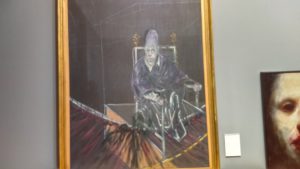 Unfortunately, the main temporary exhibition spaces was closed for the installation of the forthcoming show by Haroon Mirza which, judging by the preview information, looked as though it was going to be one of those fairly serious, sterile and less than comfy Conceptualist installations. So, maybe having to forgo that particular dry entertainment and instead substitute it with a coffee and cake in the adjacent cafe area wasn’t such a bad alternative use of my limited time. 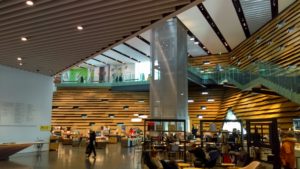 Alas, after that remarkably good start to my exciting Scottish adventure, along with the next day comes a somewhat depressing intermission. Hitching a lift southwards from one of the friendly local Aberdonian natives, I depart the warmth of that unexpectedly energising city to arrive about an hour later in Dundee. And here the wind is whistling a more ominous tone as it blows off the chilly sea that forms the picturesque backdrop to the recently opened V&A Dundee, an outpost of London’s Victoria & Albert Museum that, I assume, has been sited in this particular location in an attempt to emulate the so-called Bilbao effect. The idea being that large, formerly vibrant locations that have started to suffer from the various economic and societal consequences of globalistic post-industrial decline might, just like the eponymous Spanish city, be revitalised by the imposition of a new prestige cultural attraction. An apparently essential prerequisite being that the museum or concert hall or whatever must be an architectural construction of such extravagantly exotic nature that it would, of itself, become not just a striking landmark but an enticing destination to attract an audience of the curious that would extend well beyond the usual minority of culture-seeking middle classes. And that it would then gradually become the well-loved favourite of an initially suspicious local populace plus an essential visitor attraction for all those bucket-list travellers, both national and internationalists, who have the time and inclination to make pilgrimages and pay tribute to such cathedrals of entertainment. And, further still, that it would then act as a regenerative hub, encouraging an assortment of other smaller entertainment venues, coffee bars, pizza houses, souvenir shops and the like, to spring up which, in turn, would transformatively revivify the location by making the wider geographical locale more appealing to young start-ups and other commercial entrepreneurs who might be looking for suitably special situations to set up their own small businesses. As far as I’m aware, in Bilbao all those good things actually did come to pass just as promised so it’s easy to understand why so many other places have tried to spin a similar virtuous circle. 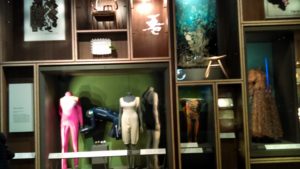 Few have succeeded and, sad to say, I don’t think Dundee has the remotest chance of joining that select group. Not that their brand new building hasn’t followed exactly the right design strictures to construct an appropriately ridiculous, overblown, flashy, nonsensical, unforgettable, Post-Modernistic hulk. It’s just that the trustees, directors, councillors, or whoever is meant to be in control of the overall project, seem to have forgotten that, unlike the original more spiritual precursors, which needed only one or two small relics and the promise of daily ceremonies to attract a continual stream of visitors to add to the regular local congregation, nowadays galleries and museums need to be filled with a lot of interesting stuff to look at, captions to read and buttons to push. In olden days people might crawl on their knees to see a saint’s bones or a bit of the cross and be overwhelmed at the sight of coloured light spilling through stained glass windows, but when every conceivable, and many inconceivable, sights and scenes can be viewed on screens big and small every minute of the day, expectations are understandably higher. And, most bizarrely, the V&A Dundee for all its vast exterior actually contains just one small dark box-like exhibition space with absolutely nothing very exceptional or memorable inside to look at. Even the promised highlight of the full-scale reconstruction of the Rennie Mackintosh Tearoom, which actually takes up about a quarter of the available space is, quite simply, disappointingly dark, gloomy and uninteresting. Frankly, the whole thing is a bit of a disgrace and impossible to recommend that anyone should make the effort to visit. 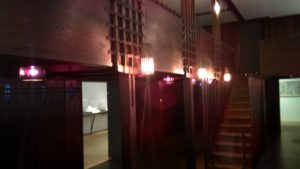 Across the road is the DCA not, I hasten to add, any relation to the Doughnut Company of America, whose factory I once use to regularly walk past many years ago en route to the place of my own manual labouring employment. No, it’s the Dundee Contemporary Art space which , indeed, has a large exhibiting area and a current show loosely themed around the Ursula K Le Guin novel The Left Hand of Darkness. I’ve not read the book but, according to the gallery guide, it ‘poses questions about gender, sexuality, the environment, language, communications, power and empire’, It sounds like it would be ideally inspirational for today’s concerned young Conceptualists and had I had more time – and not been so deeply dispirited by the disappointment of the wasted visit to see the V&A D – I would perhaps have enjoyed the displays more. Sadly, however, the needs to grab lunch here (and the DCA restaurant can be highly recommended) and then race off to catch my next train, meant there was insufficient time to do justice to what a very cursory inspection suggested was a bit of a dull showing anyway. Fortunately, I managed to get the train just in time and so, about ninety minutes later, reached Edinburgh, from where next week’s blog will continue the travelogue, or should that be blogelogue? 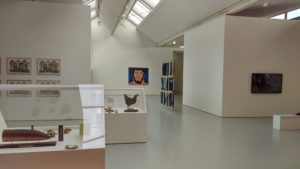 One response to “Carnivorous Anagram”