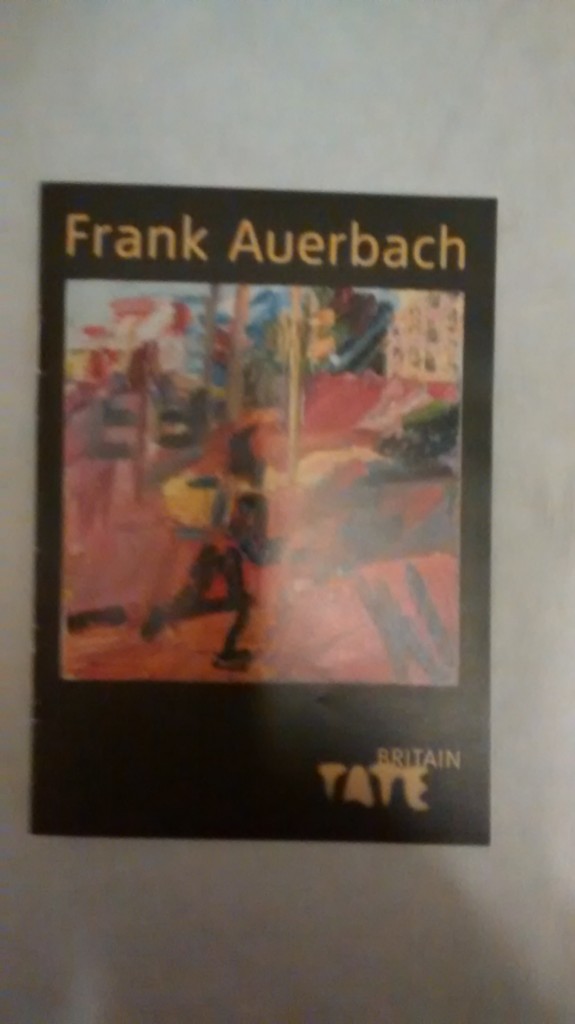 I meet Gill at Tate Britain and take a look at the Frank Auerbach exhibition.

The question arises as to whether Auerbach is now the greatest living British artist?  Well, aside from the fact that he was born in Berlin*, at age 84 he’s probably the most eminent and respected, not least because his work exudes such an air of professional dedication, artistic struggle and all round seriousness.  With the demise of Bacon and Freud, Auerbach is probably the last of the great pre-Pop Art generation of painters still alive; those who came from an era when artists wore furrowed brows and strove to be intellectually rigorous and hoped to be treated with respect.  Of course, all that changed when Pop came along in the early ‘60s, launched with Richard Hamilton’s prescient declamation that art should be, amongst other things, ‘witty, sexy, gimmicky and glamorous.’  Auerbach is none of these things.  Instead, his work appears the absolute embodiment of Beckett’s famous artistic dictum…Try again.  Fail Again.  Fail better.  And, apparently, Auerbach’s method of working really does involve him adding layer upon layer of paint during the course of the working day and then at close of play deciding whether to let it stay or scrape it all off ready to begin from scratch again the next day.

But to what effect?  Well, after the first room of particularly gloomy works from 1950s post-war austerity Britain, Auerbach lightens up a little and finds a style that varies very little over the next half century.  What we get is a series of relatively small canvases containing intense variations on a small theme.  Auerbach trowels on the paint to accumulate a great impasto sludge which is then churned up and moulded into shapes that, with the addition of a few crude lines, are just sufficient to suggest a head, the view from the studio or a row of shops.  Frankly, without looking at the titles, it can sometimes be difficult to tell whether one is looking up Primrose Hill, down Mornington Crescent or round the corners of his favourite muse Catherine Lampert.  And this rather begs the question of what is the point of painting a street scene that doesn’t look much like the street or even more peculiar, a portrait when it doesn’t really look like the sitter.  If you didn’t know what he looked like already then the Auerbach portrait of William Feaver (former Observer art critic) isn’t going to help you pick him out of a police lineup.  But if not realistic representations, are they Expressionistic – do the works somehow suggest the personality of the sitters if not actual physical likenesses?  Again the answer has to be in the negative.  Feaver, for instance, is a quiet, sensitive intellectual, whereas the painting makes him look like Eccles from the Telegoons, a comical, jug-eared grotesque.  Not Impressionistic, not Expressionistic, Auerbach seems almost to be refighting the old Modernist battles that occupied Cezanne, Picasso, and very early Mondrian:  how do you represent the three dimensional world on a two-dimensional canvas, how do you show the hidden superstructure behind the superficial surface reality?

If this is what he’s after then I’m not sure that Auerbach succeeds and yet, and yet…it’s undeniable that the paintings do have something.  The oil paint may be mixed up to a right old mess and yet the colours are not the mud one would expect but remain subtle and harmonious.  And while the portrait heads are as random and crudely delineated as the streetscenes the eye is compelled to keep looking at them to try to find form and coherence from within the chaos.

It’s an exhibition that requires a second look, to try to figure out exactly what he’s up to.  And probably best to go back alone since Gill talks so loudly and so animatedly that our private discussion of Auerbach’s merits and failings attract grumpy looks from the rest of the Tate visitors, who clearly would prefer to examine Auerbach’s output in an atmosphere of quiet contemplation rather than noisy argument.  And that’s fair enough so we retire to the Member’s Room where Gill has a simple salad and buys me a coffee and a slice of lemon tart.  She sheepishly has to admit that despite having had a draft copy of my artworld memoirs for the past six months she’s only managed to read a dozen pages which at that rate will mean it’ll take her five years to finish the thing.

Gill heads home while I carry on to Cork Street which is looking more chaotic than ever as the demolition and reconstruction continues its lengthy disruption.  In fact, it seems to be starting to resemble one of those Auerbach paintings.  Call in at the Angela Flowers Gallery for a curious exhibition of Derek Boshier collages from the 1960s.  Boshier is one of those artists who features in all the swinging London Pop Art books along with Peter Blake and David Hockney but who then seems to disappear off the radar and I can’t recall ever seeing an exhibition of his work.  The Flowers show is interesting enough, typical Pop collages of groovy people and from the 1970s but what, I wonder has he been doing these past forty years?

Also call into the Fleming Collection with its display of assorted works from the Aberdeen Art Gallery which is currently closed for renovations.  A worthy if dull collection of portraits by unfamiliar Scottish artists.

*Like Auerbach, quite a few of the greatest British artists turn out to have been immigrants of one sort or another – Sickert was born in Munich, Bacon in Dublin, Freud in Berlin and Epstein in New York.