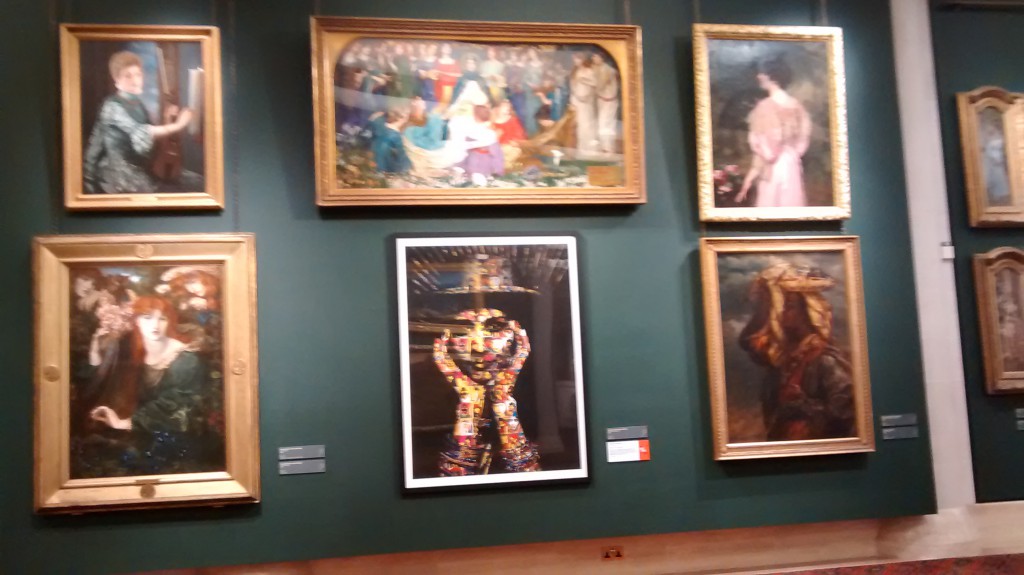 Go to the Delfina Foundation Gallery round the back of Victoria to see Then for Now, the fundraising exhibition of works donated by old alumni and curated by Sacha Craddock and Chantal Joffe.  The exhibition is a bit of a mixed up mishmash and not really very coherent but, as the neat little catalogue explain, the point of this particular show is, quite reasonably, to blow its own foundational trumpet and let us know how many successful artists the charity has helped by providing free studio space.  Included in the show are works by  Mark Wallinger, the Wilson twins, Tacita Dean and Anya Gallaccio but the piece I liked best is a neat little piece of conceptualistic wit by Anna Barriball that consist of the stubs of burned out candles that prettily symbolise time’s inexorable progress.

Head out West to Turnham Green and have a look in the Oxfam bookshop just outside the tube station which has a small but always interesting selection of secondhand art books to browse through. Then on to the high street and Fosters which also has a very good second-hand/antiquarian art section.  Flicking through art books is one of my favourite hobbies and especially enjoyable when it’s free – when, like today, there’s nothing that is so tempting that it has to be bought.

Back to the tube but stop at Zecca, a shop that specialises in selling pretty ceramic bowls, decorative corkscrews, tea-towels, whatnots and other luxury essentials to the well-heeled ladies who lunch in Chiswick and surrounding areas.  It’s run by my old friend Pat so stop off to have a quick chat with her and try to get her interested in the fabric cat sculptures that my sister has started making by the dozen.  No deal – they’re just not utilitarian enough, which is a fair point.

Back into town and the Guildhall Art Gallery for No Colour Bar which features paintings and sculptures from some of the key figures from the Black Britsh art scene of the 1980s including Keith Piper, Lubaina Himid, Eddie Chambers, Tam Joseph and Sonia Boyce.  The work still looks as powerful as it always did but the main reason I’ve called in is to check that they’re still displaying Chila Burman’s Auto-portrait (which they are).  I bought a version of this print a couple of years ago which I offered to donate to the National Portrait Gallery.  They declined – well, I suppose they thought they already had enough portriats of important black artists in their collection already.  Anyway, I thought I’d write to them and suggest they visit this exhibition and maybe prompt a rethink.

On to Offer Watermans for three floors of early Hockney drawings and it’s so pleasant to be reminded just how sweet a draughtsman Blondie was all those years ago when he was a young rake adventuring out into the artworld.  The line drawings of Henry Geldzahler, Celia Birtwell, WH Auden* and various friends and lovers are hugely attractive and give the lie to those who used to fashionably sneer at Hockney for having a problem drawing hands.  And, of course, they’re all so much more beautifully composed and executed than the deadly dull landscapes that he’s been turning out recently.

Stop off at a Pret for a quick calorific infusion by way of a chocolate mousse and a fizzy elderflower cola and then on to Somerset House for Out of Chaos, an exhibition celebrating the centenary of the famous Ben Uri Collection.  Alongside Soutine, Auerbach and Epstein the best work in this display is the early Bomberg drawing Racehorses which exemplifies that brief moment when British artists started to embrace Modernism before the first world war came along and put everything on hold.  It’s also nice to see Mark Gertler’s Merry-Go-Round, on loan from the Tate (it was formerly owned by the Ben Uri organization but sold to raise funds).  Finally, there’s a slick video promo with Nicholas Serota, Sandy Nairne and Diane Abbott all praising the organisation and supporting its ongoing campaign to find a suitable permanent gallery space in central London.

To London Bridge and a quick walk round the Hay’s Galleria shopping mall which has a great view of the river and all the new architectural monstrosities that have recently appeared.  Have a well-deserved g&t in the Horniman pub, meet up with Kay and walk down Bermondsey Road, past the White Cube and on to the grand opening of Project Space.  Met at the door by the publisher, writer, cultural commentator and this evening’s soi disant charge d’affaires, my old friend Mike von Joel.  He greets me with some witty jibe about my shabby sartorial style.  But, fortunately, I have a zinger riposte and say that I use the same tailor as Bryan Ferry…(pause for comedic effect)…Marks & Spencer’s.   Of course, the humour of the line relies on the audience being able to recall that Mr Roxy Music, the icon of cool good taste, once appeared in an advert for M&S.  Unfortunately, I mess up my delivery a bit by not getting the name right and go through a list of Bryan Fury, Faure, Fiery, Furry before finally getting to Ferry.  And, by this time, MVJ has been summoned by some siren with a very attractive face-lifted face…’Mikey, let me introduce you to…’ Understandably, he turns on his heels and off he goes.

Kay and I manage to get a cold beer and checkout the three floors of art but it’s all a bit too Post-Modern with too much Paul McCarthy style ugliness to be of much interest to old Modernists like us so we don’t stay very long.

*It’s probably apocryphal but Hockney, having spent all morning recording each line and crevice etched onto the ageing poet’s crumpled visage is meant to have said: If you think Auden’s face is wrinkly, just think what his balls must look like.