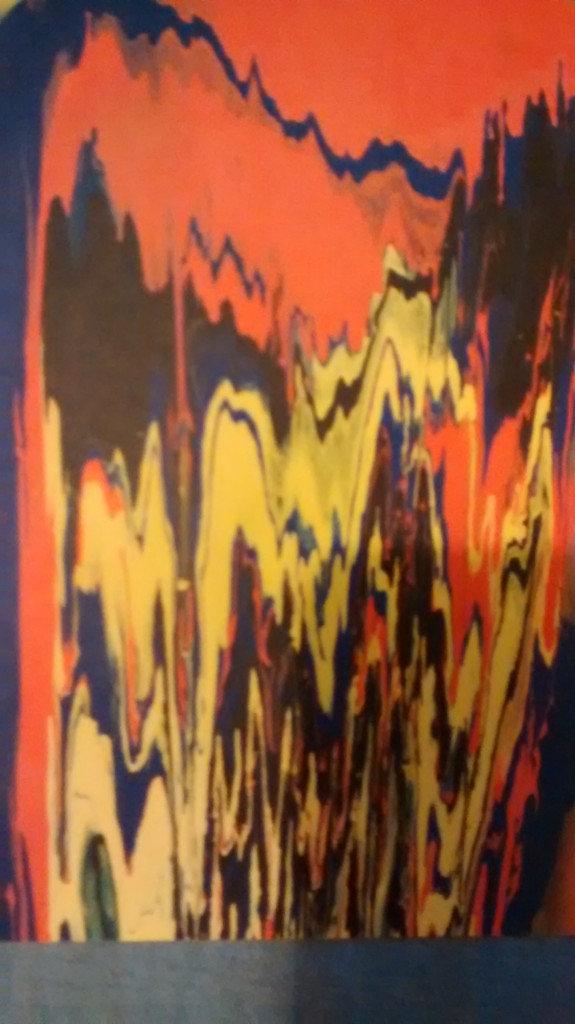 Get a really enthusiastic email from Stefan saying how he’s just started reading my artworld memoir and thinks it’s terrific.  Feel pleased, surprised and also a bit embarrassed as I can’t help remembering that years ago, when he asked me to write a review about his book on Performance Art, I bashed out a real snarky diatribe saying it was all junk.  It might have been true but was a bit unhelpful of me to say so at the time.  The gist of what I wrote was that Performance Art was to be avoided as it was always either boring, scary or embarrassing – you know the kind of thing…someone sits on a chair with his feet in a bowl of custard reciting Ulysses backwards for ten bum-numbing hours or starts waving knives around and tries to set fire to the gallery or, when all else fails to get a reaction, drops his trousers and start waving his dangly bits at you.

Start the day at Old Street tube station and amazingly manage to find the right exit first time to take the short walk to Modern Art in Helmet Road, a little gallery that prides itself on its dedicated promotion of Post-Modernism.  At least, that’s how it usually looks

to me and this time is no exception.  Mark Flood, of whom I’ve never heard, produces what look to me like pixilated versions of Rothko paintings – and when I check the press release I find I’m right – that’s what he thinks he’s doing, too.  So I feel quite clever that I got the little PoMo art joke but the paintings still look a bit insipid and I can’t help wondering what the point of making them was.

Because the gallery is such an up-to-date, avant garde sort of a place, I ask the woman behind the desk, who surely must have her finger on the zeitgeist, whether she can recommend any art blogs so that I too can keep up with the contemporary.  She looks at me as if I’m daft and says, ‘No, there aren’t any.’  When I say that maybe I should start writing one she looks at my gray hair and M&S threads and can barely suppress the urge to burst out laughing.  I say that it’ll be a Victor Meldrew style critique of art and artworld practices but I don’t think she gets the cultural reference.  Maybe she thinks Meldrew was the mate of Althusser and Baudrillard that she never quite got around to start reading.  But the more I think about it, the idea of recording the penetrating thoughts of a grumpy old man struggling through today’s artland could be a winner…an almost Michael Winner… I think I may have found a niche in the market.

Get a bus heading south and notice that I’m near Rivington Street so get off and call into the Iniva Gallery for another Autograph photography exhibition, Syd Shelton – Rock Against Racism.  These evocative photos from the ‘70s and ‘80s include pictures taken at the famous concert in Victoria Park – at which I’m proud to say I was present, although I can’t remember anything about it, other than having to queue for ages to get a drink.  I don’t manage to spot myself in the crowd.  Have a quick flick through the accompanying book but it doesn’t seem to mention Eric Clapton or David Bowie as having inspired the movement.  I seem to remember that it was Clapton saying he supported Enoch Powell and then Bowie’s comments that what Britain needed was a benevolent dictator to sort the country out, that prompted the left wing reaction that led to the formation of RAR.

Manage to get to Bethnall Green Road and after a bit of a struggle find the Tea Building which houses Hales Gallery and its current display of Frank Bowling’s drip paintings which I suppose chronologically fall between those of Morris Louis and Ian Davenport.  Can’t say I think that any of them managed to make random drips of paint look anything more interesting than random drips of paint.  Have a look through a catalogue of Bowling’s work and realise that I must have been confusing him with someone else as don’t recognize the style of any of the paintings and they certainly don’t look as interesting as I always thought they were.

Tube off to London Bridge and emerge desperate for a pee so head to Pret on Tooley Street but annoying discover that it’s one of those toilets which need a keypad code to get into and there’s too big a queue of people getting drinks that I don’t have time to wait to clear.  Luckily there’s a Café Nero a bit further along so find relief there without requiring passwords and key codes.  Get a coffee and try out the new strawberry muffin

which comes complete with a sugary pink goo inserted into the centre – incredible what these food technicians come up with although in future I think I’ll stick with the usual raspberry and white chocolate.

Back down the Bermondsey Road this time to have a look at the Picasso prints in the Eames Gallery.  All very attractive and, because they’re not signed and dated, all relatively cheap to buy.  Best of all is the portrait of Picasso wearing a warrior mask – you can still tell it’s him by the familiar bald head and paunch.  As always, he’s standing there ogling a beautiful nude muse.  Decide to have another look at the Project Space – this time without the private view crowd getting in the way of the art.  Sadly, most of the paintings and sculptures still looks pretty awful and as I explain this to Mike van Joel he directs me to one of the co-curators, the bearded hipster Simon Rumney, who listens to my lengthy critique, telling him that his selection is rubbish, with commendable patience and politeness.  I’m impressed and if this is what all hipsters are like then I think I may start to grow my beard a bit longer in support.

Finally more tube rides to get to Vauxhall and just manage the walk to Newport Street and enter Damian Hirst’s new gallery before the rain starts to descend.  What’s the space like?  Well, it’s another great big soulless, dispiriting, antiseptic, aircraft hangar warehouse building of the type made popular by the uxorious art dealer Charles Saatchi.  Thirty years ago, an audience used to comfortable Cork Street sized galleries found the Saatchi supersize scale exciting and revolutionary but I don’t think it impresses anyone much these days and it would have been so much more interesting and adventurous had Hirst not tried to emulate his mentors and instead come up with something more intimate and considered.

The downside of having a warehouse sized gallery is apparent with the inaugural exhibition of John Hoyland paintings which are just not strong enough to fill the space.  It’s not Hoyland’s fault, after all, he was painting them to fill a space like Waddingtons where there size and colour would have been impressive – here they look lost.  They also all look remarkably similar as if Hirst again has copied his elders and gone on a bulk buying spree instead of carefully assembling a proper collection by buying the artist’s work over a period of time.  Oh well, it’s the curse of having too much money and not enough taste.  Let’s hope the next show will be better.

An alternative theory might be that the gallerist is deliberately trying to make the artist look small, in revenge for the time they first met back in the ‘90s when Hoyland had a drink with Hirst, found him ‘loud and obnoxious’ and threatened to throw him over the bar.  Although the exhibition catalogue contains the transcription of a boringly polite conversation between the two of them so I guess that, sometime before Hoyland popped his clogs, they must have kissed and made up.