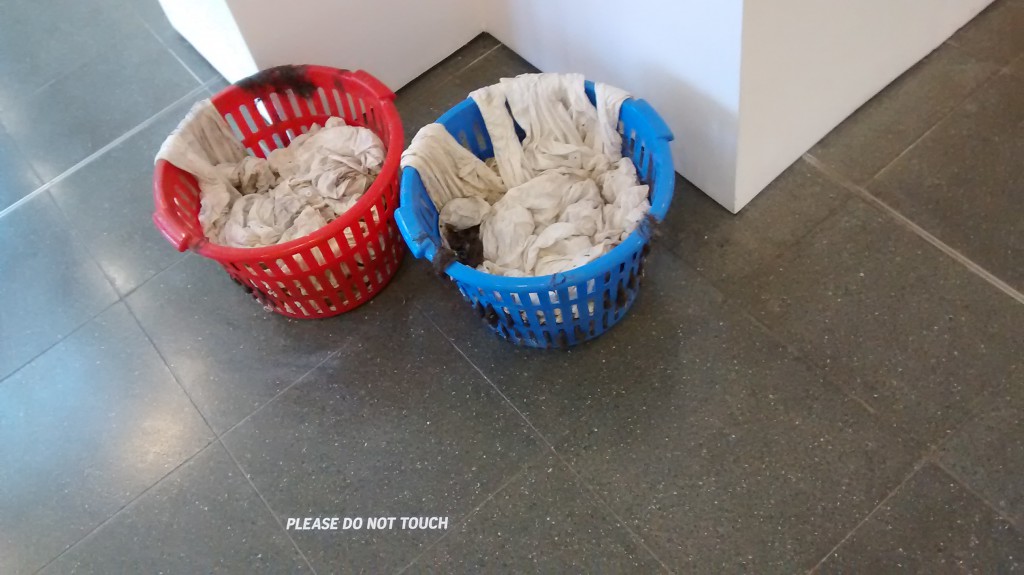 Had planned to go to the Frieze Art Fair today but, after dithering around for the past couple of weeks about whether it was really worth paying £50 to attend – and then deciding I might as well, when I finally got to website yesterday to book a ticket I discover it’s completely sold out! Incredible.  But at least that means I’ve saved a pair of ponies, as cockneys like me and Guy Ritchie like to say.

Decide instead to get a tube to Lancaster Gate and walk through the park to Zaha Hadid’s Serpentine Gallery 2.0.  Once again it’s a show by one of those artists that the gallery claims is a famous rising star with a growing international reputation, but of whom I’ve never heard.  First impression on entering the exhibition is that someone’s bought a bright blue shiny new carpet but got the measurements wrong as it’s not wide enough to fit the space.  So, is it decoration or artwork?  Is one meant to walk on it or walk round it and just look at it.  After completing a couple of circuits and then reading the wall panel explanation, I think this may be a red herring decoy and that the actual art is in the two middle rooms where the videos are playing.  I confess that Video Art is not really my thing. I follow an updated variant of Michael Ignatief’s 2-minute culture dictum which states that this is the amount of time an artist can reasonably expect any member of the audience to sit and watch before deciding whether to stay on or not.  Sad to say Rachel Rose’s Palisades fail the test and I’m ready to switch channels and look for some other programme where someone bakes a cake or dances of tango or…well, I’m sure you get the idea.  The visuals are ok, they’re not unpleasant but just a bit ordinary and uninteresting and remind me of all those adverts you get these days for Guinness or different brands of perfume where there’s a sort of silly little surreal story.  But whereas the commercials end with a punchline telling you the product name and fashion house…Snuggle by Grenouille, Pretension by Herrisson, Plunger by Crapaud…I can tell that the art videos here are going to drag on for far longer than my attention span and they won’t end in a beer or a pretty smell, so I head for the shop and don’t get to see the closing credits.  Mooching around in the shop and there’s another video playing and it’s hard to avoid the incessant West Coast drawl which seems to be that of the artist going into great length to explain what her art is all about which considering the actual art is playing next door seems a bit tautological to me.

Take the short walk across the lake to the original Serpentine Gallery and this time it’s not a bright young thing with a growing international reputation but a gray-haired old man with a solid international reputation, not that I’ve heard of him either.  How can I possibly be so ill-informed?  Presumably I’m not being invited to the right dinner parties or reading the right magazines.  Anyway, Jimmie Durham seems to be a sort of cross between Richard Tuttle and Martin Kippenberger which means he assembles random assortments of nothing very much to create sculptural assemblages which also aren’t very interesting to look at: the highlight being a couple of plastic bins filled with piles of his old underwear.  The most eye-catching thing in the gallery, at least when I was there, was the startling pair of raspberry and crimson, leopard skin patterned trousers worn by one of the visitors –  definitely neither M&S nor Bryan Furry.

After a quick look round the bookshop (that big red Anish Kapoor book by Phaidon is now reduced from £70 to £30! a bargain) I walk out into the park and down Exhibition Road and notice a flyer for Pleasure & Pain, the Victoria & Albert Museum’s exhibition about extreme footwear.  It seems to be sponsored by Clarks, a pair of whose solid shoes, within which, I am currently shod, suggesting to me that this very untrendy brand must have recently employed a new marketing manager who thinks he’s going to spark up the name by associating it with the movers and groovers of the artscene.  Some chance.  Maybe he should try and get Bryan to wear a pair or maybe I could asl them if they would consider sponsoring me.

To South Kensington and Christies for Multiplied, their annual fair devoted to the art that comes in editions.  It seems a bit bland to me this year.  The Peter Blakes from Dark Matter Studios are cute but nothing else sticks in mind except the punk prints on display at the John Marchant stall.  Most of these are by Jamie Reid, the graphic designer who produced all that cut-up blackmail-note lettering that helped make the Sex Pistols famous.  I have a quick chat with the eponymous gallery owner who I met at the ICA a few months ago when he was researching his forthcoming book on Reid.  He interviewed me about the time Reid showed at Brixton Art Gallery, when I was helping to run the place.  It’s fair to say that Reid was an archetypal punk anarchist at the time, which meant that when the show was over he simply removed the thirty feet of gallery wall panels on which he’d stuck his collage of memorabilia and drove off with them, never to be seen again.  As I recall, his parting words were something about helping to replace the wall he’d just removed which, of course, he never did.  The moral of the story is never to trust a punk anarchist.  As for the very charming and very unpunk Mr Marchant, it turns out that he’s been busy recently and regrettably hasn’t yet managed to finish reading the copy of my artworld memoirs that I forced on him when we last met.  In fact, technically speaking, he hasn’t actually started reading them at all.  But, as he assures me, the most important thing is that he hasn’t lost them, he knows exactly where they are – secure on his bedside table.  Cold comfort.

Take a tube across town to Aldgate East and the Whitechapel Art Gallery where the Palestinian artist Emily Jacir is having her big one-woman show Olympia – and I don’t care if she is another rising star with growing international reputation, I’ve still never heard of her.  The gallery is full of what might be called installations, the first of which is devoted to a sort of documentary tribute of photographs, paper cuttings and ephemera associated with Wael Zwaiter, a writer apparently assassinated by Israeli intelligence agents from Mossad.  I suppose if the display was sited anywhere other than an art gallery I’d describe it as a sort of documentary homage and, if in analytic mode, would start thinking about it within a political, propagandist context.  But seeing it sited in an art gallery I’m stuck with a question that I really thought had been resolved almost a century ago – is it art?  In normal circumstances I’d be arguing that everything placed in a gallery is art by definition but with this I’m not so sure.  And then, if it is art then is it good art – by what criteria should one judge it?  If you start thinking about it in terms of the accuracy and impartiality of the story, then this is judging it in purely documentary terms, which doesn’t seem quite right.  But it seems even more inappropriate to start thinking about it in purely traditional aesthetic terms – the layout of particular objects in their glass cases, the presentation of the video and other wall pieces.  Maybe this conundrum is the art but I don’t really think so.  Other pieces in the exhibition are equally intriguing, questionable, problematic but the conviction of the artist is unquestionable so in those terms it’s definitely a show that’s worth taking a look at and considering one’s reactions.

The most straightforward individual work is a good old fashioned piece of Conceptualism:  a sequence of photographs of Currency Exchange booths and little paper receipts that record the artist changing money from one currency to another and back again until the transaction costs whittle the original amount down to a few coins.  The idea is simple in itself but resonates with all sorts of ideas on capitalism, money-changing, the potential Tobin tax and other topical considerations.

Take the tube back to Embankment and have a walk down Charing Cross Road and window shop the second hand bookshops.  Have a look in Koenigs and then on to Greek Street where I’m expecting to see an exhibition by the Bo Lee Gallery but when I get to the address it seems to be a hospital and not an art gallery I can’t see a sign about art show.  I’m reluctant to go in and ask in case I’ve got the wrong place or the wrong dates and I’ll be accused of going to A&E without good cause.  Discretion seems the better part of valour so instead find a branch of Eat and claim my free coffee.  I completed one of their email questionnaires and this is my reward.  I also get the very last muffin in the shop – chocolate – and somehow enter into a long conversation with the barista about the dangers of having soya milk with decaff coffee which, apparently, can be highly dangerous, although I can’t quite figure out why.  Fortunately, I always go for normal milk so I think I’ll be alright.

As I’m eating the muffin I suddenly remember that I was feeling so dispirited by Serpentine show that I forgot to take a look at the pavilion – the temporary annual construction they put up outside the permanent gallery. Drat – will have to go back another day and check it out.