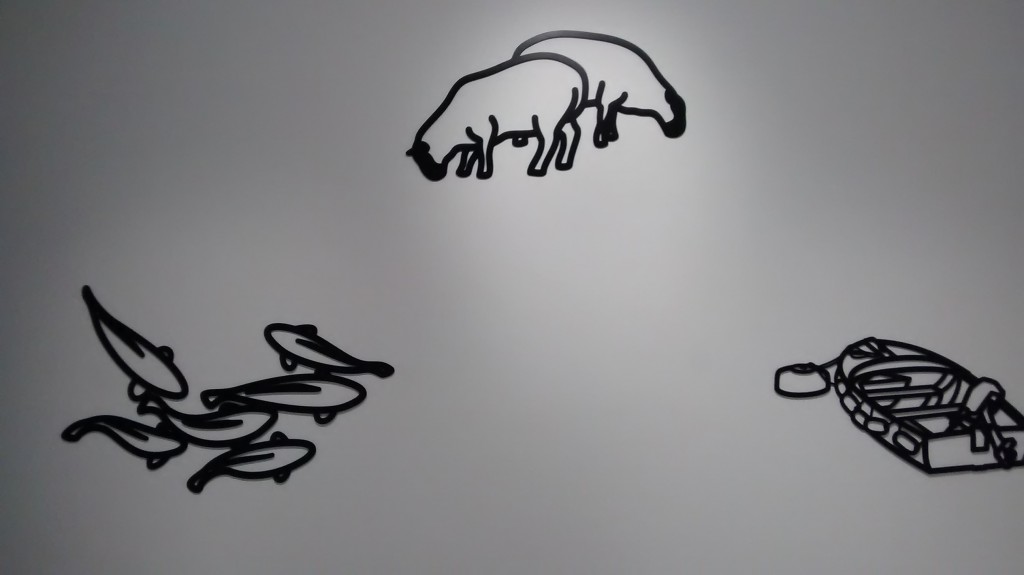 Up the grandiose stone steps, through the imposing sets of columns and under the architrave to get to the tiny Royal Academy Shop*, situated in the foyer of the Pace Gallery.  Parturient montes, nascetur ridiculus mus – not precisely the right bit of Latin but it’s the best I can do, if you’ll pardon my Horace.  Am feeling a bit Latinate today having just got around to reading the very favourable Observer review of my old friend Mary Beard’s latest tome, SPQR: A History of Ancent Rome.  Old friend in the sense that we were mates some decades ago when we both lived in Cambridge:  she the ambitious, hardworking student and me the lackadaisical, unemployed, layabout artist.  The last time we bumped into each other was at Tate Modern ten years ago, although we have exchanged emails more recently when I asked her if it was ok to put a photo of her in my artworld memoirs.  The picture in question being a flattering portrait that I painted of her all those years ago. Happy days.

Anyway, back to the little RA Shop and a couple of potential presents stand out:  the leather, aquamarine-coloured wallet with a Michael Craig-Martin design (£50) and the digital watch with plain white cardboard strap that you’re meant to decorate yourself (£10).  As for the Pace Gallery, this has a groovy little café and while it’s too early for my morning infusion, I do avail myself of the elegant plumbing facilities.  As for the art, well works from the ‘70s by Lee Ufan are ok-ish if you’re into Korean Minimalism.  But it’s a wee bit arcane and the random thickets of entangled gray lines and the blue blobs, that look like the potato prints we made in primary school, are not quite cool enough for me.  I like my Minimalism arctic cold and these strike me as being just a little bit lukewarm.  Up the grand marble staircase and Brent Wadden’s heavy abstract textile artworks are framed and hung on the walls.  Pretty enough but I can’t help thinking they might look better deframestrated and laid on the floor as rugs.  They remind me a bit of my own, late-period abstract collages made from carpet off-cuts, one of which I entered for the Whitechapel Open Exhibition back in the ‘80s only to have it rejected – the final straw that made me decide to give up making art

Walk up Cork Street to the ever-reliable Alan Cristea Gallery which has a simple mixed exhibition but displayed with typical stylish panache.  There are some very attractive Michael Craig Martin prints of umbrellas, headphones, a bag of chips – his usual set of props – in editions of 20 at £900 unframed which seems a good price to me.  Then, rising in expense, are some Julian Opie metal wall pieces, Richard Serra works on paper and – very topical this – Edmund de Waal ceramics (porcelain, of course) that resemble real life Morandis.

Down to the Cristea corner gallery and One Day this Glass will Break, a display of Cornelia Parker photogravure etchings.  I was looking forward to seeing these, as I’m a bit of a fan of her work, but have to admit I was disappointed with the show.  The pictures all seem a bit samey, a bit underwhelming and, as far as I can tell, they’re straightforward reproductions of household objects – tankards, tureens, jugs – and lack any of the neat little Surreal Conceptual twists that usually make Parker’s a bit special and stand out from the rest of the pack

Heading up New Bond Street so take the time to rummage around the Fine Art Society gallery.  On the groundfloor there’s a selection of classic photos by Cartier-Bresson.  Some, like the man jumping over puddle, the Belgians peeking through a whole in the wall and the surly looking Mexican prostitutes, very familiar and others, the portraits of Giacometti, Camus and Marilyn Monroe, less so but all still wonderful.  Downstairs Performance & Remnant is another pretty good mixed show.  Apparently the theme that links the nine artists is that they all incorporate poetry, dance or theatre in their practice.  I’m not sure that I would have guessed that if I hadn’t glanced at the press release – and am not really sure it matters very much – but I quite liked Rashaad Newsome’s glossy, sensual collages and Andy Goldsworthy’s photographs that capture a filament of some sort thrown in the air and mirrored by its crystal sharp shadow on the desert floor below.

On to Blain Southern and Moving Stillness, an early work from the grand old man of Video Art, Bill Viola.  Basically we get a screen showing Mount Rainier which is not, as one might think, situated in Monaco but is, in fact, the highest peak in the state of Washington.  The image is a bit fuzzy and those of us from an analogue age might be tempted to look for an aerial to move around or some dials to twist.  Resist the urge, do not adjust your set, the image is meant to be wobbly, although given long enough apparently it does settle down (only then to be made shakey again).  The point of the exercise is, apparently to offer a ‘rare moment for mindful focus’.  Well we could all use one of those but when I paid my visit, it wasn’t to be.  There was already a young couple sat in the gallery and although I couldn’t see them – the room was pitch black – I could hear them whispering lines from Brief Encounters or maybe playing a game of night-goggles Scrabble.

Either way, I knew I wasn’t going to get no mindful focus so I gave up and headed downstairs for some more early Asian Minimalism, this time courtesy of Kishio Suga.  Now, I may be a bit of an old timer but I’m still fairly steady on my feet; nevertheless, while I’m holding on to the rail and making my descent, a woman runs into the gallery, races down the stairs, looks round the exhibition, and comes back up all before I’ve managed to get to base camp.  I thought I was pretty fast going round exhibitions but this female Billy Whizz Wonderwoman makes me look like a right amateur.  Her high-speed critique doesn’t bode well for the exhibition and while I agree that the large stone and wood sculpture is a bit weak, the simple paper and pencil geometrical designs warrant at least a brief courtesy pause for contemplation.

Keep heading north and cross over into Regent Street and round the corner to Tiwani Contemporary, which specialises in contemporary art from Africa.  Constellations is the first solo show in Britain from the London-born Ethiopian artist Theo Eshetu.  The press release calls him ‘one of the most influential media practitioners of the contemporary era…known for his pioneering work across film, television and video’ which may be just a little bit hyperbolic.  The five-screen video installation Meditation Light seems to be a bit of Ethiopian travelogue but keeps me in my seat on the bench for a little while longer than the statutory two minutes and not just because my feet needed the rest.  And Mirror-Ball Constellation, which collages together snaps from the Berlin Ethnological Museum and then presents them in a sort of multi-image, kaleidoscope collage, is as divertingly sparkly as its title suggests.

Finally to the Photographers’ Gallery.  I ask the man on the door whether it’s worth paying the £3 entrance fee.  He pauses for a while before answering in the affirmative and, since he’s got an honest face, I give him the cash and head up the stairs.  There’s a stream of young students exiting the galleries and chattering away excitedly but I’m not sure that they’ve been giving their full attention to the display as the exhibition, which comprises a dozen different sections, is unremittingly, unrelentingly, morbidly grim.  Which, I hasten to add, is not meant as a criticism, the show is supposed to be that way.  Burden of Proof:  The Construction of Visual Evidence looks at the way photography has been used over the years to provide evidence of various crimes of violence from simple suburban murder through the random aerial bombardment of civilians all the way up to Soviet era genocide.  The displays are fascinating and give an intriguing insight into the development of forensic photography but, by their very nature, are also a hugely depressing testament to the consistency of human inhumanity.  It’s not really an exhibition that I feel like lingering over so instead I make for the café and try to forget the cruelty so dutifully encapsulated within the images I’ve just seen by treating myself to an apricot danish shaped in the form of a starfish.

*Of course, there’s a much bigger shop, round the corner in Burlington House where the main Royal Academy galleries are..