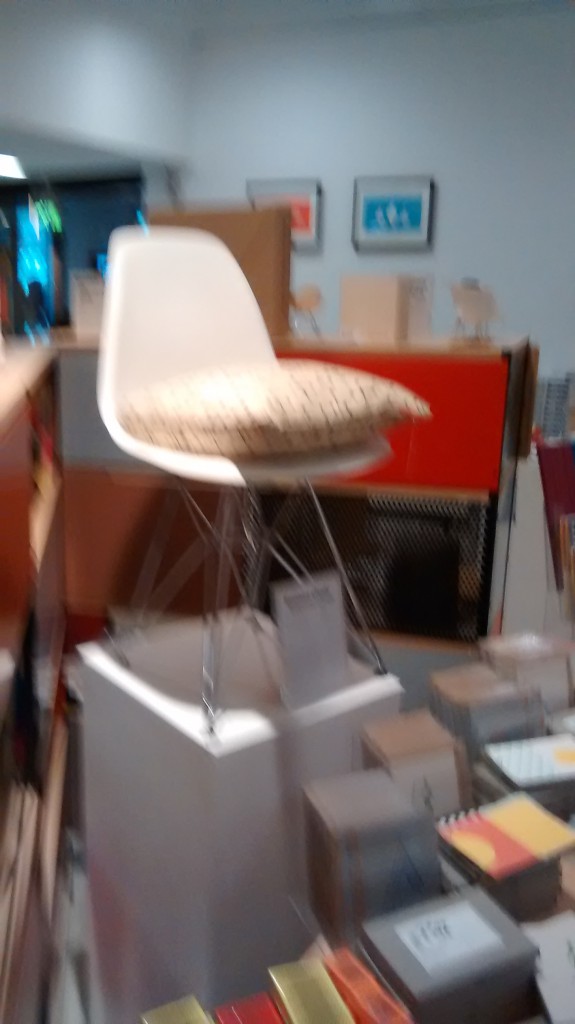 If I was playing Trivial Pursuits or taking part in a pub quiz and there was a question about influential American designers of the 1960s and ‘70s then, with a bit of effort, I reckon I’d probably be able to dredge up the name Eames from somewhere down the back of my subconscious.  As for supplementary questions; well I’m pretty sure they made plastic chairs and also that metal zig-zag coat rack with the different coloured wooden spheres, that you find in every trendy design shop.

That being pretty much the sum total of my knowledge about Eames, I thought it would be useful to go along to the Barbican’s new exhibition the World of Charles and Ray Eames and find out more.  Well, now that I’ve seen the show and looked at dozens of photographs, films and video clips and read tons of labels, captions and wall panels I have to confess that I don’t know very much more than when I was back scratching my head at the pub quiz.

I was right about the chairs:  they definitely designed a load of them, and there are many familiar examples on display here – made out of moulded plywood and polyester plastic – for use at home of the office.  Also on display is their famously ugly ottoman style recliner, the one with all the plumped up leather padding and silly separate footrest.  But there don’t appear to be many other actual products that the Eames designed.  It seems that they went onto designing educational exhibitions for American museums and the Barbican dutifully has little displays of some of these – on subjects ranging from the joys of mathematics to the life of Benjamin Franklin.  But as for the rest of the show, it seems to be source book material rather than what the source actually led to, so there are lots of picture collages of random evocative things – animal masks, people’s heads, trees, birds, traffic, men with crew cuts – anything and everything that is designed to spark …designed to inspire…designed to stimulate…designed to something.  But if all this design-think resulted in any actual products then the exhibition doesn’t seem to want to show us.  Incidentally, the same thing happens if you search for Eames in Google images – you come up with a gazillion pictures of their chairs but very little else.

Two films that come from the Eames design lab stick in the mind, though what they were actually made for I’m not really sure.  One neat little concept concerns itself with size and starts with a man having a picnic in Chicago.  Apparently he’s under surveillance from god’s great microscope which gradually pulls back to show Illinois, continental North America, the globe, the solar system, the milky way and the outer reaches of the universe.  The process then reverses so we get to see the man’s hand then his skin cells, DNA, atoms, protons and quarks.  The other film is a bit less scientific and shows a young American couple who are all dressed up as if going out for an evening at the theatre but have decided instead to get out their allen keys and assemble the sofa they’ve just bought.  They put it together without a hitch and on completion the woman strokes the fabric covering with such loving tenderness that she positively purrs with the kind of satisfaction that usually require batteries to achieve.  I’m not sure you get that with Ikea.

Down at the Barbican’s Curve Gallery, Eddie Peakes’ Forever Loop promises ‘an erotically charged spectacle that destabilizes the boundaries between high and low culture’.  Well, there’s a sculpture of a man with an erection the size and shape of a billiard cue, which is impressive but impractical, and when I visited there were a pair of young ladies stood around without any clothes on.  I think if I’d waited longer they were going to rollerskate round the space but I confess I just felt a bit embarrassed loitering around waiting for them to make their move – I suppose it was just my boundaries being destabilized.  Anyway, if that was the low culture then you can walk up some stairs and wander along a metal walkway which, I assume, provides the artist’s idea of high culture.

Back to the real world and walk down Clerkenwell Road, which seems to be packed with furniture design shops full of designed furniture straight from the world of the Eames.  I’m tempted to go in and stroke some of the sofas but decide otherwise and walking on happen across a somewhat more parochial and pleasant little display of works from the Kingston Artists Open Studios at Craft Central.  Have a chat with the artist invigilators:  Lizzie Brewer who makes pretty little sculptures with twists of wire that cling to the wall and carbon fibres that are frozen into acrylic blocks; and her colleague who makes subtle little abstracts and to whom I must apologise for not making a note of her name.

Onwards to Farringdon and the Eagle Gallery where Graeme Todd is exhibiting a series of mixed media abstracts that look to me like sort of psychogeographical ordnance survey maps and with titles like The View from Nowhere, and the Hare Hunt I think I may be right, although Grips sounds a bit medicogeographical.  Have a long gossipy chat with Emma who runs the gallery.  Our wide-ranging discussion starts with a moan about the vicissitudes of varifocals – my new pair make the paintings go in and out of focus which I’m not sure helps them look better or not.  Then we move on to the threat posed by Chinese students walking down Caledonian Road not looking where they’re going as they’re too busy gazing into their ipads; the macho characteristics and boorish behavior of some British Abstract Expressionist; and the good old days when the galleries of Annely Juda and Angela Flowers were situated next door to each other in Tottenham Mews; and other vital topics of the day.

Emma’s best story though is about a friend of hers visiting a mixed exhibition at Waddington’s and noticing that a layer of dust has accumulated on one of those famous Donald Judd metal cubes – and upon which someone had written ‘clean me’.  The gallery assistant having been made aware of the situation could then be overheard telephoning the back office requesting someone find her a duster and, sotto voce, asking which of the sculptures on display was the Judd.  I suppose a better punchline might have been if the assistant had asked for confirmation from the boss whether the writing was part of the artwork or not before daring to wipe it off.

A quick call into Hollybush Gardens for Falke Pisano’s The Value in Mathematics which is a sort of installation comprising models made of wood and string and suggestive of the detritus remaining from a particularly obscure scientific lecture.  And one I don’t think I would have understood had I been present.

Finally to the Gagosian Gallery for some delicious comfort food for the eyes in the form of large graphic paintings of home and studio interiors by Jonas Wood.  According to the press release these paintings fuse the influences of Bonnard, Matisse and Hockney.  I’m not so sure about Bonnard but two out of three isn’t bad.

Go for a coffee at Patisserie Valerie on Kings Cross station but there are no tables free so try Costa on Euston Road but they seem to be short staffed and I get bored waiting.  Struggle on to the Starbucks opposite the British Library and the coffee is the usual reliably bland, but not altogether unpleasant, brew, but I should have stuck with the muffins.  Instead, I foolishly decide to experiment, seduced by the enticing appearance of a chocolate swirl.  Big mistake. The pastry seems to be make of kryptonite cardboard and the plastic fork, that the perky young American barista has kindly given me, is not up to the job and frankly neither are my teeth.  It’s so hard going that, half-way through, I’m forced to abandon my attempt to eat this thing.