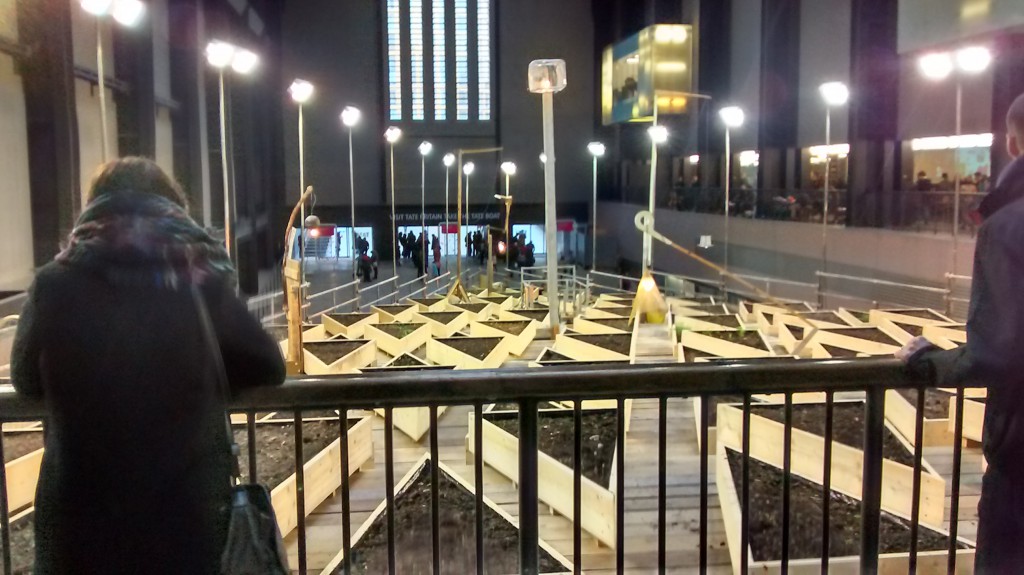 Tired of the tango and fed up with fandango, I decide to follow the steps of my style guru and sartorial cynosure Bryan Furry and Do the Strand.  Well, metaphorically speaking…I don’t actually dance down the road but saunter along it to get to Somerset House and the Courtauld Gallery.  This place not only has the country’s best permanent displays of early European Modern Art (from the Impressionism to Surrealism) but, for the past few years, they’ve also consistently been showing the most interesting, intelligent and well-curated temporary exhibitions anywhere in London.  The current ones are no exception.

It’s culturally criminal, I know, but unfortunately I’m in a bit of a rush, so I’m going to bypass the marvelous permanent collection to get straight to the special exhibitions.  So, up the steep staircase right to the top – two steps at a time, pilates-style – which I’m sure does me good but leaves me dizzy and needing to sit on a bench to get my breath back.  And the first thing that greets my eyes, when they’re back and able to focus, is one of those Bridget Riley paintings composed of thin rows of alternating red and green lines.  It’s the kind of Op Art optical illusion deliberately designed to make one feel queasy – and, in my current state, it succeeds admirably.  This is part of the little Bridget Riley: Learning from Seurat exhibition which aims to show connections and resonances between the two great artists, taking as its starting off point Riley’s early attempt at copying Seurat’s Bridge at Courevoie.  Both original and reproduction are on display, and it’s curious to see just how ham-fisted Riley’s attempt was – she’d certainly never have made it as a professional forger.  So, while the serried ranks of Seurat’s lines of tiny dots manage to correctly coalesce into an attractive landscape with a perfectly accurate perspective, Riley’s crude attempts ultimately remain looking pretty much like simple rows of coloured splodges.  Of course, she tightened up her technique over the years and these early crude blots on the landscape were subsequently successfully refined and ploughed into the abstract furrows that made her career.

It’s all interesting stuff but the main reason I’ve come to come to the Courtauld is to see Soaring Light, a display of paintings by Peter Lanyon.  I’ve seen quite a few individual Lanyon’s over the years but this is the first time that I’ve been able to see a whole bunch of them together and, at first sight, I have to admit they still look very messy and, frankly, hard to like.  Nevertheless, it’s worth giving the artist the benefit of the doubt and taking a closer look, not least because the works have great art historical interest.  Created in the late ‘50s and early ‘60s, the paintings represent some of the earliest British, post-war abstract paintings:  the homegrown response to American Abstract Expressionism which was getting into full flow at this time.  While they were making bigger and bigger pictures that were meant to demand an emotional response from the viewer, inducing feelings of shock and awe, our parochial equivalents were much more reserved and restrained.  I suppose there are various reasons for these different approaches to Abstractionism, the Americans are perhaps more naturally self-confident and exuberant in comparison to we British, renowned for our diffidence and reserve (think of a gesticulating Robert De Niro versus our mumbling Hugh Grant).  Or, if you think those kind of national stereotypes are outdated, maybe causes are related to historical circumstances, with post-war Britain suffering years of austerity while America enjoyed an economic boom.  Then again, perhaps it’s all to do with geography and the contrast between our gentle, verdant, rolling hills and the vastness of their wide open plains.  Whatever the reason, Lanyon’s paintings typify a peculiarly British attempt to relate to the landscape, albeit here in a highly abstracted fashion, that seems to be deliberately designed not to be aesthetically picturesque but uncompromisingly true to the sensibilities and feelings of the artist.

The Courtauld show specifically relates to the series of paintings that Lanyon created as a result of his experiences, learning to glide and then flying solo over the South Coast.  The artist’s aim was to try to capture the experiences he had witnessed, both seeing landscapes from a new, aerial perspective and also evoking the sheer exhilarating thrill and freedom of being able to swoop and dart through the clouds.  As a result, Lanyon doesn’t try to make the pictures artificially balanced or smooth or neat and attractive but simply truthful to the experience.  The results – swirls, blocks and lines of colours that deliberately smear and clash – come across as an almost ferocious reaction against the peaceful green of the typical British Constable countryside.  Although one can perhaps see echoes of some of the more exuberant Turners – think of some of those soapsud sea storm paintings.

How well does Lanyon succeeded in his attempts to reframe the British landscape?  Well, even after a long, second look, the paintings are still too messy and incoherent for my tastes but his attempts to create a new language of landscape painting were heroic and unquestionably impressive in intent.  And, of course, they were ultimately tragic – terminated all to soon – with Lanyon dying in 1964 from injuries received having crashed his glider.

Back on terra firma to continue down the Strand, through Albert Embankment and on to Blackfriars Bridge where I spend ten minutes walking back and forth trying to line up a picture of the Tate Modern tower exactly eclipsing the Shard, save for the top two glassy peaks that should then give an effect of v-sign photo-bombing.  But it starts to rain so I give up the attempt and hurry on instead to the Purdy Hicks gallery where Sue Arrowsmith’s cool restrained watercolours and acrylics come as a refreshing contrast to Lanyon’s emotional chaos.  Whisper from the Shadows is a very impressive series of paintings based on silhouettes of trees, with the carefully delineated thickets of branches and leaves combining to make attractive compositions of abstract patterning.  I’m not sure if this is great art or great design but it’s definitely great interior decoration and would look stunning on the right walls of the right house.

Marcus Campbell’s second-hand art bookshop is just round the corner so call in for a quick look and there’s a really nice chunky old Thames and Hudson book on Man Ray that’s tempting.  Hard to resist.  But I do and instead settle for an al fresco coke in Falcon Point Piazza, scanning through the Guardian and Will Self’s panegyric to the filthy delights of nicotine addiction.  The rain starts up again so scull down the fizzy stuff and dash over to Tate Modern.  I had specifically intended to enter the gallery down the ramp to get the full effect of the new turbine hall commission but, sod that, I’m getting wet, so nip in the nearer, ground floor entrance where the restaurant is.  And it turns out I needn’t have worried as, rather bizarrely, I’m on the right level to see Abraham Cruzvillegas’s depressingly feeble installation.  The artist has simply forgone the opportunity of using the full majestic sweep of the lower floor and instead raised his work up to ground level on a set of rather ugly scaffolding poles.  In fact, I think it’s fair to say that the artist doesn’t quite seem to have understood the concept of making site specific work since his collection of wood boxes filled with earth could have been stuck anywhere – and would have had the same effect:  they’re just very unattractive and very uninteresting.  You’d also get the same message from seeing two or three of them – nothing is added by having dozens of them.  A couple could have been stuck in a corner of the gallery leaving another artist to make better, more considered, use of the very particular, rare vastness of the turbine hall site – surely, that is the whole point of the commission.  The lack of visual interest in these boxes of mud is matched by the very thin conceptual idea that accompanies them:  the earth in the boxes is to be watered and lit and the seeds of any weeds in the soil allowed to germinate.  That’s it – let a thousand small weeds bloom…or not.  At least the title seems apt – Empty Lot.

Cruzvillegas won’t be the first artist to fail to satisfactorily fill the turbine hall – although perhaps he gets the award for the weakest attempt so far.  This particular commission has proved to be something of a poisoned chalice having defeated Richard Tuttle (limp textile sail), Rachel Whiteread (piles of boxes), Doris Salcedo (long floor crack) and Bruce Nauman (whispering soundpiece).  Only Olafur Eliasson (big sun) and Anish Kapoor (jumbo prophylactic) achieved success with Ai Weiwei getting a score draw – health and safety considerations denied the public the opportunity of walking on his ceramic sunflower seeds, which would certainly have been more interesting and involving than just looking at them, and might have been quite fun.