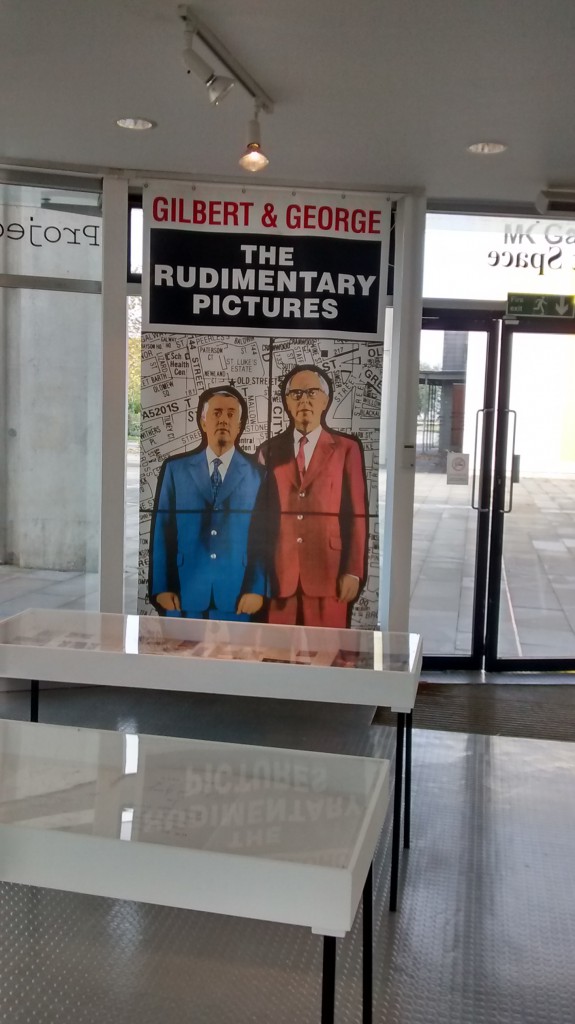 It’s time to take day trip outside of the capital.  Well, one mustn’t be too London-centric.  But where to go?  New York, Paris, Rio de Janeiro, Tierra del Fuego…not today.  How about…Milton Keynes.  Ok, I know it’s not everyone’s first choice but what’s the point of following the rest of the crowd?  Sometimes one should trust one’s own instincts.  I know they’ve got an art gallery there that I’ve never seen and I think maybe now’s the time finally to take a look.

Out into the wilds of Buckinghamshire and by the time I arrive at Milton Keynes railway station I’m feeling a little peckish so, in an attempt to embrace the spirit of adventurous awayday travel, I bravely decide to sample the local cuisine.  Hence my order of an all-day breakfast panini* from the Pumpkin Café – which is not just local but also sort of topical, in a Halloween kind of a sense.  Unfortunately, I seem to get the trick rather than the treat, if you’ll excuse the Americanism.  The styrofoam or cardboard or whatever the pastry bit is meant to be is half cooked – part crunchy and part soggy – and the filling, consisting of a bit of sausage, a bit of bacon and a lot of cheese, is a not very pleasant mixture of textures, devoid of any discernible taste.  And the cappuccino?  Well, at least there were no unpleasant surprises there – that also didn’t taste of anything, so that wasn’t too bad.

Not exactly an auspicious start to the visit and sadly the bad omens continue with the first piece of art I bump into:  a great ugly lump of granite dumped just outside the station concourse.   It seems to have some odd faces crudely carved into it and some small children clambering over it but, at least, there’s no graffiti on it, which says something for the sensibilities of the residents.  I consult my map and the town’s one and only art gallery looks as though it should be easy to find – the station is at one end of Midsummer Boulevard and the gallery is a twenty minute, straight line walk away at the other end.  Milton Keynes is a new town, designed from scratch, so there are special pedestrian walkways separated from the traffic, that runs down this central street, by rows of trees, that make the view a bit more attractive and also quieten the noise.  What else is there to see aside from dozens of parked cars?  The architecture is all pretty mundane – everything seems to be basically constructed of glass boxes made into rectangles of varying shapes and sizes, with little to distinguish between the rows of offices, shops, a couple of hotels and a couple of pubs.  Into Intu the phonetically-titled indoor shopping mall, which has all the usual high street names but does contain one unique feature – Liz Leyh’s small herd of concrete cows which, those with a long enough memory will recall, achieved a brief moment of notoriety as the first piece of public art that inaugurated the birth of the town.  There’s also a big pink handbag although I can’t find a label and I’m not sure if this is art or advert.  Another, more recent, sculpture by Bill Woodrow sits outside Waterstones, unfortunately, not one of his early witty works bent into shape from thin, sheet metal but one of his later, cast bronze clunkers – this time a book attached to a ball and chain.  It looks like a copy of one the British Library had and similar in style to the dreadful thing he dumped on Trafalgar Square’s fourth plinth a few years ago.  For some reason the ball and chain have a little protective barrier around them, which could be a sort of Conceptual Art coda but I suspect is an intervention by the health and safety police, fearful that some enraged critic might give the thing a kick and hurt his foot.

I manage to restrain myself and once safely passed this hazard and out the other side of the mall there’s a bit of an outdoor market with a display of freshly polished fruit and veg contrasting with scruffy stacks of old videos and second-hand mobile phone accoutrements and all the usual stuff – junk or treasure – that you usually find in such places.  It makes a strangely pleasant change to the generally neat and tidy bits of the town I’ve seen so far.  Another strangely pleasant piece of art also comes into view and, although it doesn’t seem to have a plaque, the style and content is instantly recognisable as one of Michael Sandle’s wonderful sculpted images of a man swinging a sledge hammer smack into the face of a television screen – something I’m sure we all relate to with increasing frequency.

Next comes the so-called Theatre District although, except for the actual Milton Keynes Theatre – currently advertising such tempting treats as Aladdin with Priscilla Presley and The Glenn Miller Story with Tommy Steele – as far as I can see the area consists solely of places to eat rather than act.  There is a notice outside the Slug & Lettuce announcing the Weight Watchers’ meeting that takes place every Tuesday – and though doubtless a performance of sorts, I’m not convinced that this can really be classed as theatre.

Finally, the end of Midsummer Boulevard madness and destination MK Gallery is reached and…it looks a bit sort of closed.  A sign helpfully confirms that I should have done my research a bit more carefully before setting off.  The gallery’s been open fifteen years and yet now, when I finally get to visit, I find that I’m six weeks too late.  Closed for renovations and extensions, it won’t reopen for another two years.  Drat!  But not a complete waste of time as there is a rather neat little display of archival ephemera about the show that opened the gallery in 1999 – Gilbert & George’s The Rudimentary Pictures. Even better, there are none of their original works on show to have to look at, just photos of the private view featuring Serota, Rosenhthal, Nairne, Angela Flowers, Jay Jopling and Sam Wood plus, of course, Tweedle Dee & Tweedle Dum themselves. There’s a little cardboard maquette showing the layout of works in the three interlinked rooms plus a giant poster of the couple.  Best of all, however, are the cuttings from local paper detailing the exciting dawn raid by police, alerted to the allegedly pornographic nature of some of the work on display, and the complaints from a local resident, appalled that his culture-loving daughter had attended what she thought was going to be a nice exhibition of art and instead been confronted with photographic prints of the artists’ genitalia alongside the kind of sordid graffito that a respectable newspaper declines to print without the use of asterisks.  Apparently the show attracted 18,000 visitors but whether they were interested to find out what was hiding behind the asterisks, or simply desirous of checking out the artists’ credentials, is unrecorded.  I exchange a few words with the charming invigilator, a native Keynsian, who has only good words to say about G&G and MK itself, of which she is a proud resident.

I’m about to reverse my footsteps and go back down Midsummer road and head home when I notice a sign for Campbell Park.  I’m not in a hurry and since the sun has miraculously appeared from behind the clouds and is now beaming forth I decide to walk on.  After all the contrived, concrete modernity and all the people bustling about and chattering away in the shops and market I find that, within a few steps, I’ve suddenly stepped into Shangri La or somewhere like it…a truly amazing vista stretches away into the distance with light dappling through a forest of glorious trees spreading their autumnal coloured leaves like a …well, you get the idea.  Even better, there’s barely half a dozen people and dogs walking around this Eden, everyone else being stuck in the consumerist Babylon shopping malls.  Ok, enough of the mixed geographical, quasi-religious metaphors, suffice to say that this place even manages to lighten the heart of a grizzled old curmudgeon like myself who tends to avoid the dangers of the countryside and only feels save within reach of a frothachino and some lungfulls car pollution.  And then when, I think it can’t get any better, I spot a sign that says Art Trail…and off I go.

On the top of a man-made mount, reminiscent of Primrose Hill, proudly stands a white metal beacon by Liliane Lijn, which still looks pretty good despite the scribbles of graffiti on the wings and the hippie asleep at its base.  I tiptoe away, down the hill and circumnavigate the park, successfully managing to find the other six sculptures, that vary from Allen Jones’ heavy metal head to Robert Koenig’s wooden totem pole and Clare Wilks’ circle of interwoven willow saplings.  All look good in today’s light.  If only the citizens of Milton Keynes could get together a raiding party and grab the Henry Moore that so badly mislocated in the piazza outside Kings Cross station.  It would look sensational in the middle of the cricket pitch here and only cause a bit of minor inconvenience when they’re playing their matches.

After a slightly dodgy start, by the time I end my sojourn in the country I’m feeling really rather perked up and ready to retrace my steps and head back to the real world.

*For any pedantic Italians, I know it should be panino and that panini is the plural but, hey, who’s counting anyway and no-one’s ever going to eat more than one of these, that’s for sure.