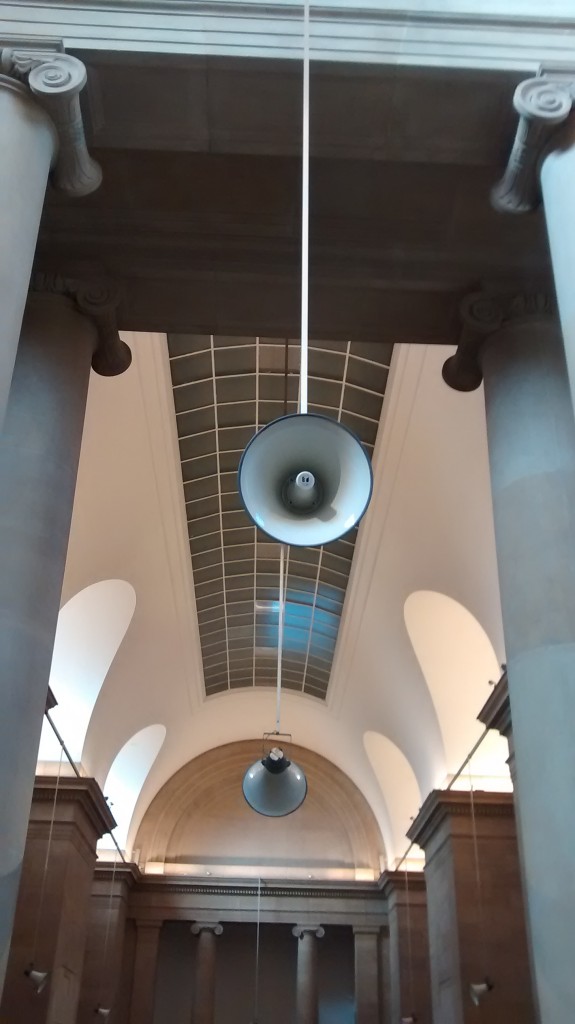 Meet up with Richard in the Duveen Galleries, the wide aisle of exhibition space that runs down the centre of Tate Britain. It’s a massive area and, like the Turbine Hall at Tate Modern, consistently seems to give artists and curators a headache when trying to decide how to make the best use it. Off the top of my head I can remember the Galleries being bisected by the brick wall of a semi-detached surburban house; providing a temporary hangar for Fiona Banner to squeeze in a matching pair of jet aeroplanes; and, somewhat more traditionally, giving the arena for Anthony Caro to display his clunky metal helter skelter – all memorable in their own ways but perhaps none of them a truly great fit. In fact, the space probably looked about as good as it’s ever going to get when, a couple years ago, it was reconverted back into a Victorian sculpture court and temporarily filled with a stash of old-fashioned classical bronze and marble statues and busts. I seem to remember Pandora was there, opening up her box, and I’m sure someone was wrestling something though whether it was Jacob and an angel, Hercules and a hydra or Blair and his conscience I can’t quite recall. The works all looked terribly dated, difficult to dust and a wee bit silly but they were certainly the right shape, scale and size. Arguably, the best use of the space made in recent years by a piece of site-specific modern art was when Martin Creed was allowed to turn it into a running track and fired the starting pistol that sent a continuous relay of sprinters along a hundred yard dash – terribly modern, no need to dust but perhaps still a wee bit silly.

So, what is on show today? At first sight it’s hard to see any art at all and, in fact, there is no art to see as Susan Philipsz has decided to present us with one of her ‘immersive sound environments’, a form of art that is designed to be heard and not seen. War Damaged Musical Instruments, as the piece is called, does exactly what it says on the tin, or rather what it emits from the crumpled metal cornets, saxophones, trumpets, flugelhorns and other items of orchestral wreckage collected from European battlefields over the past two centuries. Philipsz has visited army museums in Berlin, Munich and our own Kneller Hall and persuaded them to loan her a variety of instruments that went to war but did not emerge unscathed. In fact she’s deliberately chosen the stuff that got very scathed indeed such that, no matter how hard they puff and blow, the professional musicians she’s employed can barely manage to produce anything more than a squeak or parp, let alone sustain a note or tune.

So if the musical instruments she’s gone out of her way to choose can barely make any sounds, what on earth does her sound piece sound of? Good question. Not only is there no art to see in these massive Galleries there’s precious little art to hear and it’s only after standing around for a while that one does finally tune in and begin to pick up the occasional squeak or parp referred to above. For most of the time silence prevails, otherwise there’s just the background chatter coming from people wandering round the other exhibition rooms pierced by the occasional clatter of heels when a visitor wearing stilettos walks past.

According to the accompanying leaflet, the wrecked instruments are, in fact, playing the Last Post albeit ‘the tune is fragmented to such an extent that it is almost unrecognisable’. Well, I think we can delete the word ‘almost’ from that sentence and insert ‘completely’ as even with ears fully pricked up, no-one is going to Name That Tune in a hurry. Philipsz’s piece is apparently part of an arts programme commemorating the First World War and if she was trying to find a metaphorical artistic expression to exemplify the sheer futility of that dreadful event then she has succeeded admirably.

Richard and I retire to the Members Room where I trial the Belvoir elderberry presse and have to agree with the advertising slogan on the bottle, that it’s 100% good. As usual we chat about the latest exhibitions that we’ve been to see and, to my amazement, he slags off the Calder show at Tate Britain, which I think is probably the best thing on in town at present. This is the show that I predicted will lead to a long overdue re-evaluation of Calder’s reputation and put him back where he deserves to be, in the top rank of 20th century artists. Richard snorts derisively and I’m about to rehearse my arguments in defence of the artist and explain just why it’s such a great show when I realise that I don’t have to do that anymore, I can just refer him to the blog. And so this is what I do. Of course, now when he disagrees with my opinion about an exhibition he’ll have to write a comment in the blog box. And the wonderful thing is that, being the moderator of this particular debating platform, if he comes up with anything too clever I can just push a button and delete it. Gosh, if only we could do this in real life.

When Richard asks my opinion of Artist and Empire, the current main show at Tate Britain, I refer him to my brutal blog critique but he still decides to take a look, anyway. I definitely don’t want to bother seeing the show all over again so we part and I go off to take a look at one of the new featured rooms from the recent rehang. Hockney’s Double Portraits consists of three large paintings with six sitters and one feline: Mr and Mrs Hockney Senior; Celia Birtwell, Ossie Clark and Percy the cat; and Wayne Sleep and George Lawson, which has been left in an unfinished state. Evidently Hockney came across this last work recently during a clear out of his studio, accepted that he was never going to get around to completing it and decided to donate it to the Tate. Looking at these paintings now – especially the one of Celia, Ossie and Percy – it’s strange to think that they were considered so radical and exciting when they were first painted in the late ‘60s and early ‘70s. But I suppose in comparison to the gloomy sincerity of much of what preceded them maybe they seemed to represent the epitome of a bright, shiny optimistic vision of the future.

They still look quite pleasant and certainly much, much better than the terrible landscapes that Hockney has been churning out recently, but they do seem like cool, technical exercises and it’s hard not to atomise them and separate out the bits that succeed from the bits that don’t. So, on the plus side we can place the lilies, the tulips, Mrs Hockney’s eyes and both the faces of Ossie and Celia. Unfortunately, in the red column go the flower vases that appear two-dimensional; Mrs Hockney’s caricature mouth; and poor Percy, who is so sinisterly Persil white, that he gives the appearance of having wandered in from another painting. Hockney’s also given up completely with Ossie’s feet and decided to cheat his way out of the problem by burying them in the pile of the carpet*. His biggest failure, however, comes with the struggle to get the perspective right for Ossie’s shoulders, arms and hands. And it’s hard not to think that Wayne Sleep’s left arm was the straw that broke the artist’s back. I wonder how many times poor David must have painted and repainted it and still realized that he hadn’t got it quite right before just deciding to keep calm and give up. Of course, it wasn’t long after stopping work on this painting that Hockney began his lifelong crusade against all forms of fixed point perspective, spending half century unsuccessfully trying to find other ways of representing depth in painting. Perhaps the moral of the story is that if at first you don’t succeed you should go back to Sleep and try again till you get it right.

*An alternative reading is that Hockney is putting a new spin on the myth of Diana and Actaeon and that poor Ossie, having transgressed against Celia, is being punished by being turned into a carpet, presumably prior to being shredded by Percy’s claws or maybe hoovered to death by the cleaning lady.