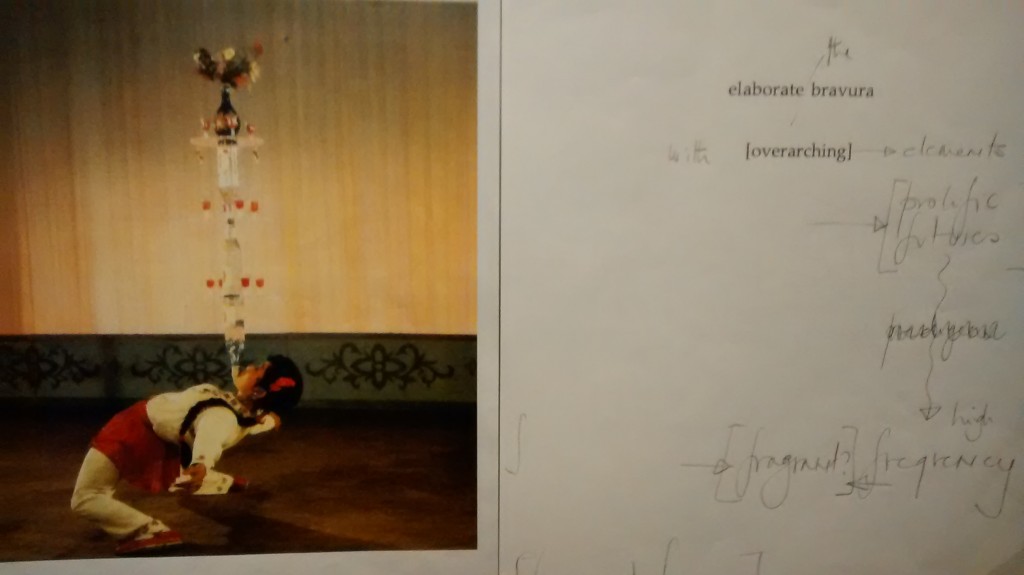 Start the day at Finchley Road tube station and take the steep walk up to the Camden Arts Centre to see and hear, Rose English’s sound installation, A Premonition of the Act. Unlike Susan Philipsz’s all too whispy and ethereal sound sculpture that currently fills – or, rather, fails to fill – the massive airspace of Tate Britain’s Duveen Galleries, English’s work is a much better fit for the smaller, but still substantial, Gallery 1 at Camden. Instead of the usual white cube display space, this has now been transformed into a very black rhombus with spotlights picking out a sequence of collages, that combine photographs and scribbled notes, and run in a neat line around the four walls of the Gallery. Evidently it’s these images and descriptions of Chinese acrobats and jugglers, practicing and performing their impossible contortions and balancing acts, that’s inspired English to create her libretto. Yes, she’s come up with a proper libretto, for unlike Philipsz work which, as I recorded in an earlier blog, is a flaccid mix of parps and squeaks, English offers up a more familiar form of art for the ears. In fact, if her piece was performed live in a concert hall, and with the lights turned on – instead of coming from loudspeakers in a dark art gallery – we might even think we were listening to a normal musical recital rather than attending a special art installation. With no musicians or vocalists to focus on, I suppose that hearing the music in the dark may help aid the concentration though I’m not sure that it adds very much otherwise but if the artist wants it heard that way then who am I to argue? And, of course, there’s the advantage that if you get bored listening then you can spare everyone’s blushes and exit, incognito, under cover of darkness.

Anyway, back to the libretto. This has no dialogue to deliver nor narrative to inform and is, instead, a form of concrete poetry, composed of words and phrases that repeat and relate back to the images snaking their way around the Gallery walls. While it’s not easy – at least, not for my old lugoles – to pick out each phrase as it’s sung, the delivery by soprano and chorus is as vigorous and full-throated a warble as you could possibly want. And, backed up by Luke Stoneham’s percussive music score, the happy noise reverberates through every cubic inch of the Gallery space.

Not being much of a musicologist, I’m not sure what the correct term is for this type of choral work but the insistent, plodding beat and pulsating rhythm suggest to me a bit of Gregorian chanting crossed with the kind of deliberate avant-gardism that John Stevens and the Spontaneous Music Ensemble were experimenting with back in the 1970s. I quite enjoyed the time I spent listening to the piece but felt that I’d probably gained all I was going to get from the experience after about ten minutes, although I’m sure that English’s fans would insist that the rewards multiply if you have time to experience the full 72 minute performance. They may well be right as it’s the sort of repetitive sound that, if listened to for long enough could, I’m sure, send one off into a sort of meditative trance state

Supplementing this main display are videos showing more examples of the kinds of spectacular feats of human dexterity that are as astonishing as they are pointless. Frankly, when I see a tray of glasses placed on the sole of an acrobat’s feet and then watch her twist and writhe from one absurd yoga position to another, I’m not so much impressed as left wondering just how many tortuous hours of practice and how many broken glasses it took before she mastered the bizarre routine. I suppose if one was being picky one might question how well these Oriental vaudeville performances resonate with the quasi-religious, Western musical forms but it’s probably best not to bother and just to go back into the dark, take a seat and let the mind drift off.

I’m tempted to go home, find my Sgt Pepper’s CD, grab some balls and see if I can reprise the juggling routines I used to manage when I was younger and more agile but, on second thoughts, it’s probably safer to stick to more sedentary forms of entertainment. Camden Art Centre has quite a good art bookshop in the foyer so I have a look around and find the ideal thing to ward off any potential mesmerising effects from English’s music. At £7, The Jackdaw magazine is a bit of an extravagance but it’s one that I occasionally indulge, since its coruscating critiques of metropolitan artworld machinations can be rather refreshing – the intellectual equivalent of putting one’s head under a cold shower of water or, to its critics, of being water-boarded.

If you’ve not come across the publication before then I suppose it would be reasonable to describe it as the scourge of the current artworld establishment, providing a forum for its editor and chief scribe, David Lee, to take hefty, heartfelt swipes at those targets he perceives to be the enemy of good artistic practice, whether curatorial, cultural or creative. The current issue is no exception and his leading article batters away at the Tate Galleries, the Turner Prize, Nicholas Serota, the Arts Council, Charles Saatchi and Jay Jopling. The British Art Show, currently on display in Leeds, is called a ‘farago’ and ‘the most pitiful collection of stillborn trash I have ever seen.’

As you may have gathered, Lee takes great delight in making snarky comments against those who he would deem the frauds and phonies of the current art scene and, for those of us on the fringes, it’s all jolly amusing. Of course, it’s very easy (and quite fun) to be rude and write splenetic knocking copy, highlighting the absurdities and incompetencies of the people, institutions and art that we dislike. That it’s far harder to compose a convincing, logical explanation to account for those things which we do like and admire is exemplified by the reprint of an essay by Roger Scruton, that’s also included in the current issue. When he says that so-called important art can be easily and readily defined as that which possesses the qualities of beauty, form and redemption, one is tempted to suggest he’s writing a load of old cobblers. And when he then goes on to invoke Rembrandt and Bach in support of his argument, one wonders how Turner got left out the pantheon since Scruton’s argument seems to rework the tautological tripe that Ruskin churned out a century ago in the first volume of Modern Painters. At least Ruskin was still only an undergraduate when he started writing his stuff whereas Scruton is a fully-formed philosophy professor! For a much more sensible and better reasoned inquiry into definitions of art, good and bad, I’d suggest taking a look at John Carey’s book, What Good Are the Arts.

By the time I finish reading The Jackdaw I’ve reached the Kings Head in Islington where I enjoy a quick lager before meeting up with Alan and Kate and heading into the turmoil of the Business Design Centre for this year’s London Art Fair. Someone very kindly sent me some VIP ticket to get into the fair this evening, although yesterday, I gather, there was an even more exclusive VVIP day to which I was not invited. Naturally, I feel a little snubbed at this but, after scarfing down half a dozen complementary Peronis, I feel in a forgiving mood. So, what was the art like at the Fair? Since my vision may have been ever so slightly distorted looking through my lager goggles, I think I’ll have to decline to comment at present and instead return in a couple of days in order to produce a more sober evaluation.