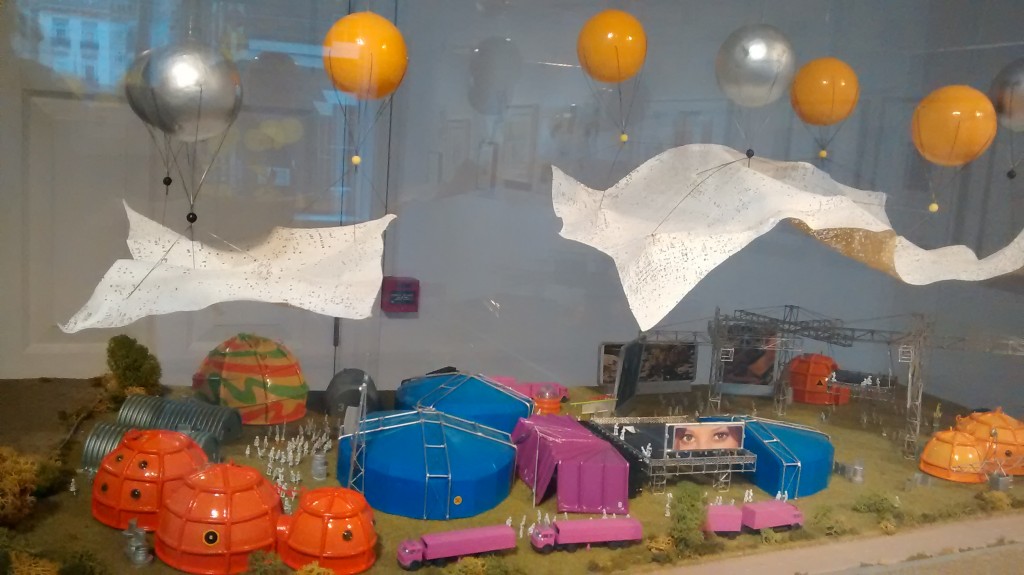 To Oxford Circus tube station and then walk down Regent Street to get to Molton Brown. No, it’s not a small, upmarket commercial art gallery but one of a posh chain of shops that bill themselves as London’s bath, body and beauty connoisseurs since 1973. Well, years ago when I finally stopped getting dandruff, my hair found another way of rebelling – it simply decided to drop out and leave for good. And it was then that I discovered Molton Brown’s special preparation thickening shampoo. God knows what’s in it, some kind of glue and gloop, but, whatever it is, a liberal application seems to plump up the few remaining strands of gray hair that cover my crown and transform them into a healthy swathe of solid silver bullion. At least, that’s the theory. I’m not particularly vain about my appearance, in fact, many would say the exact opposite, but when it comes to the natural ornamentation of the noggin, well, who wants to look like they’re ripe for a potting by Joe Davis? Anyway, this stuff works for me when I look in the mirror of a morning and also on anyone shorter than me who can’t see beyond the specially tonsured quiff. Unfortunately, if I’m approached by a giraffe or someone sneaking up from behind or if I’m caught on one of those social occasions where etiquette demands that I sit down, then the deception fails. When that happens, I’m revealed as having a thin patch that’s spreading like a map of Germany’s Second World War blitzkrieg on the rest of Europe. If Molton Brown is currently playing the role of Churchill and putting up a brave resistance, I know it’s going to be curtains in the long run unless I can find a Rooseveltian trichologist to come to the rescue with some kind of a D-day counter offensive.

In the meantime, I get another batch of the Home Guard magic potion and carry on down Regent Street in search of Heddon Street. This is where that famous photograph for the Ziggy Stardust LP sleeve was taken and, on reaching it, I see that fans have laid down bouquets of flowers to mark the spot and commemorate the recent sad demise of Mr Bowie. Frankly, I was taken a bit by surprise at the outpourings of grief and the official encomia from the BBC and some of the print media. I thought he made a few quite tuneful LPs, albeit a long time ago, but hadn’t realised he was considered quite such a cultural Olympian by the establishment. Although, the floral display here is really rather small – half a dozen bunches rather than any proper Lady Di sized tribute – so I can’t help wondering whether it was the media, not me, who misjudged the feelings of the nation.

Anyway, the actual reason I’ve come to Heddon Street is not to indulge in some mawkish sightseeing but to get to the Pippy Houldsworth Gallery where, my NECA listings chart informs me, Gavin Turk is showing work. Now, he’s an artist who usually manages to produce something interesting to look at and, indeed, he’s done it again except, I have to admit, I was expecting to get to see at least half a dozen pieces rather than the single, solitary item that is the totality of his offerings here. On further investigation, it seems that the Turk work is part of a series of individual pieces from a changing roster of artists that the gallery display in a special section identified, rather portentously, as The Box, a fact that I will have to try to bear in mind in future. Anyway, all is not lost for, along with Turk’s jeu d’esprit, Water Biscuit, which consists of a cheese cracker, balanced horizontally half way up an empty half pint glass, is a somewhat larger exhibition of works by Yuken Teruya. I confess that I’d never heard of this young artist before but judging by his enormous CV, his bulky bibliography and the long list of famous and influential galleries that have acquired examples of his work, I feel that I must be the only person in the world willing to admit such unforgivable ignorance. So, what is his work like and does it justify all the starman accolades? According to the gallery notes, he transforms, ‘…overlooked, everyday ephemera into microcosmic works of art.’ In this show he performs an undoubtedly nifty bit of origami, twisting and plaiting scraps of paper – sterling, euros, dollars, Monopoly money and McDonald’s takeaway bags – into tiny trees, complete with trunks, branches and leaves. He’s mastered a very clever party trick and I’d love to own one of these pretty little money trees but I think I’d still class them as craftworks not artworks – not that I imagine this verdict will impact too much on him or the views of his acolytes.

Heading west I reach Bond Street and then cut through the Royal Arcade to the best little corner shop in London, the William Weston Gallery. It’s a place that specialises in limited edition prints but not just any old prints, they always have top of the range modernist works and for the current display they’ve excelled themselves, pulling out the real, museum quality stuff. There’s an early Chagall self-portrait that shows how powerful he could be before he got old and sentimental; a Mary Cassatt mother and child that suggests the drypoint technique used here, rather than oil paint, was her true medium; a truly erotic Munch, and a wonderful Toulouse Lautrec lithograph of an actress that confirms his incredible skill and belies his reputation for being just a short libertine who was famous for making some colourful advertising posters. The Lichtenstein, Leger, Picasso and Warhol are also all marvelous and they’ve even managed to find an interesting, serious, unsyrupy Dufy.

Finally, after that inspiring treat for the eyes, it’s on to the Gazelli Art House, although I almost don’t manage to find my way into the gallery. The whole of the frontage has been camouflaged by a vast digital print that looks like a giant art deco, stained glass reredos. As a result, I don’t notice the main entrance, right in front of me, and instead manage to enter a side door, go down a corridor up a lift and then startle the gallery staff by bursting in through the double doors next to their office. But if they look slightly bewildered, then I must look disconsolate. The lift I used to make my surprise entrance was one of those coffin-like boxes but it wasn’t any feelings of claustrophobia that gave me the grumps but the fact that all four walls of the box were lined with mirrors. Of course, as soon as I step in, I’m surrounded by sights of myself from front, profile and behind and, whichever way I turn, can’t escape witnessing the frightening extent of my cranial nakedness.

Anyway, I try to put on a brave face and take a look at This is Today, the current exhibition on display here. As the title suggests, it’s a conscious nod to the famous 1956 Whitechapel Art Gallery show This is Tomorrow, in which artists, architects and designers got together to reveal their sci-fi visions of how they thought life would be in the future. There was a tremendous excitement and optimism about that show, which proved to be a prescient foretaste of the approaching Pop Art movement and the whole of the swinging ‘60s ethos in general. For their homage, Gazelli have gathered together some abstracts of the period, including works by John Plumb, Richard Smith and Bernard Cohen. These all look quite attractive but perhaps suggest the closing of one phase of the modernist experiment rather than the more exuberant start of another, implicit in the proto-Pop drawings and collages by Derek Boshier and Eduardo Paolozzi. But perhaps the most interesting items on display here are the models and maquettes from the archives of the Archigram architecture practice, although curiously some of these seem to date from the ‘90s rather than the ‘60s. Despite this apparent anachronistic twist, their space age structures and environments really do seem to capture the adventurous, optimistic spirit of those golden olden days when the future looked very bright and just about anything seemed possible. These days, when the consensus seems to suggest that we should be nervous about the future, maybe there’s a logic in preferring to look back and enjoy some of the nostalgic comforts from the past. But, I daresay these moods are periodic and it’s just a matter of time before things change again and everyone will be growing their hair long again and dancing in the street. Well, perhaps not quite everyone.

3 responses to “Glue and Gloop”