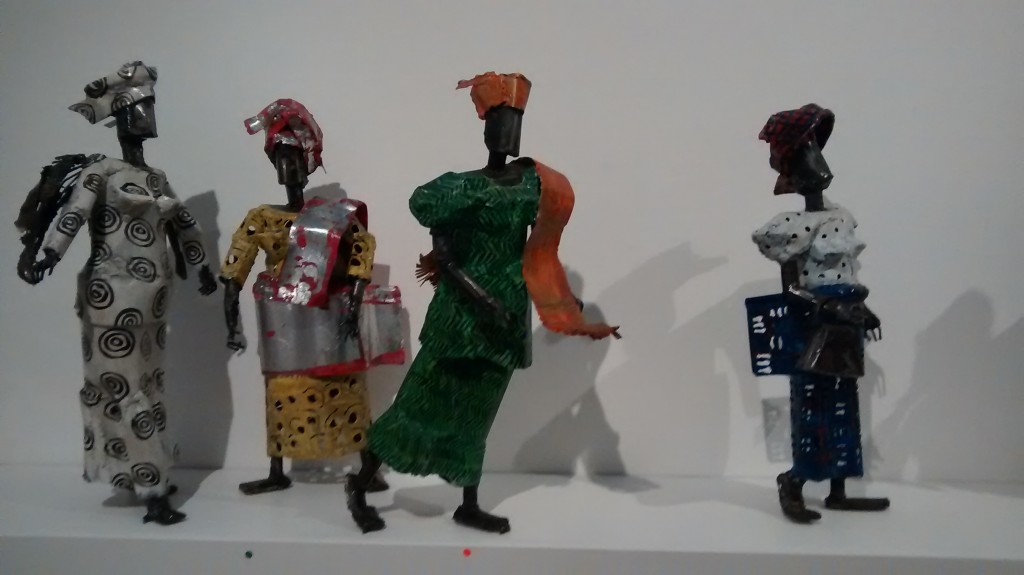 It seems like spring has definitely arrived today and sprung a leak somewhere up there in the sky, as I keep getting rained on as I go on my ramble around looking for some art to look at.  The weather is all annoyingly intermittent as if the drips can’t quite decide whether to fall to earth or remain in their clever, gravity-defying clouds.  It means that as soon as I pull up my hoody and unfurl my umbrella, the pitter patter starts stopping and I’m required to go into reverse gear, furling the brolly and unhooding myself – which is all a bit tedious.  Nevertheless, I press on and the first stop today is Green Park where, after a short walk, I get to the dry oasis of Marlborough Fine Art, which is currently showing work by four eminent sculptors:  Richard Serra, Anish Kapoor, Kiki Smith and Louise Bourgeois.  On this occasion, however, the work on display is a dimension short of the usual and, all suitably be-framed, clings comfortably to the walls of the gallery.  Instead of a display of their more familiar sculptural works, the current show is a collection of the artists’ prints, revealing how each, in their own different way, has applied their creative sensibilities to working with paper and inks rather than balancing sheets of steel, shining mirrors of metal, gathering assemblages of objects together or casting bits of bronze.

Serra is best known for his gigantism and the fun he has when pitching together enormous slabs of metal and, of course, it’s somewhat more difficult to recreate the sense of awesome majesty that his heavyweight sculptures project when the starting point is just a few hundred gsm’sworth of relatively thin white paper.  While clearly not as overwhelmingly weighty as the sculptures that he produces, his prints still retain a certain sense of power and depth.  It’s an effect he manages to achieve by applying what looks like a thick coat of matt black paste over most of the paper’s surface, leaving just a few virgin white spaces to escape the impasto onslaught.  Sometimes there are indentations in the dark goo but often it’s just the pure simple monochrome shapes that Serra offers up and they look surprisingly strong although I wonder if, for me at least, it’s because they conjure up subconscious images of the more serious skyscraper sculptures.

Kapoor has a slightly similar problem when trying to find ways of reproducing in 2-D the illusory optical effects that have made him such a sculptural master, whether he’s perfectly polishing bits of chrome or carefully chiseling deep black holes that seem to disappear into the infinity of a block of stone.  In one of his pieces here, he presents two sheets of paper acting as if they were the pages of a large open book, but instead of text there is just an expanse of blue that deepens, darkens and finally disappears into the point where the leafs meet in the middle and buckle.  Elsewhere, in a suite of prints, different pastel-coloured lipsticks have been applied to a series of labial pouts, with the illusion of depth and disappearance recurring in the gaps created where the curved spaces meet. 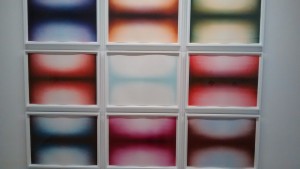 There’s a similar sort of subtly about the work of Smith, albeit she is working in a figurative style rather than playing in the abstracted realm of Serra and Kapoor.  The largest of her prints here shows Alice floating in a sea of tears and surrounded by a variety of wild fowl, all escaping from her looking glass world.  Other etchings are less fantastic but equally carefully crafted, whether it’s selection of desiccated flowers, a bunch of cat’s paws or a turkey stuck in a nest of twigs. 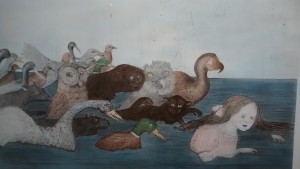 It’s not that much of a leap from the slightly strange and unnerving inhabitants of this wonderland to the full blown eccentric, idiosyncratic imagery that Bourgeois constructs, and which defined her long and productive career.  Unlike the rest of the artists, her prints seem to be like pages from a sketchbook of her free-thinking doodlings, with motifs that could well have evolved into specific sculptural works. Amongst these curious designs a sequence of spiders weave their way amongst a regiment of women with unfeasibly large breasts although, most peculiar of all, is her vision of St Sebastian.  According to Bourgeois it seems that the arrows that struck him didn’t just complete his martyrdom but also terminated a process of gender reassignment that he was apparently undergoing, although I’m not sure this is related in the traditional biblical texts.  Neither an expert on Freudian symbolism nor contemporary feminist theory, nevertheless, I think perhaps that Bourgeios could be making some sort of comment on the macho, phallocentric imagery and processes prominent in much of the male sculptural tradition – though whether she would have applied this to her colleagues in this exhibition must inevitably remain a mystery. 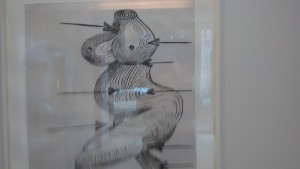 All-in-all, it’s quite an interesting little show and worth a look and if you want a private preview then there’s also a rather neat online catalogue available on the gallery’s website which shows most of the works.  Heading up New Bond Street I notice that the Fine Art Society is showing a display of prints by the famous aesthete and paint-flinger, James McNeill Whistler.  Unfortunately, I’m feeling a wee bit soggy at this point and in a bit of a hurry so I just pop in for a very quick whizz round although that’s more than sufficient to reconfirm my opinion of the sheer skill and panache of this master of the print medium.  Gosh but Whistler was a genius at picking out the fine details of the scenes along the quaysides of London or the lagoons and canals of Venice.  And whether it’s a line of buildings, a simple row of shops, a still life arrangement or a portrait study of some society beauty, the man manages to imbue the scene with a real colour and vitality through the sheer precision of his fussy, intricate lines.  I make a mental note to pay another visit to the show when I’ve dried out a bit and have more time to take a proper look.  In the meantime I side step off to the Parafin gallery which has a display of paintings by Alison Watt that, according to the press release, were inspired by Rubens.  I suppose like most people, when I hear mention of that august name I think of colour, action, sex and violence – Samson and Delilah, The Rape of the Sabine Women, The Massacre of the Innocents – lots of flesh and blood and large callipygous women with heaving bosoms which, if not quite as absurd as those that Louise Bourgeois constructed, run a pretty close second.  So what about Watt?  Well I think the trade descriptions act has been flouted here.  There’s no colour at all, just a dozen versions of some folded white towels of the kind that Lenny Henry might well expect to find in one of his budget hotel adverts.  Rather than Rubens she seems to invoke the spirit of Georgia O’Keefe, and paints with similar style and, if you’re a fan of one, then you’ll very likely appreciate the other.  I have to confess that, personally, I prefer the more traditional Peter Paul and all his manic over the top excesses. 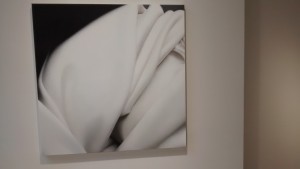 Finally a couple of tube rides gets me to the October Gallery and, if it’s still raining outside, at least inside here there’s a real bit of sunshine in the form of the steel sculptures of Sokari Douglas Camp.  Using Blake and Botticelli as her starting point, Camp has transformed some of their classical imagery into statues of women from her native Nigeria.  So we get the Three Graces and some of the characters from the famous Primavera painting reworked as flamboyant, life sized figures in brightly painted metal.  There’s a tremendous exuberance about the decorative cast of characters that fill the Gallery and lifts the spirits, almost sufficient to send me out and singing into the rain. 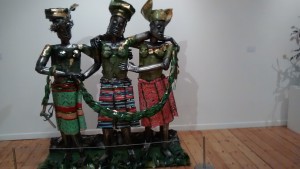 At which point I am pleased to announce that I am off to sunny Spain for a brief holiday, meaning that there will be an intermission of a week or so while I go away to look at some Iberian art and hopefully recharge my blogging batteries.