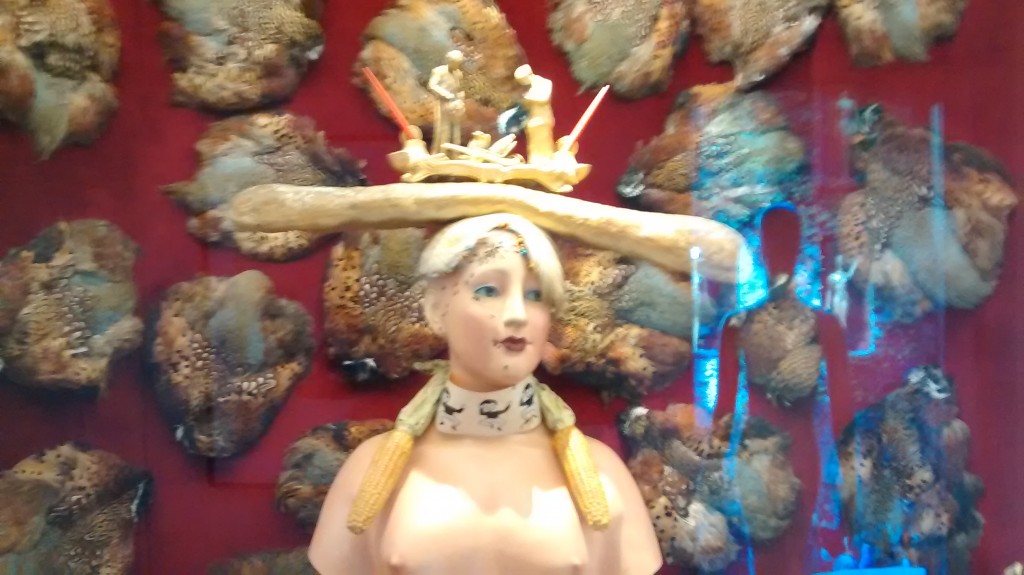 And it’s still sunny on the Costa Brava today as I head off on a simpler, flatter, drier and altogether far less adventurous coach ride to Figueres, birthplace of Salvador Dali and now home to his spectacular Teatre-Museu.  Not surprisingly, the general, overblown, slightly silly Surrealistic décor here is in much the same vein as that of the Casa-Museu in Port Lligat although on a far grander scale.  Whereas yesterday the visit was constricted to a small guided tour party of ten, today it is very much open house and I am but one of a few hundred other cultural tourists all wandering around gawping at the extravagant Dalinean eccentricities set before us. 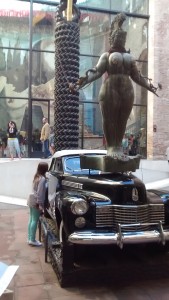 At the entrance here, instead of being greeted by a large stuffed bear, there’s a wide open lobby into which Dali has parked his rather stylish old Cadillac.  No longer a mode of transport but an object d’art, its shiny black carapace is now surmounted by some kind of statuesque goddess figure stuck onto its bonnet, while inside both chauffeur and passengers are mere mannequins, bedecked by a shroud of clinging ivy.  Just beyond is a great column of tyres supporting a small upended fishing boat which seems to be leaking great waxy blue blobs of…well, I’m not sure what they are, nor what exactly is the purpose, symbolism or significance of the umbrella that seems to be stuck on top of the mast.  But, hey, that’s Surrealism for you and it’s unreasonable to expect any reason or logic, especially from the Dali version.  Anyway, once past these obstacles, physical and metaphysical, comes the main building where the visitor is introduced to all the usual cascade of unusual nonsensicalities and all the expected examples of the unexpected.  Curiosities appear at every twist and turn of the route round the twenty or so rooms of this Theatre of the absurdity and soon the strange becomes typical, whether it’s the stuffed crocodile lamp holder; the gilded orangutan skeleton; the plaster cast of the Venus de Milo that’s been customised into a cupboard and is happy to show us her drawers; or the bust of the woman balancing a loaf of bread on her head, onto which has been placed a sculptural version of Millet’s Angelus.

Unlike the House Museum, there are a lot more paintings on show here as well as several very site-specific murals that Dali has added to help create the impression that the visitor has entered into a very particular kind of adult nonsense fantasy world.  It’s slightly reminiscent of the casino architecture of Las Vegas and just about fulfills the same aim of offering up a sort of Disney World of distraction for adults.  Dali clearly expended a great deal of care and effort in his desire to try to startle his audience, presumably hoping either to make us gasp in shock and awe or maybe just scratch our heads in wonderment.  On the whole I think he probably succeeds in his presentation, achieving an appropriate, highly crafted quantum mix of strangeness and charm. 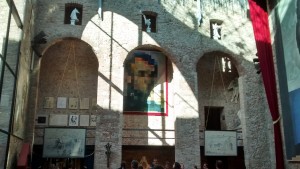 If there is an underlying theme to be detected in Dali’s works here then it’s probably less in the traditional Surrealist fascination with the world of dreams and the subconscious than in his interest in the optically illusory effects made possible by the magic of the artist’s palette and craft.  So, for instance, there’s the large scale portrait of Dali’s wife that fills an entire wall but, retreat a certain distance, squint the eyes and you’ll discover that, as Gala disappears, the rather crudely pixilated background magically transforms itself into the head of Abraham Lincoln no less.  Then there is Dali’s interest in holography – as exemplified by the Portrait of Alice Cooper’s Brain – and his attempts at stereoscopy, where a painting is duplicated and if the viewer manages to stand in exactly the right position and cross his eyes in a certain way then a not too convincing 3-D effect is sort of achieved.  More successful is a terrifically artful ceiling painting that gives Dali the opportunity to show off a flamboyant display of perspectival illusion where a truly dramatic example of foreshortening manages to place us right under the bare feet of artist and muse as they ascend near vertically straight up into the heavens. 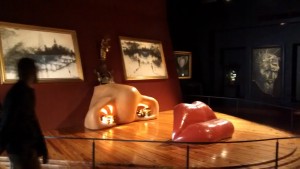 Finally, there’s the famous Mae West room where a portrait head of the ancient Hollywood siren and wit is constructed from the famous pouting red sofa lips; a pair of twin, nostril fireplaces; and couple of paintings of Paris hung on the background wall.  Walk up a little ladder and stare through a special lens down onto this room-sized assemblage and if you find the correct angle everything suddenly falls into position and there is the great lady in all her slightly faded glory. 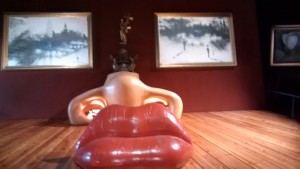 Of course, most of what Dali produces is clever, entertaining and flashy but is it successful art?  Well, on a somewhat more serious side, Dali wasn’t just a rambunctious showman and I’m sure he didn’t want to be remembered only for being a professional madman and eccentric clown.  It’s hard to believe that he didn’t also feel that he deserved a place in the art history books.  So, amongst all the rooms of noisy, chaotic displays of sculptural assemblages and tricksy murals there are also a couple of rooms of straightforward, conventional exhibitions of his paintings on canvas.  First he shows examples of his early works when, as a very young artist, he tried out a variety of familiar Modernist styles, some of which he was clearly more comfortable with than others.  Perhaps surprisingly he seems to have struggled a bit with his attempts at Impressionism but then he fared much better with variations of Picasso’s Blue Period Expressionism and Neo-Classicism. Then he experimented with a sort of crude, semi-abstracted collage form of Surrealism before finding his own true style, the familiar super-realism that echoed back to his heroes Velazquez and Vermeer but could be applied forward to recreating his own, technicolour dreams and fantasies.  There are a few classic Dali paintings here like Atomic Leda (the portrait of Gala with a swan) and The Spectre of Sex Appeal (where the little boy with the hoop gazes at the distorted figure on the beach – an unfinished composition of flesh and fabric that requires crutches to maintain its pose).  It’s a pity but many of his most famous motifs – the melting clocks, the ants, the elephants with spindly legs, the giraffes on fire, the swans reflected as elephants, and the rest of his stable of unstable props – are missing, currently hanging on the walls of other galleries around the world.  Perhaps the best work in the whole circus here is the very simple, very beautiful, very un-Surrealistic, very realistic portrait of Gala at home with her back turned towards us as she gazes out to sea, daydreaming of Salvador or perhaps someone or somewhere else. 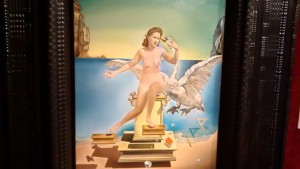 And what of Dali’s legacy?  While Surrealism nowadays is best known for its manifestations in the visual arts, the movement did, of course, originate as a literary style dreamed up by a gang of Parisian intellectuals who took themselves and their jokes very seriously indeed.  After initially embracing their Spanish cousin they fairly quickly tired of his reactionary views, delight in self-promotion and fondness for celebrity and financial reward which offended their own puritanical rigour and desire to be taken seriously.  As a result of his misdemeanours he was officially expelled from their club although most people today would probably consider him be the very personification of Surrealism and, whatever the history, the man with the magic moustache has undoubtedly had the last laugh, with the Dali Theatre-Museum attracting thousands of visitors each year.  And while just about everyone has heard of the name of Dali and even those with little interest in Modern Art would probably recognise his face and maybe even some of his paintings, who could now quote a single line of the poetry from the founders of the movement Eluard and Breton?  And as for the idea of the celebrity artist with the high profile brand and international name recognition, I’m sure that the Surrealist dreams of many young artists today revolve around a subconscious desire to follow in the Dali footsteps and those of his successors like Warhol and Hirst. 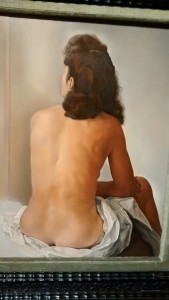 One response to “Rather Crudely Pixilated”