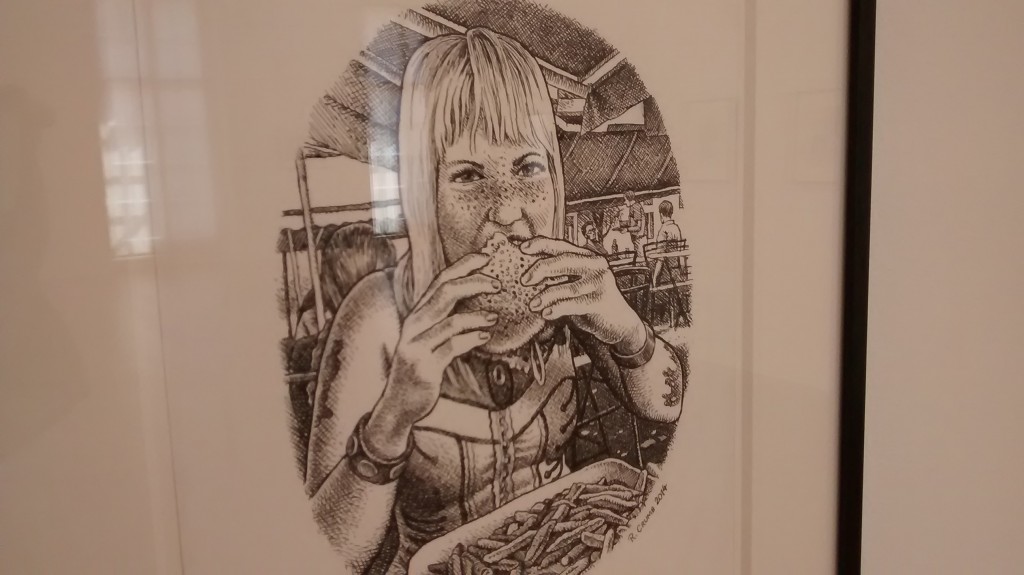 Gosh but it’s nice to be back home in the UK after my sunny Spanish sojourn.  But even though I’ve brushed the sand from my espadrilles, it seems that I haven’t quite escaped the place yet since scanning through my NECA gallery listings guide I can’t help noticing that David Zwirner has an exhibition entitled Cadaques.  And this, of course, was the very pleasant little fishing village on the Costa Brava that I visited last week en route to the Salvador Dali House Museum.  I take this to be some kind of Surrealistic good omen and so set off to visit the gallery to see what the show is all about.  And, sure enough, the top floor room has a small glass case of ephemera amongst which is a photo of the godfather of British Pop Art, Richard Hamilton, looking nicely tanned and sitting at a café in Cadaques sipping a glass of Cocoa Cola.  Thanks to all those screen prints by Andy Warhol, this is the beverage most often associated with Pop Art so it seems rather appropriate that Hamilton has chosen this particular drink to quench his thirst.  Then again, I suppose he should really have ordered an aniseed liqueur – and not just any old pernod or pastis but a Ricard’s.  Why?  Well, this particular brand of sticky liquorice liquor has a very distinctive logo – essentially the name spelled out in a specific topographic style of chunky, shadowed lettering – that Hamilton borrowed and then tweaked into little arty joke.  Basically he inserted an extra letter ‘H’ and thus turning Ricard into the aspirational Richard and echoing his own forename.  It’s a bit of a labored joke but it seems to have amused the artist because he didn’t just create a series of prints with the altered logo but also went to the trouble of producing a bottle and ashtray, all of which can be seen in the little exhibition here.  As for the rest of the show, at first sight it seems to be a series of picturesque views Cadaques but closer inspection reveals the landscapes to be French.  In fact it’s a postcard view of the village of Miers and the large, swirling rock formation in the foreground is not, as the unwitting might assume, a famous geological feature of the region but rather a scatological joke relating to the laxative effects of the local spa waters which are apparently famous throughout the country. 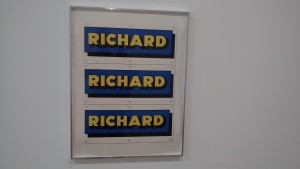 The other two floors at Zwirner’s have been given over to a display of the very skilful graphic art of Robert Crumb and, in particular, the series of drawings produced for Art & Beauty, a magazine that he produces from time to time.  Those familiar with his work will know that the artist has a penchant for a rather particular form of female beauty, the sort that celebrates youthful American womanhood in all its full callipygous, voluptuous pulchritude.  Thus we are treated to a range of typical scenes from daily life in the States where models stuff themselves with burgers or stand around at the mall, exercise at the gym or pose on the beach.  And whether it’s a plate full of fries, a line of ripples in the sand, or the burn of a gluteus maximus muscle at full stretch, Crumb manages to capture every beautiful twist and turn of the scene with his meticulous precision penwork of dots, lines and hatching. 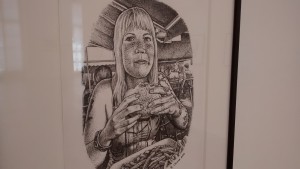 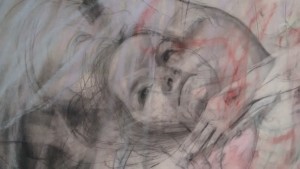 The effect is somewhat similar to when the voyeur prints up a roll of film only to discover that a fault in the camera’s winding mechanism has resulted in a sequence of shots that have been double, triple or even more multiply exposed.  But, in the end, even if some of the particulars are all a bit blurred, I think it’s fair to say that we still get a pretty good picture of what was happening in general. 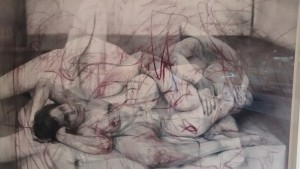 The next bit of the route – east across Regent Street and then down a street by the side of Liberty’s to get to the Sadie Coles gallery – is a journey from the sublime to the rather ridiculous.  If Jenny Saville’s erotica is poignant and profound and adult, in the proper sense of the word, then the nudity in Richard Prince’s series of pictures is crass and comic with the humour very much toward the sniggering schoolboy end of the spectrum.  Prince is well known for appropriating imagery from various commercial sources and this time he’s blown up a batch of corny John Dempsey nudist cartoons, in which lascivious men make desperate puns and innuendoes aimed at their well-endowed companions.  On top of these excruciatingly trite graphics Prince has then added an extra layer of graffiti with a mix of scribbles, blocks of monochrome background colour and rehashed versions of some of his own so-called hippie drawings – deliberately crude and colourful faux naif heads and bodies.  The end results are, as you can imagine, very deliberately ghastly which, presumably, must be the point.  Although, if that is the point, it’s hard to see exactly what the point of that point is.  Like it or not, I suppose this kind of art – the art of the deliberately ugly, banal, trivial, unpleasant, rude, crude and crappy – reflects some part of mix that goes into making humanity human and so has some kind of claim to be included within the contemporary artistic canon.  But if it’s just about possible to make some kind of intellectual justification for accepting these kinds of works as having a kind of artistic validity, I really do wonder who on earth would want to buy any of these horrors to hang in their homes. 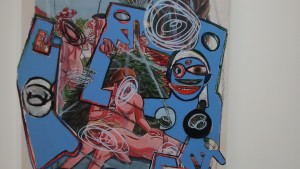 Finally I dodge round some backstreets to get to the Photographers’ Gallery to see the small displays of work from each of the four finalists in this year’s annual Deutsche Borse prize.  Laura El-Tantawy presents a series of slides of striking images from the demonstrations and protests in Egypt’s Tahrir Square during the recent revolutionary activity there; while Tobias Zielony details aspects of the lives of a group of African refugees living in Europe; and Trevor Pagien’s video clips and collages relate to mass data collection, drone activity and state surveillance snooping that has grown increasingly intrusive with the advent of ever more powerful IT systems.  All of these strike me as relevant, worthy and interesting but, by the same token, fairly standard photojournalistic essays whereas Erik Kessels’ presentation is not just an example of a cool piece of photographic conceptualism but has an added element of emotional depth.  His work consists of a partly dismantled car that was in the process of being rebuilt, alongside a series of pictures of various parts of the machinery that had been taken apart, cleaned up and were waiting to be reassembled.  What gives this collection of cold metal and clinical documentary imagery its added poignancy is the fact that work on the project has been forever terminated due to the sudden, unexpected death of the amateur enthusiast engineer who had undertaken the demanding exercise in reconstruction: his father.  Thus the installation is both arresting artwork and rather moving memorial and, as such, I think would make a very deserving prizewinner. 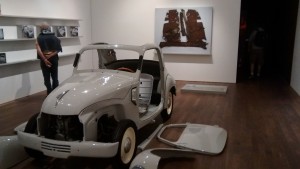