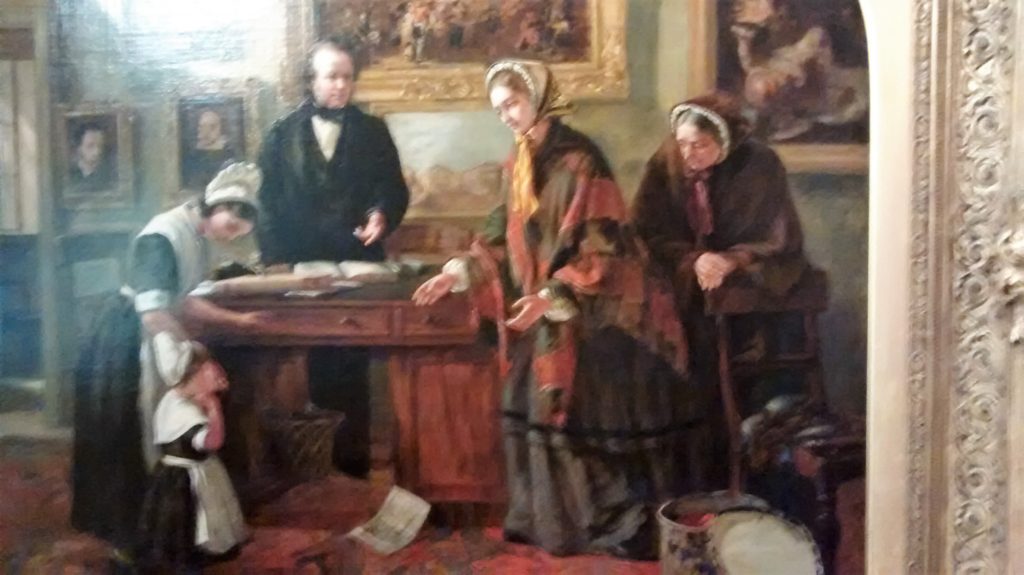 Get to Euston station and decide to use my trusty Citymapper app to guide me on my route to The Foundling Museum.  This is another of those places that I’ve known about for years and always meant to go along and investigate what they’ve got to offer but never quite got around to doing so.  So, today’s the day and I carefully follow the directions given to me by my pedestrian satnav gizmo right to the point where it tells me that I’ve arrived at my destination.  Except I seem to be standing in the middle of a park and while I appreciate the rustic charm of this oasis of greenery in the heart of the city, with its picturesque arrangements of trees, shrubs and ancient gravestones, when I look around I can’t see anything that resembles a museum of any sorts.  The first person I see when I exit the park is a bearded man standing on the steps of a building with a sign announcing that it’s the Buddhist Centre for Peace Culture and Education.  Fortunately the fellow knows about the Foundling Museum but his directions leave me a bit confused and I have to ask him to repeat them, at which point he gets really quite unnecessarily ratty, as if I’m deliberately trying to be obtuse and waste his time when he has several other pressing commitments of much more importance to which he should be devoting his attention.  Nevertheless, I manage to retain my composure as I listen to his grumpy, reluctant reiteration, telling me which road I need to take.  But can’t help thinking, as I set off once more on my journey, that while I may be having a bit of trouble reaching my cultural destination, he’s got an awful lot further to go to get anywhere near achieving the spiritual one upon which he is presumably embarked. 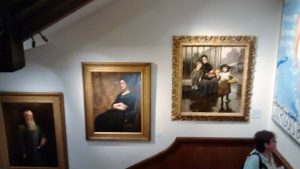 Anyway, having finally found the Foundling Museum and had a good look all around it I have to say it’s a bit of an odd and confusing mishmash of spaces and I’m still not entirely sure that I fully understand either the history of the place or the extent of its current charitable purpose.  In general terms, it seems that in the mid-18th century a retired sea captain, Thomas Coram, established what is described as a hospital for young children, although it seems actually to have been more like a sort of institutional foster home for abandoned or unwanted babies.  Among Coram’s first philanthropic supporters were the great German anglophile composer George Frideric Handel and the great British painter William Hogarth, which presumably accounts for the fact that the Foundling Hospital, as it was then called, was not only Britain’s first children’s charity but also its first public art gallery.  As already indicated, I’m not too sure of the relationship between Hospital and gallery and how they evolved over the centuries into becoming a Museum, suffice to say that the current building contains displays of historical artefacts and paintings plus a small Handel archive.  In addition to these permanent features, there is also now a temporary display of artworks from sixty contemporary artists all co-ordinated by Cornelia Parker.  The selection is a bit of a mixed bunch and whether Parker gave her fellow creatives any particular brief as to what they should submit for inclusion in her show, other than perhaps telling them that the title of the exhibition is Found, is not clear.  There are a few straightforward prints, paintings and sculptures but the vast majority of the works here probably fit into a broad, general category that could reasonably be described as being run of the mill, Conceptualist jeux d’esprit, of the type that Parker herself has spent a large part of her career constructing.  There Must be Some Kind of Way Out of Here, a fairly typical example of her work starts the show.  Basically, the piece consists of wall-mounted chunks from a dismantled wooden staircase given significance and turned into a precious artistic reliquary by the fact that the steps were once part of the fixtures of a flat rented by the guitarist superstar Jimi Hendrix.  Those of a certain generation will almost certainly recognise that the title of the artwork is the opening lyric from one of his songs and whether you find this kind of combination visual-verbal pun clever and witty or silly and trite will probably determine if you think the whole exhibition a hugely entertaining diversion or just a rather trivial waste of time.

On the other hand, if you need a few more examples to help you make up your mind well, consider the following:  Mark Wallinger’s picture of a woman on the tube who’s fallen asleep; David Shrigley’s poster pinned to a tree offering a reward for the recovery of a lost pigeon; Rachel Whiteread’s bronze casting of the discarded heel and sole from a small shoe; Heather Ackroyd & Dan Harvey’s walrus skull complete with a pair of  carved wooden tusks; and Jarvis Cocker’s glass cabinet full of old Romania Today magazines. 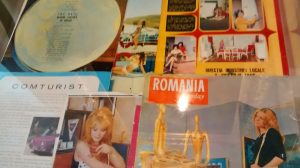 I suppose about half of the Found exhibition artworks are grouped together to form a show in the special lower ground floor Temporary Exhibition Gallery, while the remainder are displayed throughout the other floors of the Museum, intermingling with items from the historical collection, though I’m not sure that this is such a good idea.  Placing Gavin Turk’s scruffy sleeping bag sculpture underneath a collection of grand 18th century oil paintings in the Court Room, an otherwise faithful rococo recreation of one of the original meeting rooms of the Hospital, seems both inapt and inept, adding nothing to the ambience except an unwanted distraction.  Similarly, when wandering around the Introductory Gallery looking at the items on display I found it hard enough to follow the story of the Hospital’s development without needing any of the modern interventions and diversions.  Added to which, none of the Conceptual art objects here can possibly hope to compete on an emotional level when set against the ranks of the famous foundling tokens.  Mothers left these buttons, beads and other small, everyday items along with their babies as identifying markers so that, in the unlikely event circumstances changed sufficient for the parent to return and reclaim her child, they could be used to confirm the legitimacy of the relationship 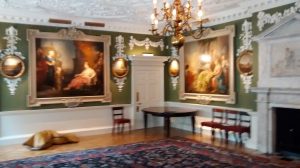 As for the Museum’s general, permanent collection of paintings which includes works by Hogarth, Gainsborough and Benjamin West, my quick impression was that amongst the grandiose portraits, the religious works designed to give moral uplift and some creaky examples of Victorian sentimental narratives, there was the usual mix of the good, the bad and the in between.  But, I confess, I was distracted by the modern stuff and wasn’t really paying too much attention to the more classical pieces and it might well be better to return for a clearer view of these in a few months when the Conceptualism has departed.

In the meantime, I decide the time is ripe to pay further homage to Hogarth, who was not just a great philanthropist and portraitist (witness his painting of Coram, the most impressive painting in the Museum’s collection) but also a great printmaker and master of the satirical narrative.  So, first I manage to ramble my way round to Russell Square station and then tube train across town to Stamford Brook and take the long walk away from the more attractive purlieus of West London and on into the ugly and very noisy junction of horrible highways that converge at the Hogarth Roundabout.  I’m not sure that it’s entirely fitting that one of Britain’s greatest artists should have his name attached to such a grimly depressing transport hub but the reason for the connection can be found a short walk away in the form of Hogarth’s House, the country home he bought in 1749 and where he lived and painted when he wanted to be surrounded by fields and free from the pressures of city life.  While there are no original paintings on view in the six small rooms open to the public, there are various items of furniture, ceramics and other household items belonging to the period that help to give some impression of what the artist’s lifestyle might have been like.  More interesting are the displays of his prints which include the famous series of The Rake’s Progress, The Harlot’s Progress and Marriage a la Mode. 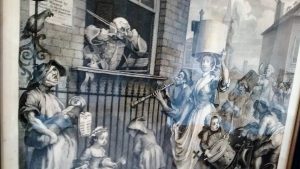 In contrast to the Foundling Museum there is no café, only a very tiny shop and no attempts have been made to shoehorn in any unrelated examples of Modern Art, all of which combine to make the place rather exceptional, charming and special.