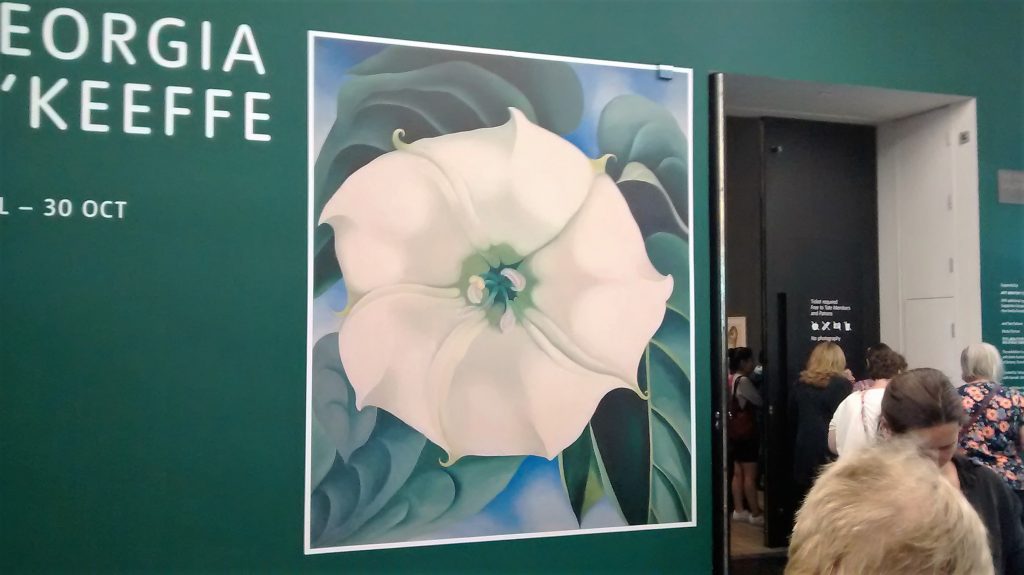 To Southwark tube station and on to Tate Modern to check out a couple of temporary exhibitions that have just opened up, and also to have another look round the new Switch House extension.  So, first off it’s up the elevators to the fourth floor of the original Boiler House part of the gallery for a retrospective of paintings by the Indian modernist artist Bhupen Khakhar (1934-2003).  I’ve no idea whether Khakhar is massively famous and widely respected back on the sub-continent but he’s certainly not a familiar name to me and it’s not all that clear as to why he’s been given the honour of having such a comprehensive, five-room display of his works.  The gallery guide advises that he ‘played a central role in modern Indian art’ and, since this is a specialist subject area of which I know absolutely nothing, I have to defer to the curator or whoever it is who writes these things and assume that the man did indeed attain some level of national importance and that his output was considered significant by those in the know.  Although, on a second reading, it does occur to me that the phrase is of such vague generality that it reminds me of the kind of fudgery that I’m forced to use when I don’t really know what I’m talking about and just want to try to bluff my way along.  I can’t help wondering how big was the Indian modern art scene in which Khakhar was swimming and whether he was a relatively big fish in a relatively small pool or vice-versa – then again, whale or minnow, ocean or puddle, maybe it doesn’t really matter. 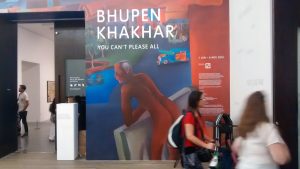 As for his paintings, well, they’re colourful figurative compositions, painted in a flat naïve style that will be familiar to anyone who’s seen work by the famous Frenchman Douanier Rousseau (which the gallery guide references) or the famous Mexican woman Frida Kahlo (which the guide doesn’t, although I think they probably share rather more similarities).  It’s clear that Khakhar, who studied art criticism before he picked up his brushes and began translating theory into practice, was well aware of Rousseau and the history of European Modernism in general.  So the fact that the artist chose to examine and record the world around him using forms and techniques borrowed from western culture – albeit with some nods to local folk art, Bollywood and the Indian miniaturist tradition – rather than try to initiate and develop a new, specifically indigenous brand, should probably be taken as quite a compliment.  On the other hand, I wonder if some of the locals thought that taking this approach made him a bit of a colonialist stooge.  At any rate, I think it’s fair to say that Khakhar learned his lessons well and applied them very successfully.  Whether it’s his generalised portraits of local tradesmen or the later scenes of a more personal, autobiographical nature, the works are well designed and structured and have a simplicity, charm and vibrancy that may be a little disingenuous but is nevertheless very appealing – certainly to a Western audience.  And it seems that during his career, sales to overseas clients were much better than those to the members of his local community.  This disparity in commercial success does perhaps add weight to the niggling thought that the artist chose to portray an India in which he’d deliberately airbrushed away some of its less appealing aspects while retaining enough of a sense of the unfamiliar and exotic to titillate a very specific, targetted clientele. 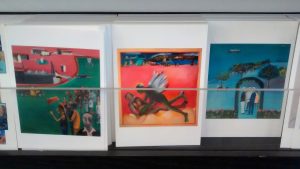 While I’m not sure that I learned anything very much about India in general or the story of the country’s art in particular from the exhibition, it’s undoubtedly a very engaging presentation by an accomplished paractitioner working in a timeless style of painting.  And whatever Khakhar’s true motivations, aims and intentions, he can certainly be congratulated on having dedicated himself to the pursuit of an artistic strategy that resulted in this very successful conclusion.

And so to the floor below where a full, 13-room retrospective of paintings by Georgia O’Keeffe (1887-1986) awaits.  Now, here is an artist with a huge international reputation whose work is very well known to anyone with any interest in the arts and who is very reasonably described in the gallery guide as,’…a foundational figure within the history of modernism in the United states.’  Unfortunately – and please stop reading now if you’re one of her many, many ferociously loyal and adoring fans – I’ve never really liked her paintings or rated her as having anything more than a very minor talent.  I realise that such a statement is artworld blasphemy but so be it, I think she can’t paint for toffees and churned out an enormous quantity of worse than mediocre daubings.  So, what’s wrong with all those early abstracts, the flower paintings, cityscapes and later desert landscapes?  Well, to me they all just look so similar and they’re all so bland and uninteresting.  There’s just not enough going on for my tastes and she always seems to be struggling with the technical side of things, having a real difficulty in making the curves and swirls, that are such an essential part of her repertoire, look convincing.  Presumably what some people – many, many people – find subtle and delicate and revolutionary I just find weak, insipid and dull. 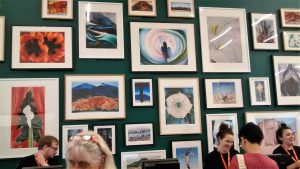 About twenty years ago the Hayward Gallery staged a large exhibition of her flower painting which was the first opportunity I’d had to see a comprehensive selection of her work.  Prior to that I’d previously only known her paintings from having seen one or two examples on show in American galleries or else through the plates in the books that always included her as a crucial character in the development of American art history.  I’d always assumed that I must have been unlucky in having seen poor, unrepresentative examples in the galleries and that the reduced reproductions were unable to convey the power that would be revealed in a proper display of original compositions.  Hence my eager visit to the Hayward in the hope of finally being convinced of the error of my ways.  Sadly, I remember exiting the exhibition with all my prejudices confirmed.  And now, having had another chance to review that decision, it’s so disappointing to have to record that, as far as I’m concerned, her work hasn’t improved at all during the intervening couple of decades.

I’m not sure there’s much point in trying to expand upon why I find her work so feeble but it has occurred that maybe she exemplifies a particular female aesthetic, from whose charms I have been rendered immune by the nature of my chromosomal construction.  I confess that I’m not up-to-date on the latest developments in feminist theory and so have no idea whether the concept of a specific female aesthetic is accepted as an absolute, a priori given, or else considered to be an outrageously outdated fascist masculine construction.  Either way, I was utterly bored by the display whereas I could clearly see that the majority of the other visitors were of another sex and another opinion, at least as far as I could judge by their intense, enthusiastic focus on all the paintings. 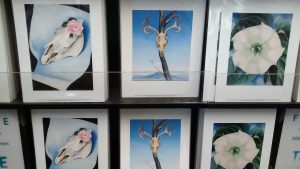 One final point is to say that I was baffled by the curator’s decision to include quite so many photographs by her partner Alfred Stieglitz plus a few by another great American snapper, Walker Evans.  Like it or not, O’Keeffe created a definitive body of work that deserves to be judged on its own merits and certainly doesn’t require any contextualisation from her male peers.

And so I head down to Level Zero, walk across the Turbine Hall and enter the Switch House, having recently realised that on my previous, inaugural visit a couple of weeks ago I managed to forget to visit this part of the new extension.  To no great surprise the display space is very much in keeping with the other bits of the building that I did manage to see before.  So, there is no very obvious route around the galleries and the art is a mish-mash of large individual commissioned artworks with the emphasis on video art along with some more vague thematic sculpture displays.  There are fewer people wandering around today in the other gallery spaces which makes the viewing experience a bit less fraught but the thematic shows still look somewhat contrived and uninspired.  Finally I decide to make my way up the stairs to the Viewing Level that I also forgot to see last time.  After reaching Level 7 I run out of puff and decide to take the lift.  But be warned, it soon becomes apparent that there is a serious logistical design problem that results in the lifts declining to stop at this, or indeed any of the other intermediate levels from 4-9.  Consequently, I’m forced to continue walking up the stairs, which is really quite an effort but one that’s definitely rewarded by making available some marvelous views of the city below.  What would enhance the experience?  Maybe a coffee and a sit down to allow my limbs to recuperate.  And, yes there’s a coffee bar…but no seats.  How strange.  I can’t help thinking that this is one of those deliberate nudge strategies that’s trying to tell me that the Tate thinks that I’m getting a bit too old to be taking part in this art world game? 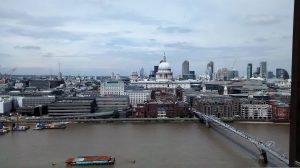