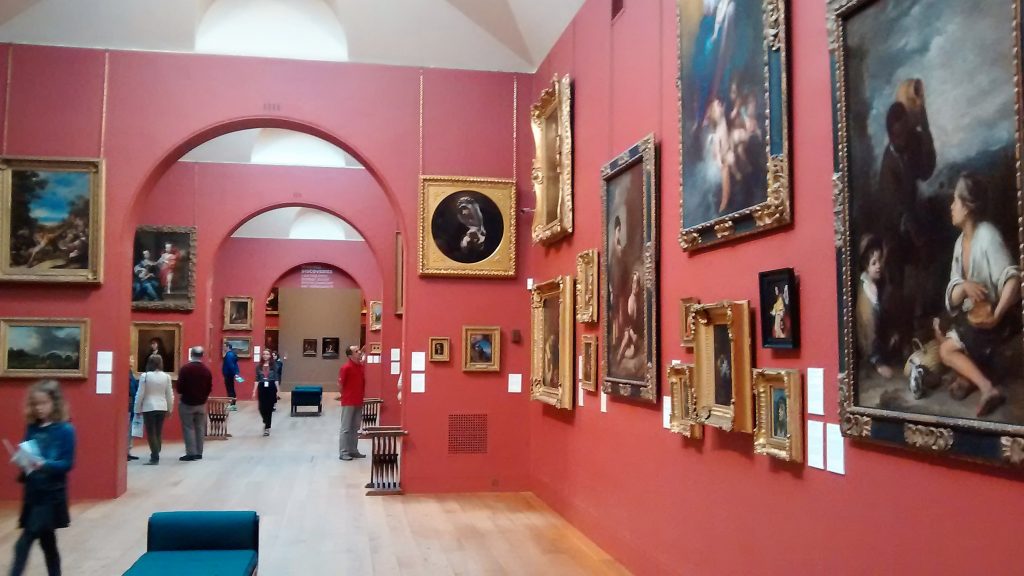 Get off the tube at Brixton which, depending on your sense of alliteration, is either just as variform in its vibrant vivacity, or chaotic in its clamorous craziness, as it always has been.  I suppose it offers both the best and worst in city life but, energizing or enervating, today it’s just a transit point for me to continue on my journey by catching an alphanumeric P4.  A quarter of an hour later, having rocked and rolled its way over a series of increasingly frequent, yet totally ineffective speed bumps, the bus reaches my stop and I get off, pausing briefly to allow the swelling contents of my stomach to settle and the severely shaken parts of my vertebrae to realign.  Having thus regained my composure I look around and find that in the space of fifteen minutes I’ve travelled back about a hundred years to a peaceful country village where the air is clear and birds chirp their cheerful songs as they happily sit on the swaying branches of the line of majestic trees and…and, for once, I’m not really exaggerating.  Welcome to Dulwich, a haven of peace and calm, of well-clipped lawns and dinky shops, and where the murmuring hum of contentment emanating from its well-heeled inhabitants coalesces like the down filling a well togged duvet, providing the kind of comfortable insulation that…well, let’s just say the place is rather more settled and a lot less manic that Brixton.

And, of course, it’s also home to the Dulwich Picture Gallery which, having first opened its doors in 1817, claims to be ‘the world’s first gallery designed to display art for the public’.  According to the Gallery’s informative information leaflet, the original group of artworks that formed the basis for its permanent collection was assembled by Noel Desenfans and Francis Bourgeois, a couple of art dealers working for Stanislaus Augustus, King of Poland.  Apparently his idea had been to create a national gallery of art but, unfortunately, before that could happen various international intrigues resulted in Stan’s reluctant abdication and the consequent scuppering of all the ambitious cultural plans he’d tried to engineer to help enlighten the compatriots of his sadly beleaguered country.  So it was that Poland’s loss got to become South London’s gain, since instead of the artworks being sold on and dispersed among the country’s country houses, they were kept together to be displayed in a public gallery specifically designed by the great architect and hoarder of eclectic ornamental artefacts Sir John Soane.  Over the years, the Gallery’s holdings have been increased through various bequests and donations while extra spaces have been added on to accommodate the enlarged collection, as well as providing space for temporary exhibitions and those modern essentials, the shop and café.  Fortunately, all the building work has been sensibly and sensitively carried out and the place retains a definite sense of its early 19th century elegance, entirely in keeping with both its historical origins and the charms of its contemporary geographical location. 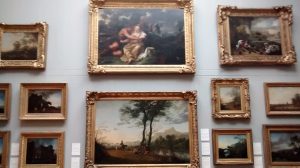 It must have been a while since my last visit here since, I have to admit, the permanent collection is much, much better than I’d remembered.  I don’t know if they’ve had a recent rehang, or found a bunch of old masters in the basement that previously weren’t on show or maybe it’s just that I’ve forgotten that my memory is not as good as I thought it used to be.  In any case, the collection is well displayed and there are a number of interesting and attractive works to engage the attention.  Ok, there are a few duffers – the colour has drained away from some of the Joshua Reynolds portraits that were presumably produced when he was messing around with his unsuccessful experiments testing out different types of paints.  And, while I’m no expert, some of the Rembrandts look so decidedly second rate that I assume he must have got someone else to paint them for him, and the Raphael is a bit on the small side.  On the other hand, it’s rather nice to have a Raphael to hang on the wall, whatever its size. 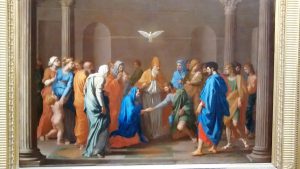 Those caveats aside, the collection fills a dozen rooms and provides a very reasonable introduction to European art from around 1600-1800 with works divided up by geographical classification.  There’s a good mix of genres covering everything from landscapes and street scenes to portraits and flower paintings, mythological scenes and religious narratives.  And so to cherry pick just a few of the highlights:  I liked the large Rubens with its typically corpulent Venus; Murillo’s untypically unwinsome flower seller; Albert Cuyp’s luminescent countryside vistas; and the room filled with paintings from Poussin’s sacramental series.  As for the home team, Peter Lely’s saucy bunch of fountain nymphs contrast rather wonderfully with both Gainsborough’s graceful rendering of the Moody family and the parochial appeal of Constable’s group of Dutch windmills. 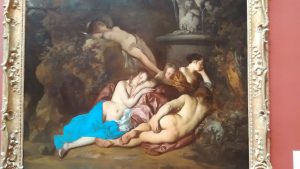 There are lots of other good things to see here from a mix of more or less familiar names and, all in all, it’s definitely worth taking a bumpy bus ride to get to see the displays but, in fact, the main purpose of my visit today is to check out the temporary show dedicated to Winifred Knights (1899-1948).  And this turns out to be rather a poignant little exhibition, not least due to the somewhat tragic brevity of her painterly career.  The display is presented in the form of a very straightforward chronological progression, starting off with a series of self-portraits and sketches of members of the artist’s family, all completed in pencil.  These are exceptionally well crafted and a glance at the accompanying labels reveals that the artist was only 16 when she was producing them.  If not quite a child prodigy, Knights was clearly a hugely gifted technician and it’s no surprise to learn that, having gained entrance to the Slade School of Art, she soon went on to win various awards and prizes.  In comparison with the confident expression of her very impressive drafting abilities, however, her painting technique initially looks a bit stilted and clumsy but then the very useful wall panel commentary suggests that this was the result of a deliberate stylistic decision on her part.  It seems that she was attempting to create a new hybrid form of painting that mixed an Early Renaissance style, typified by Piero della Francesca, with an early 20th century British Modernism exemplified by Percy Wyndham Lewis.  While I’m not entirely convinced that it was such a great idea to try to collapse the centuries and marry the efforts of these two artistic personalities together, that she managed to do it at all is certainly some kind of achievement. 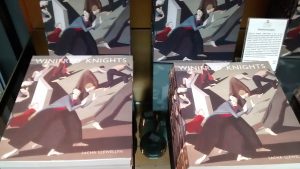 Sadly, there are just three of four examples of her full size paintings on show here, albeit that they’re surrounded by dozens of the immaculate drawings she completed as studies for the main works.  Evidently she was something of a perfectionist, devoting an inordinate amount of time to the production of her preparatory sketches and designs and this seems to have led to an increasingly slow rate of production.  Indeed, I’m not entirely sure that she even painted any more large works than those that are on display here today.  It seems that the difficulties associated with her lack of artistic output were further exacerbated by the distractions of marriage, followed by the privations caused by the advent of war and then finally the circumstances surrounding the tragic illness that preceded her early demise.

As mentioned, there’s an awkwardness and staginess about the designs of her early paintings that are perhaps more discomforting than she can have truly intended, a fact that is perhaps confirmed by her decision gradually to drop the references to Modernism as her career progressed.  The result of this choice of direction, however, means that her final painting, Scenes from the Life of St Martin of Tours, was, to all intents and purposes, just a kind of Piero parody which for me, at least, casts some doubt as to whether her incredible early promise was entirely fulfilled.  Nevertheless, the exhibition provides a fascinating insight into the life and development of a very talented artist who certainly dedicated an lot of time and effort to her chosen profession, and it’s unquestionably a terrific shame that fate acted so cruelly in denying her the opportunity to evolve her style further.