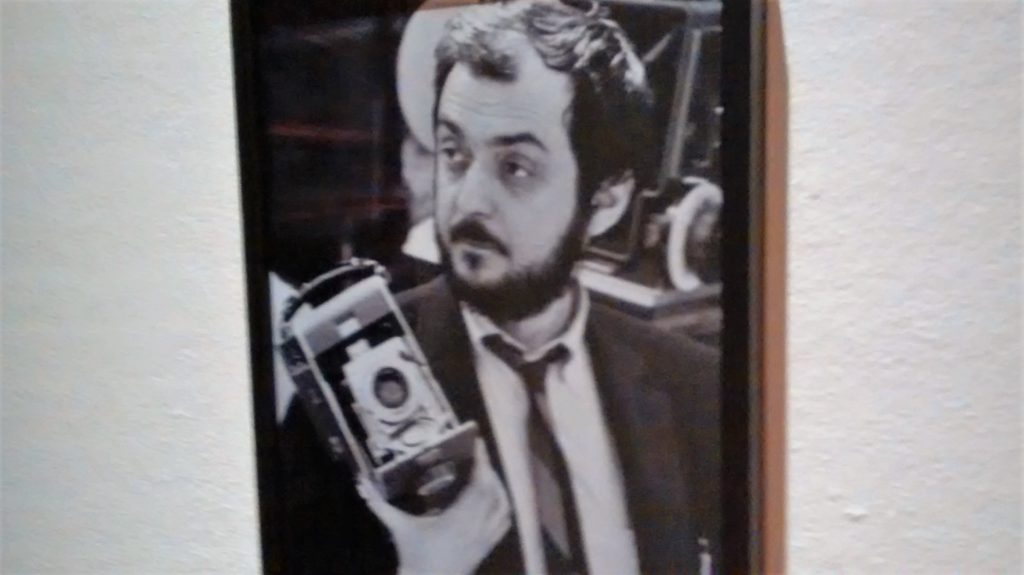 It feels like it’s time to go and have a look at the latest show at the ICA and, since it’s a pleasant sunny day and I’m not in much of a hurry, I decide to take the scenic route starting off at Green Park tube and heading down Albermarle Street.  I can’t help noticing that the front window at Connaught Brown is proudly showing off a rather nice late Kandinsky abstract which tempts me to call in to take a look at what else they’ve gathered together to put into their Summer Exhibition.  Quite a few commercial galleries stage some sort of mixed show at this time of year under a suitably seasonal title, it being a generally accepted artworld euphemism to explain that there aren’t any buyers around as they’ve all gone off on holiday and the gallery boss has decided that he may as well go and join them.  What then happens is that some junior gets left in charge and is told to have a rummage around the store room and see what unsold stock is lying about that can be hung up to make a show.  I exaggerate and, of course, I’m absolutely sure that none of that silly comic scenario applies in any way to such a prestigious and august organisation as Connaught Brown.  Notwithstanding that, their current show is indeed a hugely eclectic mix, although it’s all good quality stuff and includes an attractive Henry Moore sketch for one of his reclining sculptures; a smeary, saccharin-sweet Renoir flower painting; one of Christo’s planning diagrams for the installation of a swarm of yellow umbrellas in the Californian desert; and a sheet of Dufy character sketches revealing a talent for caricature, of which I was previously unaware. 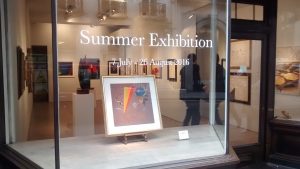 A little further up the road is Marlborough Fine Art which is offering some large collage like combinations of cloth and paint by Manolo Valdes.  Presumably the torn fabric backgrounds are intended to add a sense of quasi-bohemian edginess to the overlaying Matisse-like portrait heads but if that is indeed the intention then I think the results are all a bit too neat and contrived for it to succeed.  Upstairs in the contemporary section Grear Patterson has constructed a sort of bright and breezy installation in which a pair of deck chairs and a couple of fake plastic banana trees provide a backdrop to some fairly naïve sunny sunshine paintings of sunny sunshine scenes.  If that is just a bit too, excessively lighthearted then the antidote is just around the corner at the David Zwirner Gallery.  Stygian doesn’t quite manage to capture the total darkness of Francis Alys’ postcards from Ciudad, Mexico in which the artist has painted over the original tourist scenes with great swathes of black paint, leaving just a tiny isolated figure to walk alone or the merest streak of light to peek through.  Evidently it’s a comment of despair about the local narco-political situation and the near total redaction of hope.  The theme continues in a couple of videos, one of which shows local children playing a game of what looks like cops and robbers but perhaps it’s more likely to be a re-enactment of some internecine scene of drug gang bellicosity.  The other film returns to a more literal display of the dark with a nightscape in which a man aimlessly kicks along what looks like a flaming football.  I’m not exactly sure what metaphorical route the man is illuminating but I don’t think it’s meant to be a very optimistic one. 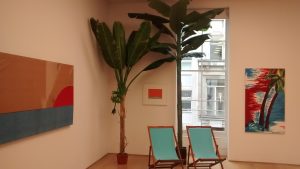 Continuing my circuitous stroll I get to Cork Street and the Angela Flowers Gallery, only to be greeted with a dour selection of gnarled portraiture courtesy of Peter Howson.  The artist seems to delight in delineating every hardworn crease and wretched wrinkle in the faces of his sitters, all of which makes the results uncomfortably convincing.  It’s easy to imagine bumping into some of these characters sitting dolefully in the backroom of a smoky, gritty pub although, to be honest, I think I prefer the introductions being made here, within the confines of a well-lit West End gallery. 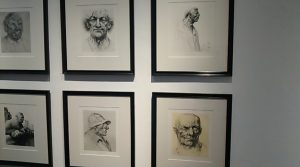 And so after all that preamble ramble I finally walk along to the ICA which has decided to give over its ground floor gallery to stage Never Again, an exhibition about the accessories designer, art director and fashion stylist Judy Blame.  I have to admit that I’d never heard of this creative powerhouse and reading his biography I can quickly see why.  Apparently he came to fame in the London’s club scene of the 1908s; was best friends with Derek Jarman and Leigh Bowery; worked on magazines like i-D and The Face; collaborated with John Galliano and Louis Vuitton; and acted as an image consultant for Boy George and Bjork.  I suppose I just have to admit that while I’m sort of aware of the existence of this parallel universe in which an excitingly groovy and desperately vital kind of fashionable milieu preens, parades and prances about, it doesn’t hold a great deal of interest for me.  I could never really see the point of just dressing up and posing, although I accept that for many people such activities obviously play a very important part in their lives.  And, of course, it’s indisputable that the wilder fringes of the fashion world, having been suitably watered down, neutered and de-fanged, tend eventually to enter the everyday world of the highstreet mainstream and so influence the sartorial styles of those of us who just aren’t very interested in such things.  Which, I suppose, is a grudging, roundabout way of saying that while I didn’t really find very much to engage my attention in any of the photographs or display cases full of source-book jumble and fashion memorabilia that have been gathered together to give an insight into the creative mind of Mr Blame, I’m sure that some people will. 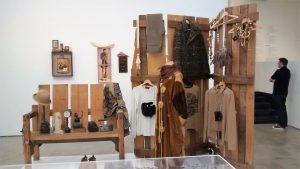 Finally I set off on the last leg of today’s hike by going down the Strand to Somerset House where fifty or so artists are paying homage in a group exhibition of works dedicated to the memory of Stanley Kubrick, one of the truly great auteur film directors.  Not only did Kubrick create some of the greatest films of the 20th century, he also came up with a stack of memorable individual scenes and shots that have achieved iconic cinematic status:  not least the insane grin on Jack Nicholson’s face as he announces, ‘Here’s Johnny’; the audacious jump-cut that hurtles us from anthropoid stone age to gravity-free space age in one great quantum leap; and the comic cowboy craziness of a US Air Force captain emitting a rodeo whoop as he rides his way to oblivion atop a nuclear warhead.  With such vivid examples of Kubrick’s visual mastery reverberating in the collective cultural memory bank, it’s no easy job for an artist to add any very useful commentary, complementary, complimentary or otherwise.  In fact, it’s not at all clear what brief the artists selected to show were given nor what exactly the curator James Lavelle was hoping to achieve.  And yet the exhibition, which consists of a warren of little rooms filled with all sorts of visual diversions and distractions proves to be surprisingly entertaining and enjoyable.  By far the most impressive of the exhibits is Toby Dye’s video which places the viewer in the central junction of four intersecting corridors down which stride a range of Kubrickian characters acting out their own quixotic scenes of mystery, tension and occasional violence.  Other artists make more or less direct allusions to the director’s films with a variety of conceptual contrivances:  so Matt Collishaw references 2001 by projecting the film of an ape onto the mask of a space suit; Gavin Turk creates a mini-maze maquette familiar from The Shining; and Peter Kennard incorporates some stills from Dr Strangelove into his familiar anti-war photomontages to emphasize their warnings about the potential threat of a nuclear armageddon.  Other artists are less direct in their responses and I’m not quite sure of the relevance of the richter-level vibrations booming out of Haroon Mirza and Anish Kapoor’s installation or the stuffed snake that Polly Morgan seems to have further stuffed into what looks like a concrete triangle. 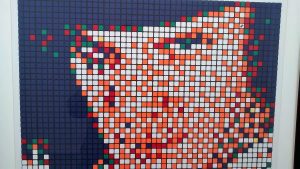 While none of the artists come very near to matching the visual flair and invention of the master himself, most of them manage to produce something interesting to look at and, if you can forgive the lapse into cinematic parlance, I think it’s fair to say that there are only a couple of B-pictures and no total turkeys.