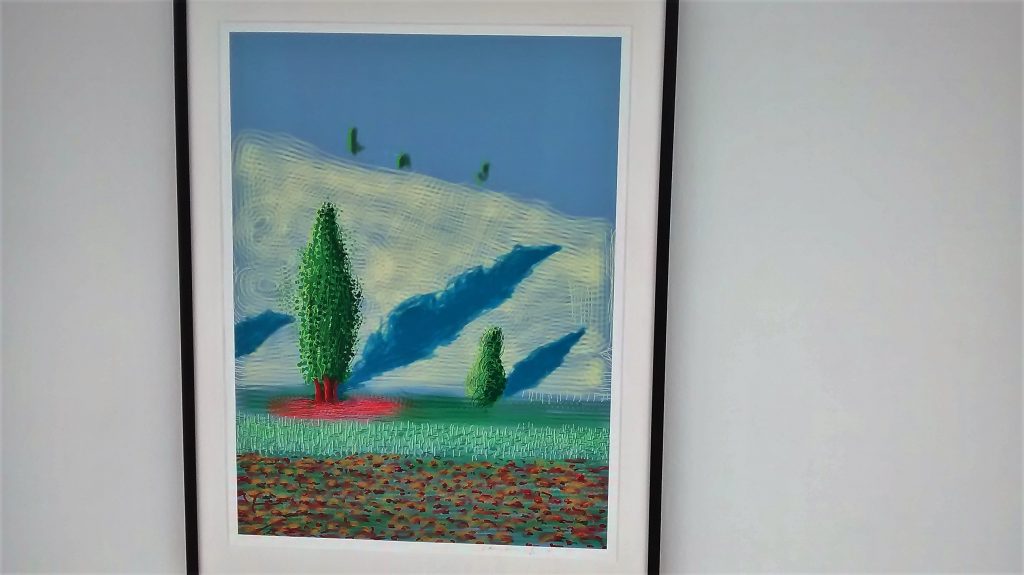 Manage to get round quite a few little commercial galleries today so there’s no time for any rambling introduction and instead it’s a brisk walk from Oxford Circus tube station barging aside the tourist crowds to get to my first stop in Dering Street.  For while David Hockney is receiving lots of generally fawning publicity for his show of portraits over at the Royal Academy – that, judging from the press shots accompanying all that fawning publicity, frankly all look a bit half-baked – the Annely Juda gallery is staging an exhibition of landscape scenes that he created on an i-Pad back in 2010.  Looking at the couple of dozen prints of various tourist spot shots from the great Yosemite National Park in California, I get the feeling that Hockney quite enjoyed trying to portray the cliffs, waterfalls and other impressive topographical aspects of the place along with all the attendant trees, shrubs and grasses.  But I can’t help thinking that he soon must have realised the limitations of his hardware and I wonder, if pressed, whether he might even be willing to admit that while most of the pictures have some appeal, and there are no absolute stinkers, neither are there are any real first division works here.  The biggest problem seems to come when he tries to convey a sense of depth and instead of the illusion of a plane gradually receding into the distance, the best Hockney and his computational power can manage is something akin to the succession of decorative scenery flats that were popular in the Victorian theatre.  So, interesting as an experiment, but the very fact that no other serious artists have decided to forgo their brushes and take up this i-Art approach to figuration confirms that technology does have its limits. 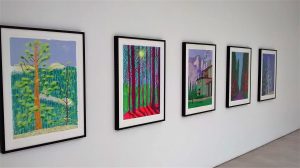 Next on the agenda is a visit to Blain Southern for an interesting historical exhibition of drawings and paintings by Carlo Carra.  Dating from around a century ago, these so-called Metaphysical works introduce a series of empty, slightly discomforting dreamscapes in which the narrative has become frozen and, frankly, nothing very much seems to be happening.  Bathers dry their hair on the beach; a boy holds a tennis racket and stares into the mid-distance; a dog sits in anticipation of his mistress getting dressed and taking him walkies:  there’s a nervous, almost comic, sense of foreboding accompanying everything that unfolds – or rather fails to unfold – mainly as a result of the apparent guileless simplicity of Carra’s painterly style.  Or, to put it another way, Carra simply lacked much technical skill when it came to moving paint around and was consequently less than ambitious when it came to selecting suitable scenes to try to reproduce.  Nevertheless, he did his best and somehow managed to achieve a rather appealing naïve style that, deliberate or otherwise, echoed the honesty of some of the Early Renaissance masters while retaining a sense of uncertainty appropriate to the contemporary political scene.  It’s a combination that has proved to be surprisingly effective and long-lasting and still manages to resonate today. 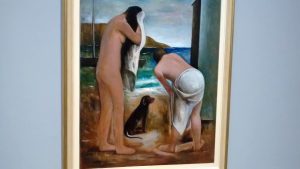 By way of contrast, Yayoi Kusama fills the Victoria Miro gallery with a sequence of vibrant abstracts.  A controlled mix of dots, dashes, lines and squiggles, I’m not convinced that these very colourful paintings are really anything more than over-sized doodles and I confess that I find the casual banality of the work all a bit otiose.  Although, apparently Time Magazine has recently included her amongst their selection of the world’s 100 most influential people.  Consequently, I suppose I should really make a bit more of an effort to succumb to her influence and try harder to appreciate her, ‘…indefatigable, paradoxical drive to expression…’ of which the gallery notes make gnomic reference. 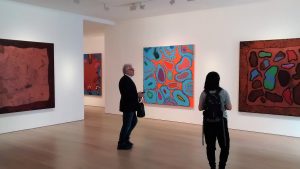 On the other hand, why bother when there are so many other much more interesting artists and designers out there all working away for our amusement and entertainment?  I definitely think I’d include Ron Arad in that category as evidenced by his current show of semi-Surrealist furniture and fittings on display at Ben Brown Fine Arts.  Tables of highly polished stainless steel interlock on the floor and then bounce their way around the gallery walls; a one-piece couch carved from a single, massive tree trunk lays immoveable on the floor; and an armchair of steel peppered with great scatter shot of holes gleams next to its alter ego, equally disfigured but this time by an inversely matching set of protuberances.  Nothing here looks to be very practical to use or comfortable to sit on but everything does look stunningly strange and if someone looked through a keyhole and saw any of it in the lounge then they’d definitely think the occupant was more than just modishly modern. 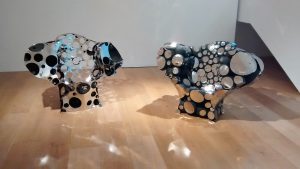 Next up is the Gimpel Fils gallery which is currently staging a display of small sculptures and reliefs by Bernard Meadows.  Most of the work comes from the mid-1950s and early 1960s and is a fairly typical mix of more or less distressed and distorted figuration that exemplifies how the artists of that era were struggling in their experimentation to find a form and language appropriate to describe the new post-war world in which they found themselves.  Like much of the art of the period, whether painting or sculpture, there’s a tendency for everything to look all a bit serious, austere and tentative which probably reflected the general mood of the country and continent that, having survived the horrors and chaos of war, had yet to reap many of the benefits expected to accompany the peace that followed.  While the intensity and integrity of Meadows and his contemporaries is clear, I’ve never found their work very appealing.  Like most baby boomers who were teenagers in the ‘60s, their work always seems to me to be too self-consciously gloomy and angst-ridden and it just never stood a chance against the exuberant, sexy, seductive surfaces appeal of the Pop Art by which it was so comprehensively superseded. 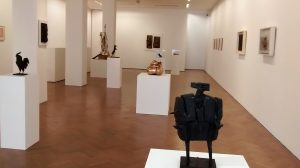 A short walk south brings me to Hamiltons for their mixed show of works from half a dozen different photographers working during the second half of the 20th century.  Entitled, Something for Everyone, it’s a promise that holds true whether one’s tastes tend to the sensual, the cerebral or the bits in between.  So, Herb Ritts’ great big glamour shot of Naomi Campbell sits between a pair of Irving Penn colour pictures of sweetly decaying poppies and roses.  But then there’s also Robert Frank’s grainy, black and white documentary shots of Parisian backstreets; a touch of Don McCullin reportage showing the local population emerging from the morning mists in Allahabad, India; and a trio of small, serene waterscapes from Tomio Seike. 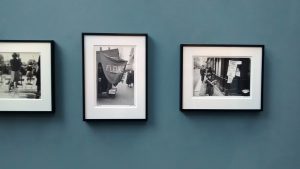 All the works at Hamiltons are hugely attractive and gazing at them induces a pleasant mood of contemplative relaxation which is why, when entering Timothy Taylor’s gallery next door, I suffer such a sudden and unpleasantly jarring jolt.  The mix of paintings and sculptures by Armen Eloyan is the visual equivalent of nails on a blackboard or a shriek of manic laughter, with the artist using a deliberately provocative style of crude, childish, cartoon simplicity to create his highly unattractive and unlikeable artworks.  But what is he trying to achieve by producing such trite and banal pieces of art, other than irritating people of taste and refinement, like myself?  Is he perhaps to try to start some kind of debate on the role of art, artist, gallery and critic in our jolly contemporary, Post-Modern society?  Maybe, but in my role as critical blogger it induces a single, solitary thought and that is to suggest that should you do decide to follow the route I took today then terminate it a paragraph early and make Hamiltons your final stop. 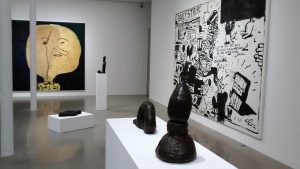