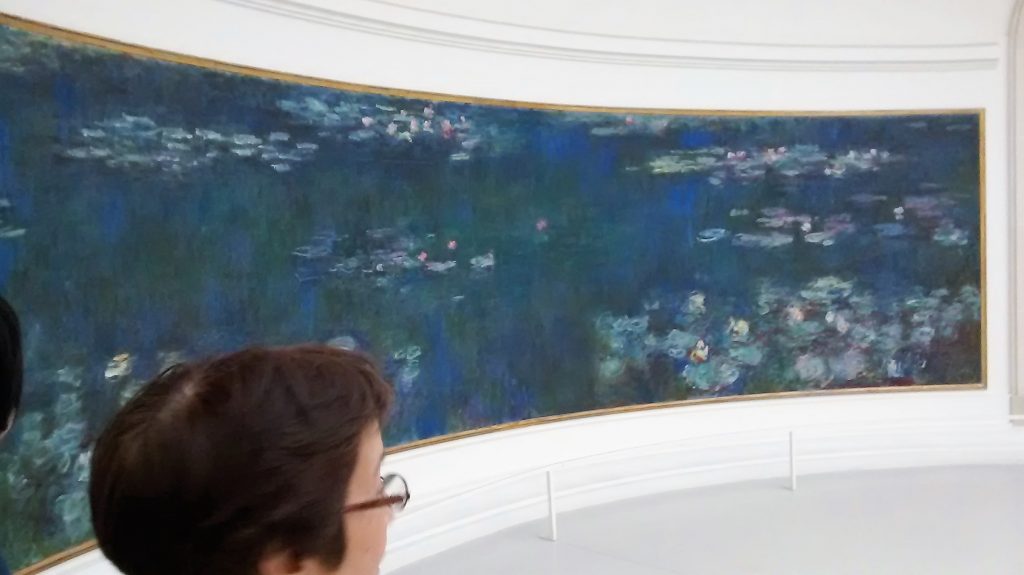 And I’m still en Paris where, thankfully, a few clouds have come out to play, making the temperature drop by a couple of degrees to a more pleasant level of bearability, as I take a morning stroll over to the 4th arrondissement to get to the Centre Pompidou.  What strikes me first about this once rather grand building is that it’s looking all just a little bit shabby from the outside, as if it could do with a good clean and polish.  Although, I suppose part of the problem, for me at least, is that I still retain the memory of the thrilling first impression I got when I paid the place a visit, not long after it had just opened, sometime back in the late 1970s.  In those days, there was just nothing like it in London – the old Tate at Millbank looked establishment dull and stuffy and the ICA, which was similarly radical, edgy and multi-media, was just so tiny by comparison.  Forty years ago the Centre looked so very big and shiny and so deliberately futuristic that I remember thinking how it was just all so absolutely fabulous and excitingly continental.  I suppose I was also a lot more youthfully optimistic at the time so, all-in-all, it’s probably not really that much of a surprise if today’s reality can’t quite match up to that rosy-coloured remembrance of a time long passed. 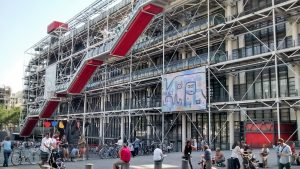 Back then, I guess I was also probably a lot more susceptible to being impressed by expressions of flashy architectural exhibitionism, whereas, looking at it now, I’m very much less convinced that Richard Rogers’ startling design was really such a clever piece of constructive creativity.  As far as I can recall, his revolutionary new idea was to update the traditional practice of trying to hide away all the servicing equipment of pipes, ducts, drains and cables behind walls and under floors and, instead, stick them onto the outer façade of the building for all to see.  I think the theory was that access would then be much easier when it came to having to upgrade these kinds of facilities at some point in the future, although I’m not sure that it ever actually worked out that way in practice.  And anyway, I’ve a feeling that the most damning practical downside that cursed the building and deterred anyone else from following Rogers’ radical lead is that instead of nice neat flat walls of stone cladding or glass that can be cleaned fairly easily and regularly, his designs result in a fiddly mix of scaffold poles and pipes and small set back windows that evidently gave Madame Mopp such a headache when it came to doing the nettoying that she simply stopped bothering.  Anyway, that’s my theory and one that I’ll have to check out when I get back home, by assessing the grubbiness or otherwise of the London Stock Exchange which was another Rogers building – perhaps the only other one – that followed this kind of silly inside-out design.

Having said all that, I’m determined not to judge the book by its cover and so determine to enter the Centre with an open mind, heading up the great diagonal escalator all the way to the fifth floor, which is currently displaying the Musee National d’Art Moderne’s permanent collection of artworks covering the period 1905-65.  Well, it’s showing off some of its holdings – I’m sure there’s a lot more stuck away in storage – but the good news is that the manner of the presentation is so very wonderfully retro and old fashioned.  The 35 interconnected rooms are laid out in a simple chronological progression showing a mix of displays that either feature the work of a specific, well-known individual artist, or else gather together paintings and sculptures from some of the different artists who were working together to propagate one of the movements that was such a characteristic of the rise of Modern Art in the first half of the 20th century.  So, for instance, Matisse, Leger and Kandinsky all get their own rooms as do Fauvism, Cubism and Dada.  Of course, dozens of important individual artists don’t get a special showing just as many of the famous styles and groups of artists go unrepresented.  So, for instance, there is no separate room devoted to Dali or Dubuffet and neither is any special feature made of Expressionism or Futurism (though possibly because these were more centered in Germany and Italy) but then there is no pretense that the display is meant to be a totally and utterly comprehensive history of every artworld phenomenon.  What this traditional mode of staging art does offer, however, is a form of common sense clarity that is a breathtakingly refreshing change from the awful clamour of contrast and dislocated disjunctures that so painfully typifies Tate Modern’s famously ridiculous thematic displays.  Wondering round those rooms means continually trying to find connections between works that are often unrelated by any geographical or chronological link.  Whereas at the Centre Pompidou, at least here on the fifth floor, it’s like walking down a familiar, well-trodden path and continually bumping into a string of familiar old friends, or flicking through the pages of a favourite, well-thumbed old art book and encountering images that have caught the attention, fascinated and been enjoyed over many, many subsequent years. 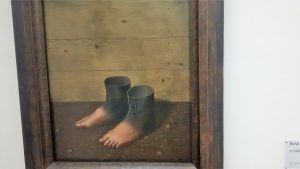 There’s something heartwarmingly comforting about being reacquainted with Magritte’s old brown boots with their human toes; or that Matisse nude with the absurd straight back; or some of the fancy brushstrokes that Braque and Picasso used when they were shattering perspective in the course of producing their Cubist still lifes; and so it goes happily on and on for another fifty or so years.  Sadly, things don’t really end all that well, at least as far as French chauvinistic pride is concerned.  And this is reflected in the rather desultory displays relating to Abstract Expressionism and Pop Art that come at the conclusion of this amble through art history.  There are a couple of paintings and silkscreens by Pollock and Warhol but they are certainly not given the space and respect that they deserve and that exhibition history normally allows them.  And what is the reason for this snub?  Well it’s hard not to think it’s because they signify that awful tragic turning point when Paris loses its premier cultural position and the capital of the global artworld forever shifts away from France and settles, at least initially, in America. 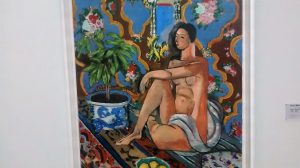 After such a wonderfully pleasant start to my visit there’s a sort of dull inevitability that what comes next – the fourth floor display of recent gifts of contemporary works – will be something of a flop.  And so it proved to be.  There are a few interesting works – a big Sean Scully abstract and some early Cindy Sherman photographs – but almost everything else is just big and boring blustering by people of whom I’ve been previously unaware and who now, having been introduced to them, will attempt to avoid in the future.  As for the two temporary shows on the sixth floor – about Paul Klee and the American Beats – I decide to give them a miss.  After trudging through the massive Tate Modern retrospective a couple of years ago I think I know the Swiss doodler well enough not to need another refresher course just yet, and not having got to know Kerouac during my teenage years I think I’ve probably left it too late now to start trying to follow him down his particular bumpy road.  So, forgoing those delights, I decide instead to treat myself to a meal in the fancy restaurant with the great view over the city.  And the food is really very good – melon and ham followed by steak and mash (no wine, just fizzy water) – if a trifle pricey, at around 80 euros! 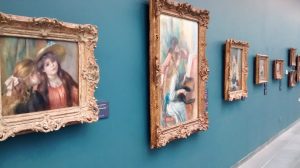 Suitably refreshed, if financially fleeced, I head off down the Rue de Rivoli to the Musee de L’Orangerie for another delightful meander amongst the delights of early French Modernism.  So, there’s a bunch of sickly sweet Renoirs; some rather gorgeous Cezannes; a room of less familiar Soutines that are full of colourful crankiness and then it’s more Matisse, Picasso, Modigliani and Derain.  So many of these artworks are just so joyously lovely to look at and, while I fully appreciate that art can have much more to offer than just providing visual balm, I’m currently meant to be on holiday.  Consequently, I’m quite happy just to enjoy the sheer optical pleasure of gazing at pretty arrangement of shapes and colours and leave concerns about art’s obligation to record the problems and discordancies of the world for my return home next week. 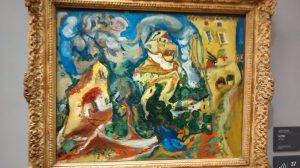 And in that frame of mind it’s time to conclude with a look at one of the true wonders of the artworld, the special rooms at the Orangerie devoted to Monet’s incredible, enormous wraparound views of scenes from his gardens at Giverney.  ‘Magnifique’ I think is probably the mot juste. 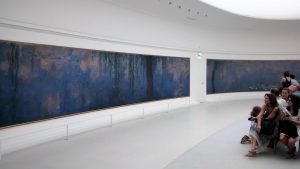