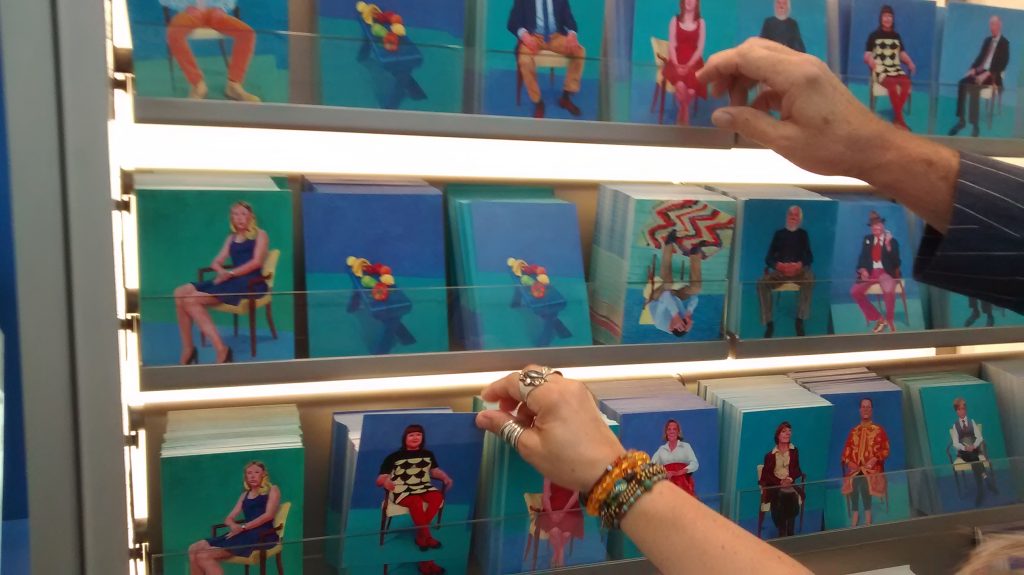 To Piccadilly tube station and then on to the Royal Academy which is still bustling with people going to see this year’s Summer Exhibition, spread over a dozen rooms of the main gallery space.  But today I sidestep that genteel mob and nip up the backstairs to get to the smaller Sackler Wing, currently given over to David Hockney for his show, 82 Portraits and 1 Still-life and it seems even busier here.  Once the radical, golden boy of the swinging sixties Pop scene, who famously dyed his hair because ‘blondes have more fun’, over the ensuing decades, Hockney has gradually gone greyer and grown grumpier during his transatlantic transition to becoming the self-exiled, grand old man of British art.  And I think it’s probably fair to say that by now he’s actually achieved that coveted status of ‘national treasure’, certainly as evidenced here by his ever-growing fan base, many of whom are currently blocking my view as I try to take a look at the latest examples of his artistic output.  A couple of years ago the Academy put on a show of his landscapes which turned out to be a hugely popular public success and presumably that prompted the idea of a reprise exercise, except that now, as the title confirms, he’s come in from the plein air and sequentially sat several dozen acquaintances on a simple wooden chair in his studio and sketched out their likenesses. 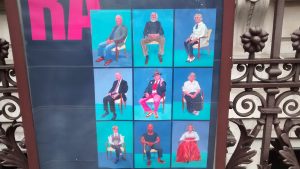 Finally the crowds part and I get a good, close-up look at the first few pictures in this parade of personages and…well, perhaps you know that strange, wonderful, warm feeling that tingles its way through your mind and body when looking at the work of a truly skillful master craftsman working at the very peak of his powers as he summons all the experiences of a long lifetime’s practice and translates the perfectly coordinated workings of eye and brain to magically transform mere pigment on canvas into a representation of living, breathing humanity?  Yes, you do?  Well, then you’ll know that it doesn’t happen very often and it most definitely doesn’t happen here today in this exhibition.  Which is a great pity.  But, sadly, it has to be said that the painting here are just not very well painted and the execution is, for want of a better word, just plain sloppy.  Anatomy is skewed throwing limbs out of proportion; the pattern and folds of the clothes are just daubed on; faces are rendered in strange shades of red and pink that resemble anything but flesh; and there is little life or expression in any of this straggling bunch of characters which are, at best, a dull series of lifeless caricatures.  I’ve never heard of most of the sitters – Bing McGilvray, Benedikt Taschen, Dagny Corcoran, Kate Pynoos, Merle Glick, Ayn Grinstein, Brad Bontems, Oona Zlamany, etc etc etc – but I assume them to be a selection of American artworld buyers, dealers and well-heeled connoisseurs. There are, however, a couple of more familiar names:  the comedian Barry Humphries and the former Royal Academy secretary and YBA promoter Norman Rosenthal although, suffice to say, if I hadn’t consulted the labels I wouldn’t have recognised either of them from the portraits here. 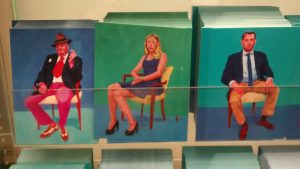 So, what is going on?  Is Hockney no longer bothered about quality control?  Is he just trying to work too fast? Is his eyesight failing?  Is he simply losing his skill with the passing of time?  Very sadly, I suppose it’s a mixture of all of these things and, worst of all, it seems that no-one has had the courage or sense to tell him.  Instead of setting out to paint a hundred bad portraits in a year, or whatever the daft task he set himself, I wish someone could perhaps suggest that next year he settles down and devotes all his energies to just trying to paint one really good work of art – concentrating on how the personality of the sitter might be reflected in their body language and etched into the lines and creases that go to composing their facial expressions, then carefully painting in the details and exorcising the errors and revising until it all comes together.  And, most important, don’t listen to any of the surrounding sycophants but try to get an honest opinion from some plain-speaking John Doe – I’m sure there must be some in America – before deciding whether it’s time to hang up the brushes or carry on and hopefully reverse out of the current terrible wrong turning and enter into a proper final phase of late career creativity that might actually afford some of the current unwarranted accolades and approbation. 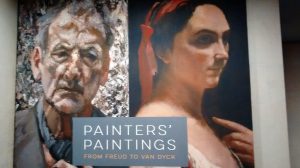 As something of an antidote to get over the Hockney disappointment I call into the National Gallery for their Painters’ Painting exhibition.  Ostensibly, this is a show designed to reveal some insights into the way artists are influenced by their peers and progenitors by picking half a dozen famous names and then showing a self-portrait; a couple of typical examples of their other works; and then some of the art they themselves actually bought for their own entertainment and edification.  And if that sounds a bit like one of those 3-in-1, meal-deal promotions from KFC or Burger King, then the exhibition does have the slightly contrived flavour of an idea cooked up by the marketing department rather than one cultivated by the usual art historians of the proper professional curatorial team.

Anyway, the exhibition starts* with a wonderful Van Dyck self-portrait that shows him in all his self-confident majesty; plus a couple of his paintings of young swells with their condescending expressions and wonderful flowing capes and shiny breeches of the kind that allows the artist to show how clever he is at rendering silk and silver.  All this is then topped off with a pair of Titians that the artist apparently bought with the well-paid proceeds of producing portraits of the rich and famous, for which he gained such rightly deserved fame and for which he was so very adept.  Next in line is Sir Joshua Reynolds who, similarly, was a master of the well-remunerated art of dashing off sketches of celebrity sitters and, while not quite as skillful as Van Dyck, nevertheless managed to fund a private collection that included works by Michelangelo (well, he thought it was one though the experts now dispute the authorship), Bellini, Posssin and his contemporary Gainsborough. 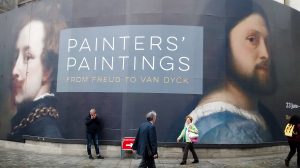 The great artistic trail continues with Leighton, Degas and Matisse amongst the owners and Corot, Ingres and Picasso amongst the owned and the theme does indeed allow for the inclusion of some great individual artworks, although, I’m not sure that grouping them together in this way helps to reveal any great revelatory aesthetic insights.  It’s hard to see that any of the artists were much influenced by any of their purchases and instead perhaps all that’s confirmed by the exhibition is that successful artists tend to have both good taste and sufficient funds to express that fact through their purchasing decisions.

The show concludes* with a big reveal that presumably explains the entire genesis of the show.  For here we have the nice juicy, messy visage of Lucien Freud standing in his studio and emerging from a background of black, white and pink smears that resemble a sheet of granite or a giant Pollock abstract.  It’s as if the artist is trying to emulate a chameleon but in fact, there’s a more mundane explanation for the similarity between the smudgey backdrop and the composition of Freud’s crinkly visage.  It seems that the artist acquired a lazy Freudian habit of cleaning his palette knife by smearing off excess paint straight onto his studio walls.  At any rate, even without going too deep into the metaphysical connotations that the ageing artist is somehow just the organised residue of the pigments left over from creating all the paintings that have preceded this one, the self-portrait is undoubtedly rather poignant in in the honesty with which the artist has decided to reveal his own bodily frailty. 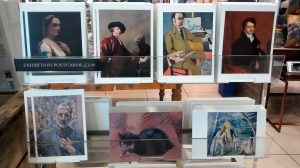 As a label makes clear, the painting has recently entered into the collection of the National Gallery having been accepted by HM Government in lieu of inheritance tax.  A further label advises that Freud always hoped that on his death, the rather attractive Corot painting of an unnamed Italian woman that he owned would also come to the Gallery, ‘…to thank Britain for giving refuge to his Jewish family in 1933.’  The poignancy of the gesture is perhaps ever so slightly offset by the decision of his executors not to bequeathe the painting directly but instead include it with the self-portrait and other items in order to reduce the artists’s tax liability.  No matter, the result was evidently to inspire the presentation of the rest of this pleasantly diverting exhibition (and only a terrible old curmudgeon would draw attention to the fact that the vast majority of the artworks in the show come from the Gallery’s permanent collection, thus making it a very easy and cheap show to put together, while still allowing for the charge a hefty entrance fee, which might seem to some just a bit bloody cheeky).

*In fact the show doesn’t start but ends here, as I realised as I was about halfway round.  It seems that Freud is meant to provide the entrance with the viewer travelling back in time to end up with Van Dyck and Titian, although I’m not sure at all what the logic is behind that particular dischronological idea.

2 responses to “3-in-1 Meal-Deal Promotions”