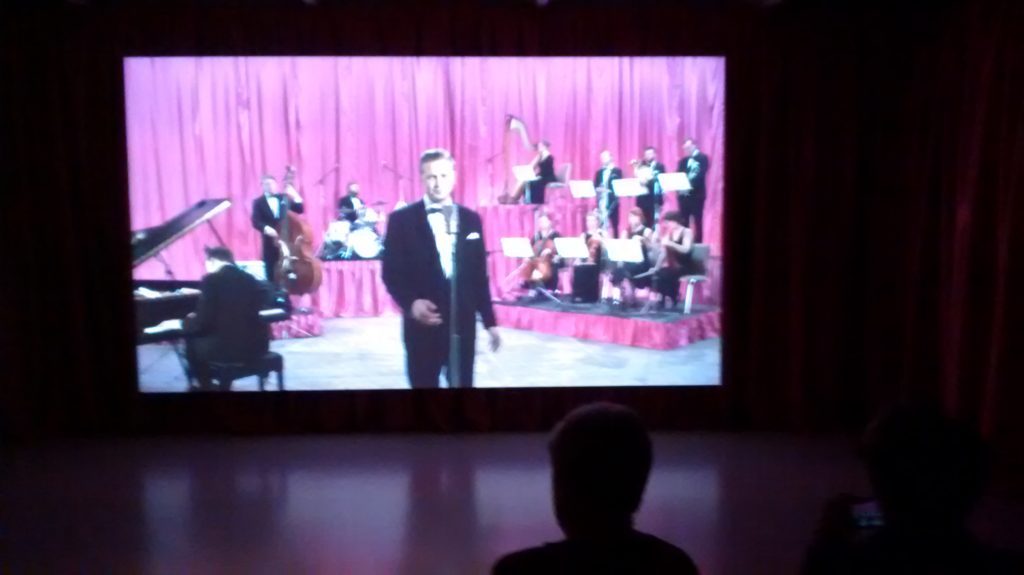 Decide to take a look at some video art today although, I have to admit, I’ve never been a great fan of the form.  Nevertheless, one has to keep an open mind on these things and shouldn’t prejudge – and maybe today I’ll see something that will be so whizzo fantastical that I’ll have a complete change of mind, recalibrate my whatsits and…well, let’s just see how the day pans out.  So, off I go, starting my walk at Marylebone tube station and heading down the road to the Lisson Gallery for their show entitled Performer/Audience/Mirror which turns out to be a sort of survey of examples of the art of video/film/moving image created during the period from the 1960s up to the present day.  And typing that last sentence makes me do the maths and note that artists have been working in what I usually think of as these very modern media, non-static/time based/off the wall formats for at least the past half century.  Ok, so it’s not very long in comparison to the 500 year reign of the traditional oil on canvas paintings started by the masters of the Italian Renaissance but, then again, it’s not all that recent a supplement to the contemporary media toolkit, considering Modern Art has only been going for about 150 years, following on from the innovations of either the French Impressionists or, for any Brexiteers, the British Pre-Raphaelites.  And moving outside the scope of the Lisson Gallery’s show, the history of artist’s involvement with film goes back at least as far as the early 1920s and Dali’s collaboration with Bunuel to create their Surrealist movies which, even today, still look quite surprisingly shocking in parts.  In fact, you could argue with such a long backstory it’s a bit surprising that there are still no generally accepted classic video artworks, at least as far as I’m aware of, and as for individual champions, I suppose Bill Viola is acknowledged as a bit of a star but I’m not sure that even he’s much of a household name. 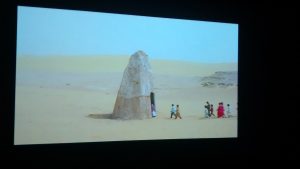 Anyway, I digress, so let’s get back to my seat on a bench in a darkened room in the Lisson Gallery, where I catch the last couple of minutes of what looks like a fairly creaky black and white documentary about the day-to-day workings of the London Stock Exchange.  Evidently this was filmed long before the so-called Big Bang went off and electronification shattered the polite world of nice, trustworthy, upper middle class men in suits bustling about trading shares and doing deals, with just a notepad and paper to record the transactions.  In normal circumstances, a film like this would be accompanied by a soundtrack explaining what was going on or else adding some kind of polemic commentary about the wonders of the free market or the curse of capitalism. But being shown in a gallery instead of featuring on World in Action, or whatever the equivalent of Newsnight was back in 1970 when John Latham shot his footage, it must be art – although it’s not very clear to me exactly what is actually very artistic about the comings and goings of the men in the suits.  Never mind, before I can ponder that particular problem up comes the next item, Wael Shawky’s Telematch Shelter which features a tall mud hut sited in an empty desert setting and into which a long line of children repeatedly enter and then, after a brief pause, exit.  After watching the performance of this ritual two or three times I checked the accompanying guide to try to determine if it was worth waiting for something else to happen.  The phrase ‘endless video loop’ suggested otherwise.  I suppose the contrast between the brightly coloured robes of the kids, the beige of the hut and the blank, endless yellow of the desert is quite pretty but had I watched the loop repeat a hundred times I really don’t think I would have gained any insights into the, ‘…relationships between gender and social class in Egypt in relation to cultural, economic and political models in place there from the 1970s to the present day’ to which the gallery guide claims it offers some kind of commentary, and about which, presumably, the artist himself is dutifully concerned.  I can’t help thinking he would have had more success explaining his case if he’d adopted the documentary style of Latham supplemented by some well-informed talking head – although I suppose then the result wouldn’t have counted as art. 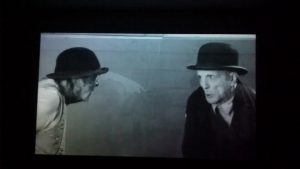 So much for the Mirror section, downstairs in the Audience part three, clunky television monitors have been placed inside a Dan Graham construction described as a griddled shoji screen (a sort of see-through Japanese wall structure).  This time I get to see the conclusion of Francis Alys’ The Nightwatch which consist of edited highlights from some National Portrait Gallery’s CCTV cameras showing a fox padding round some of its empty rooms before settling down to go to sleep on a bench under a painting.  Again, the spectacle is diverting for a couple of minutes but the plot is a bit thin and I think I’d have learned more about vulpine behaviour watching an episode of Countryfile.  And so finally to the Performer bit and this time I get Gerard Byrne’s mashed up version of Waiting for Godot, the play in which, according to the critic Vivian Mercier, nothing happens twice.  In this version I reckon that less than nothing happens even more than twice as Byrne seems to have edited a filmed version of the play and then accelerated to a speed sufficient to obliterate the actors’ speeches, and then added a voiceover which just narrates the stage directions.  Beckett was a bit of a Surrealist-cum-Absurdist so I’m not sure whether the shredding of his masterpiece would amuse or appal him.  I can’t actually here any rumbling sounds from Sam turning in his grave but, renowned as he was for his taciturnity, perhaps this shouldn’t be taken as a definite expression of approval.  Having seen his play traditionally performed a couple of times, on both occasions I found it thought provoking, mysterious, compelling, exasperating, funny in parts, and overall I suppose a fairly accurate summation of the desperate absurdity of the state of the human condition…or something like that.  Anyway, given the opportunity, I’d definitely be willing to visit the theatre and sit for another couple of hours watching and waiting alongside Vladimir and Estragon.  But once I’ve figured out the rules to Byrne’s little conceptual game it’s hard to see much point looking at his version for more than a few minutes, let alone the whole twenty minute running time. 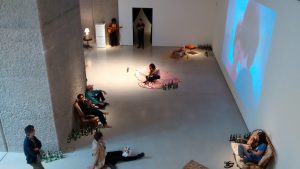 Ok, so not a great start to my video day but let’s take a jump cut straight over to the Barbican Art Gallery where Ragnar Kjartansson (he’s Icelandic) has been given the whole two floors to stage a fairly comprehensive introduction to his particular brand of performance/video/musical, multi-media experience.  Proceedings start with Take Me Here by the Dishwasher which comprises half a dozen live buskers sat and sprawled over a selection of mattresses, sofas and chairs, surrounded by empty beer bottles and all strumming away variations on the same repetitive droning bit of music while a film loop projected onto a gallery wall repeats a scene from a sort of fantasy soap opera in which a suburban housewife seduces a plumber on the floor of her kitchen.  The video bit repeats after three minutes while the musical accompaniment is structured in a cyclical way such as to last eight hours, which is certainly Wagnerian in temporal ambition even if the movie playlet is definitely at the soapy end of the operatic spectrum.  While undoubtedly quite a few leitmotifs short of a full gesamtkunstwerk, the spectacle is corny enough to hold the attention of ears and eyes for quite a few bars, and I don’t really suppose it matters very much if the guitarists all look a bit too neatly scruffy and the lounging around on the furniture rather too stagey – no-one ever seems to drink from any of the beers or smoke so much as a roll up – as to make the atmosphere appear somewhat awkwardly contrived.  Next door, through a set of very efficient soundproof curtains, is a fairly similar scene, except this time instead of the setting being louche hippy slacker ennui meets daytime TV kitsch, everything has gone decidedly upmarket.  The music, a much more classical dirge, is provided by a nontet of smartly dressed preppie performers recorded in different rooms of a swanky country house, with the entire ensemble being brought together in a cleverly co-ordinated, multiscreen video installation.  Everything looks very pretty and the music is unchallenging and harmonious enough to lull the viewer into a semi-trance-like state where time drifts happily away. 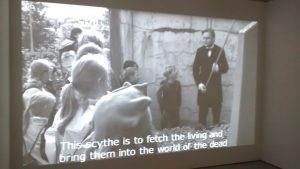 Variations on the theme are repeated, revamped, tweaked and twiddled in the remaining ten-or so rooms in the gallery.   Video production values are high and when there is an aural component, the music is universally sweet and of a repetitive nature that varies between being pleasing – a small brass band puffs and parps as they float on a canal boat in Venice – and irritating – a rock band repeats their 3-minute single over and over and over again.  When the music stops the videos are less compelling – the artist dresses up as death and scares a bunch of schoolkids in a cemetery; a man fiddles around before firing his rifle into a snowscape; the artist’s mother is recorded at yearly intervals spitting at her son. 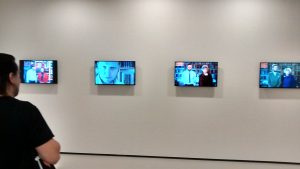 Frankly, I still have my doubts as to whether any of these productions at Lisson or Barbican – from the longer length movies to video vignettes – is intrinsically any more meaningful or magical than the equivalent amount of visual stimulation absorbed by simply slumping on a sofa channel chasing, websurfing or watching comedy cats trying to play the piano on You Tube.