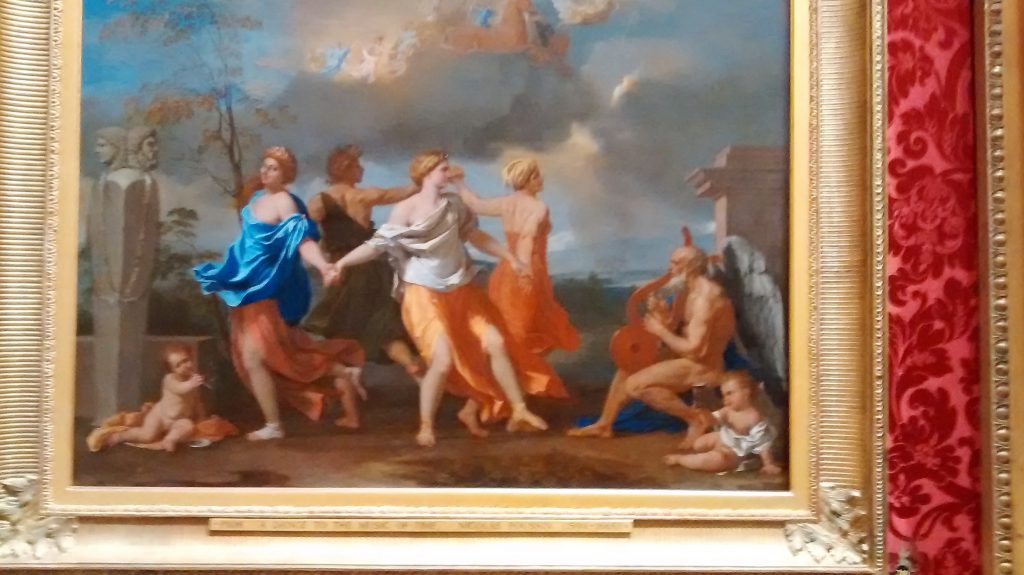 Get the tube to Bond Street station, cross over Oxford Street by Selfridges and keep heading north down Duke Street until it bumps up against Manchester Square, one of those delightfully elegant enclaves of hugely expensive residences that sit round the edges of their own very pretty private gardens.  By far the grandest of the establishments in the Square is Hertford House, former home to a succession of Marquesses of Hertford and now a permanent memorial to the extraordinary collecting habits of that peculiarly acquisitive family.  Fortunately for we commoners, the dynasty didn’t go in for any of the sneaky planning and inheritance tax dodges so favoured by today’s super rich, which means that when the line petered out with Richard Wallace, illegitimate son of the Fourth Marquess, there was no overseas trust or Panamanian shell company to leap in and liquidate the vast collection of objets d’art and other stuff accumulated during a marathon spending spree that lasted for about hundred-and-fifty years.  And consequently, it seems that Wallace’s widow, having no other heirs, decided to donate everything, house included, to the nation, with the proviso that it be known as The Wallace Collection and opened up free for the edification of the hoi polloi, amongst which, today, I am happy to include myself.

It has to be said that there’s an awful lot of stuff to see here and it’s packed together so tightly in places that it can all become a bit overwhelming.  The sheer volume of fascinating things to look at makes it really quite hard to concentrate in detail on any one item before succumbing to take a look at its neighbour and then whatever’s next to that and so on and on until everything starts to blur together and the eyes glaze over.  There’s a kind of absurd extravagance about the sheer range, breadth and depth of the Collection that reminds me of the mock newsreel near the beginning of Citizen Kane which details the ridiculously inflated inventory of the fictitious press baron’s vast collection of trophy assets.  But if the film offers us the fantasy Kane collection as a way to illustrate the vulgar excesses of the nouveaux riches and their desire to achieve respectability through the purchase of expensive chattels, the Wallace Collection is somewhat different.  Most of this Collection is stylish and refined and the pieces well chosen by a succession of aristocrats, confident of their own good taste and high position, although, having said that, there are certainly echoes of some of Kane’s ostentatious sense of display along with clear evidence of the same, near obsessional need to keep buying and hoarding. 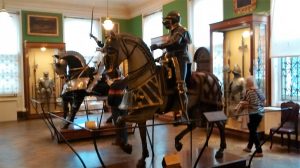 This last aspect is perhaps best illustrated by the four galleries devoted to displays of Oriental and European armoury.  Heaven for an enthusiast I’m sure, it’s not really a subject that holds much interest for me but it’s still worth taking a look at because it is so totally and utterly bizarre.  There are just so very many glass cases all full of dozen upon dozen examples of swords, knives, shields, cross bows, axes and rifles all of every shape and size conceivably possible, along with more and more examples of other savage historical implements designed to inflict maximum pain and damage on an opponent during the course of conflict.  Most spectacular of all are the rows of suits of armour and the accompanying duo of warriors all togged up in their metal gear and sitting atop a matching pair of equally heavily clad horses. 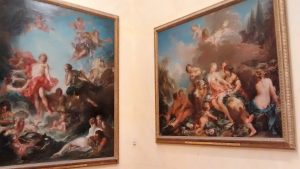 As for the art – well, in the same way that the armory contains numerous swords that are curly, strait, long, short, decorative, plain, and all the gradations in between, so it seems that when a marquess favoured a particular artist then the collecting mania took over and purchases were made in bulk.  So, on the landing at the top of the grand staircase it’s possible to see an amazing array of works by Boucher that range from his unashamed titilatory teasing fantasies, based on stories from classical mythology such as Mercury Confiding the Infant Bacchus to the Nymph, to the ever so slightly more realistic contemporary scenes involving shepherds seducing shepherdesses with their pan pipes.  While it’s easy to dismiss these paintings as trivial, insubstantial, even a tad tawdry, there’s no question that Boucher possessed an impressive technical skill.  And I have to admit that while it’s probably no longer a very fashionable stance to take, I actually quite enjoy his mindless, meaningless diversions, whether it’s the pure, or rather impure, frothy erotic decoration supplied by the pink, plump gods and goddesses lolling about in their suggestive poses or the sugary sentimentalism evinced by the more parochial exploits of the bucolic lovers. 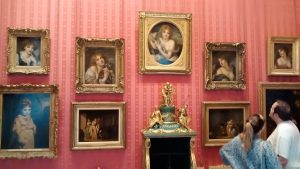 Evidently one of the Marquesses was a bit of a Francophile for the Collections holds quite a number of examples of similar lighthearted works by compatriots of Boucher like Watteau and Fragonard alongside works by less familiar names like Vernet, Greuze and Boilly.  This last group all make contribution to room full of portraits of swooning maidens, a thematic grouping that also provides another good example of how the urge to collect can evidently become a bit of a compulsion.  What seems to have happened is that having made one purchase, whether it’s a tourist scene of Venice or a full length portrait by Reynolds or a small 16th century statuette of Hercules, then the next time something similar was encountered, out came the cheque book.  The result is then one room full of Canalettos and Guardis; another room devoted to a selection of English portraiture that includes works by Gainsborough and Romney; and a whole selection of early Renaissance paintings and sculptures. 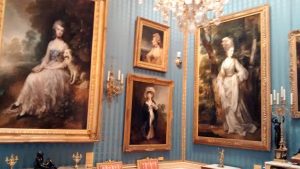 What else is there to see?  Well, lots and lots more.  If the so-called French school is probably the best represented movement in the Collection there are also rooms full of works by their darker, more serious neighbours to the north.  So, there are Dutch genre paintings by de Hooch and Steen, portraits by Rembrandt as well as all the usual examples of landscapes, seascapes and flower paintings.  Then there is the spectacular Great Gallery where Spanish paintings by Murillo and Velazquez hang alongside a transcontinental mix that includes Poussin’s Dance to the Music of Time, Hals’ Laughing Cavalier, a Rubens’ Rainbow Landscape and a highly dramatic Titian showing Perseus rescuing Andromeda from a dragon. 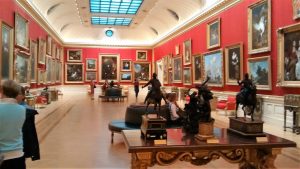 Having managed to make a quick mention of a tiny fraction of the contents of five or six rooms, there are still more than a dozen or so to cover.  At which point, I think I may as well give up any thought of providing any very thorough or comprehensive overview of the Collection, suffice to say that walking round the two floor there always seems something interesting about to appear at every turn.  I think the best advice to give anyone thinking of taking a look in at the Wallace Collection is the same that I give to first time visitors to the National Gallery, British Museum or any of London’s other large permanent collections.  Unlike their equivalents in just about every other capital city in the world, the collections of all of these places are free to enter and so rather than trying to see everything in one go it makes sense to pay shorter, repeated visits, studying a few rooms at a time in more depth.  And so, I propose to take my own sound advice, and make a return visit in the very near future to get a better handle on the layout of the whole Collection, try to start getting better acquainted with some of the second division French artists, have another, longer look at the Titians and maybe even try to develop an interest in medieval battleaxes and the like. 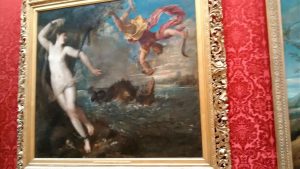