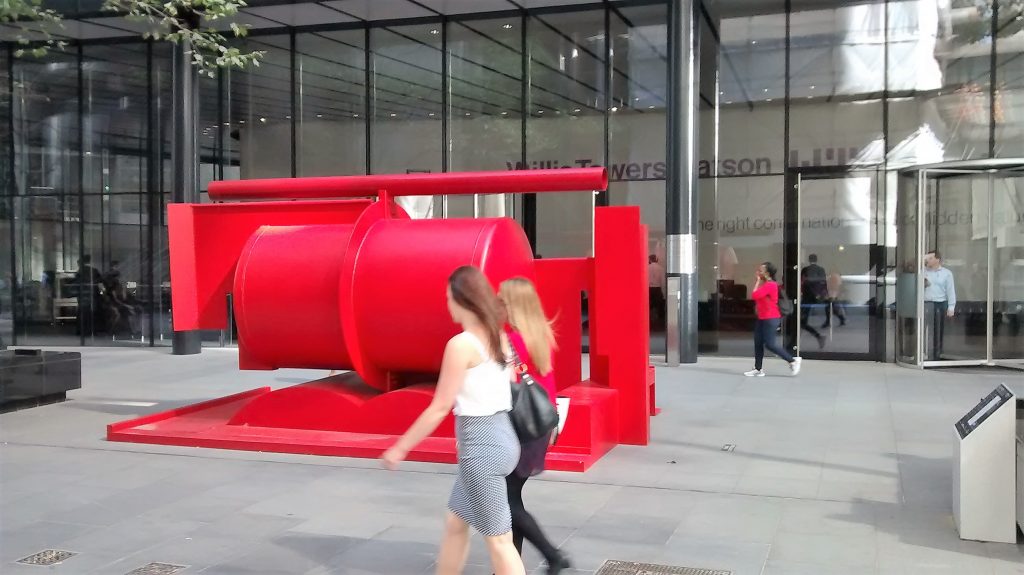 Get off the tube at Liverpool Street and find myself in the large bustling concourse area of the mainline train station.  I’ve been here quite a few times before but always have to pause and think a bit as there are exits at either end of the station and I have an annoying habit of automatically striding off towards the wrong one before slowly realising my mistake and then having to retrace my steps back to where I started off.  Anyway, today I’m trying to get to the church of St Botolph without Bishopsgate so I look up at the station signage and am temporarily tempted to walk in the direction of the arrows pointing to the Bishopsgate exit.  Fortunately, however, I trust my instincts to be mistrustful of the obvious and so, instead of heading off that way, consult my google maps machine which confirms that it is, indeed, the other Broadgate exit that’s actually nearer to my ecclesiastical destination. 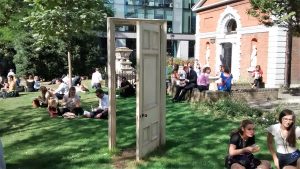 So off I go, out past the pasty shop, down Liverpool Street and into Bishopsgate where I manage to find the church without too much trouble.  Next door is its little courtyard, a small haven of greenery that is jam packed with office workers all happily sitting around in the sun eating their lunch time snacks of sandwiches, soups and sushi.  And in amongst the crowds, ignored by all who surround it, is the object of my pilgrimage, a simple free-standing metal jamb onto which is hinged a door that’s swung half open.  Yes, it’s an al fresco artwork for, once again, I’m at the start of another of those cultural orienteering missions, this time courtesy of the City of London Sculpture in the City sculpture trail.  Gavin Turk’s Ajar, to give the open door its proper title, reminds me of a Magritte painting which has a similar portal stuck in the middle of nowhere but, as far as I recall, the mordant Surrealist added a cloud that was apparently passing through the doorway, a feature that Turk omits to copy.  The idea and execution can’t quite compete with the traditional splendor of Michaelangelo, Canova or Rodin in the sculptural stakes but, as an example of today’s Conceptual art conundra, I suppose it’s a pleasant enough jeu d’esprit and I pat myself on the back for spotting the reference to Magitte.  Although, when I read the accompanying notes on the official www.cityoflondon.gov.uk/sculptureinthecity website, I realise I would have gained extra points had I also picked up the artist’s intended nod to the fact that Marcel Duchamp, the great grandfather of Conceptualism, had a special double-door installed in his flat in Paris.  And apparently I also missed Turk’s appropriation of elements from a Bugs Bunny sketch involving a similar free-standing doorframe set up designed to encourage some unsuspecting foe to enter and then fall over the edge of a cliff.  Now, I’m perfectly happy to concede that maybe I should have thought of the Duchamp tie-in but as for the cartoon rabbit connection, I don’t even think the great Nicholas Serota would have conceptualised that particular link. 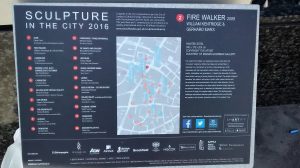 Anyway, to paraphrase another great cultural theorist, Porky Pig, ‘Th..th..th..th..that’s not all folks’, in fact it’s just the start and there are another 18 sculptures to track down on this longish winding walk around the avenues and buildings of this part of the City.  It’s a thought that makes me start to think that maybe I picked the wrong day to go on my art hike.  It’s not just that it’s the hottest day of the year, a sweltering 30 degrees, but this part of London is frenetically busy and noisy and every time I stop to try to look at a bit of art there are a million busy people all racing off in every direction eager to get to somewhere else and frowning at me because I’m dawdling a bit and not walking as determinedly as they all are.  OK, not everyone is going places but even the stationary ones standing outside their buildings are exercising their lungs almost as energetically by puffing furiously on cigarettes and so contributing to the other polluting elements emitted by the taxis and buses and other, idling traffic.

Adding to the general sense of controlled chaos and clamour there also seems to be an awful lot of construction work going on with cranes clanking, cement mixer lorries chugging and steam hammers thudding, all of which combines to make a cacophonous background soundtrack for an excessively energetic city symphony.  In retrospect, I shouldn’t have picked a working day to do the walk for, as those familiar with this whirring financial hub will know, the area undergoes an extraordinary metamorphosis during the weekend, transforming itself into an absolute ghost town with tumbleweeds blowing down the empty streets and the eerie silence disturbed only by the occasional gentle whistling of the wind.  It would have made the whole exercise a lot easier and more pleasant to tour round on a Sunday but, no matter, I’ll just have to put up with the inanimate distractions and try not to bump into too many of the local city slickers.  And that’s another very specifi, discomforting characteristic of this part of town – everyone looks not just super-busy and focused but also frighteningly tall, smart, tanned, manicured, coiffured, expensively dressed and generally well-groomed.  Frankly, it’s a wonder somebody doesn’t call security and eject me for ambling along too slowly and then add on a fine for the crime of wearing M&S within the confines of the Square Mile. 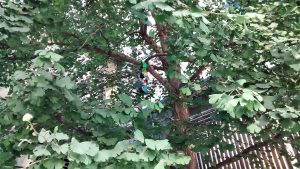 Enough of the cutting social commentary, I’m sure I can leave it to Jeremy Corbyn to sort it all out in due course.  In the meantime, back to the art and rather than list all the individual items (which can be found on the website address above) I think this time I’ll just pick out a few of the more noteworthy ones, starting off with Lizi Sanchez’s small sections of multi-coloured paper chains that are hung over some of the trees along the route.  They’re not easy to spot which, I suppose, makes it all the more pleasing when, having looked around and about for a while, they suddenly come into focus.  They present such a very tiny visual distraction amongst all the noise and action going on around them that there’s something almost heroic about the utter simplicity of their structure.  Rather more noticeable and solid are a pair of enormous shiny gold marrows that Sarah Lucas has dumped outside the entrance to some great glass office building.  I have to admit that at first sight – knowing that Lucas has a well-deserved reputation for artistic vulgarity – I thought they looked like a couple of massive turds and were thus some kind of negative comment directed towards the capitalistic speculators and wheeler-dealers that inhabit this part of town.  Then, at second sight I thought maybe they were courgettes or some other kind of squash and that it was a kind of verbal punning related to the nearby Gherkin building, the glass tower that has acquired that nickname as it rises like a…, well, like a sort of vegetable, up into the skies.  Anyway, I was wrong twice and they’re just jumbo marrows, symbolising the fecundity of nature and the wonders of the cucurbit family of tasteless edible vegetables although by echoing the general shape and scale of some of Henry Moore’s famous reclining nudes it could be that Lucas is also making a little mocking dig at the occasional bumptiousness of the great British sculptor and his penchant for sticking works outside office buildings around the world. 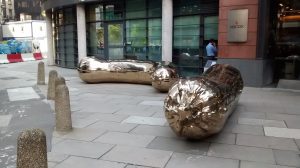 Finally, Anthony Caro’s great abstracted lump of red metal plonked outside another massive glass and metal building deserves a bit of a mention, if only because it seems to me to be so obviously sited in the wrong place.  It’s a huge, weighty piece of art that would look highly imposing and dramatic placed in any normal sized art gallery but stuck next to an enormous skyscraper in a street of other buildings of similar proportion it simply shrinks away to the size of a pimple.  It might help if it was placed in a plaza of some sort, like the Lucas work, which at least would allow for the viewer to stand back and get a better all-round view but even that option isn’t available as the buildings here are crammed together with barely room to swing a cat or whatever it is that the City folks do round here for fun.  Incidentally, as far as I could tell, absolutely no-one else was taking even the slightest side glance at any of these sculptures as they raced passed them (or leaned against them for a smoke) as they headed on to their next important money-making deal.  Which is not really very surprising but perhaps just a little bit of a shame. 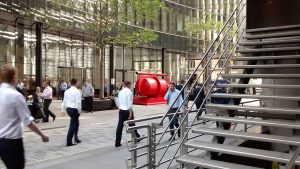 The walk passes by the Lloyds insurance building, a sort of younger brother to the Pompidou Centre in Paris.  Both designed by Richard Rogers, they share the same architectural conceit of sticking the various service ducts, pipes and conduits on the outside of the building.  A few dozen blogs ago I mentioned that the Pompidou was looking decidedly shabby and could do with a bit of a spring clean so I’m pleased to be able to report that the Lloyds building is in much better shape, looking perfectly polished and shiny and, one might almost say, perky. 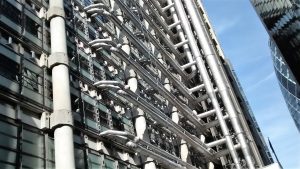 And just to pre-empt any comments about the gender balance of the artists on the trail, I note that only three of the sixteen sculptors are women which, I’m sure everyone will agree, is absolutely appalling.

One response to “The Size of a Pimple”