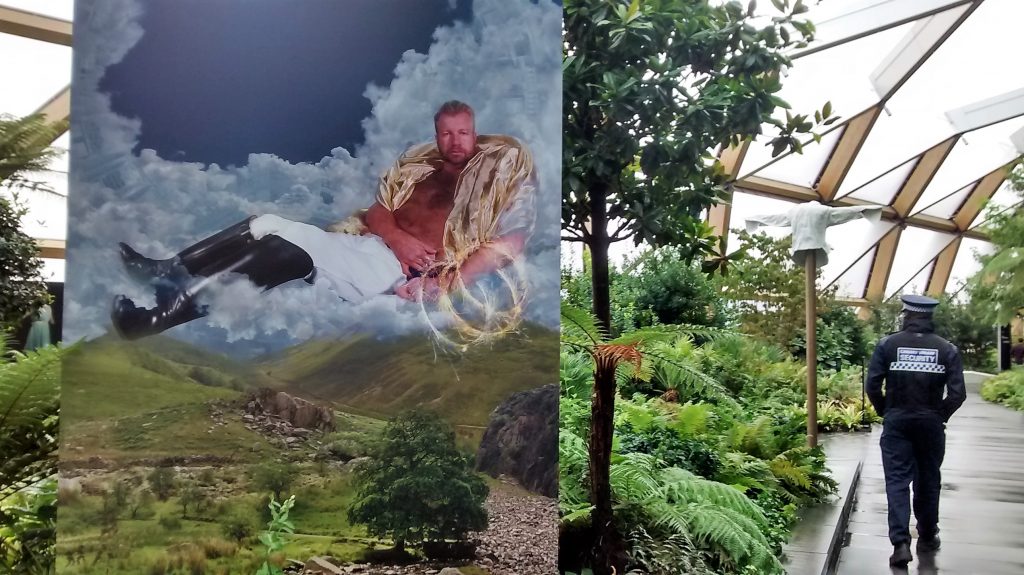 Get out at Charing Cross tube station, prompted by a tip off from one of the blog’s many loyal subscribers* that there’s a photography exhibition here that’s worth taking a look at.  Apparently, situated within the unlikely environs of the station’s subterranean warren of underpasses and small arcade of shops, resides a small display space and so, since there don’t seem to be any signs pointing out where this place might be actually be, I go for a quick exploratory wander around.  Frankly, it’s a fairly grim and grimy location and I quickly get bored going down a series of dark dead ends and decide instead to exit up the nearest set of stairs, surfacing in Trafalgar Square, where at least I can see the sunlight once again and take in a few gulps of fresh air.  Apparently the place I’m looking for is called the Magic Gallery which makes me wonder if it’s an annex to Hogwarts and that there’s a special portal known only to initiates that I need to find.  Anyway, lacking a wand to wave about, I do the next best thing and consult my google machine and, after a bit of trial and error and the incantation of a few ancient Anglo Saxon oaths, I finally discover a map that suggests I should return to the underworld via an entrance in Adelaide street.  There is a problem, however, in that this particular stairway seems to be not so much guarded by cerberus but blocked off by quite a large group of what used to be called tramps or mendicants but I suppose are now referred to as rough sleepers or homeless people with a host of complex, overlapping social needs.  While, of course, I feel every sympathy with their plight and I’m sure they’re all a good-hearted band of decent types fallen upon rough times due to the cruel vicissitudes of fate, I really don’t fancy squeezing past them to enter some dark underground space with which I’m unfamiliar.  Thankfully, there’s another, unobstructed, entrance in William IV Street so I go down here only to encounter another group of the capital’s dispossessed, although this lot don’t seem to notice me, engaged as they are in conversation with a pair of policemen.  And then, just before I get the chance to say Hey Presto, I see in front of me a warm welcoming light coming from a shop front that tells me I’ve finally found the pop-up photo boutique that I’ve been searching for. 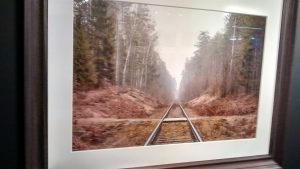 During the circumlocutory course of my opening paragraph, I think I may perhaps have conveyed the impression that the location of this cultural outlet is not quite as salubrious as the illustrious museums and swanky commercial galleries to which I usually direct the blogees who read about my rambling artworld adventures.  Well, that’s true, and the Magic Gallery is also probably smaller in scale than most of the places I visit but, having said that, there’s no doubting the quality of the two little exhibitions currently being staged herein.  Brian Griffin’s Himmelstrasse is a sequence of extraordinarily evocative photographs that shows a series of isolated railway lines each disappearing off into the vanishing point of their own perspective.  Taken at various sites deep in the forests of Poland, through which the tracks traverse, the images document routes used by the Nazis to transport people to the death camps constructed during the course of the Second World War.  It’s hard to look at the pictures now without recalling all those dreadful newsreel images of Holocaust scenes and feeling a chill shiver at the thought of the consequences that can occur when a society starts to dehumanise some of its members, whether selecting them by religion, mental state or any other perceived set of differences.  Looking out from the Gallery I can still see the police moving on the sad, dishevelled stragglers and feel discomfited at just how easy it can become to condescend and dismiss unfortunate such as these, especially when they look to be so obviously drowning in poverty and desperation. 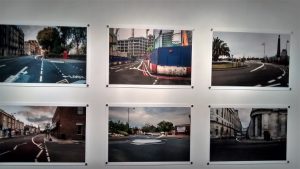 The other show at Magic, Graeme Weston’s street scenes that catalogue a series of sites of fatal bicycle accidents that have occurred in the capital over the past few years, is barely less moving and tragic.  Using special long exposure techniques, his photographs show both the places where the various collisions took place as well as the route of the final few hundred metres taken by the cyclists – these appearing as a simple, single winding trail of light that terminates each time with the same terrible abruptness.

Apparently the Gallery, which is run under the auspices of the Royal Photographic Society, will only be around for another six months at its current location before it has to move on.  Hopefully the organisation will be successful in their search to find somewhere just as central but also bigger, better and preferably more permanent, which would certainly seem warranted judging by the impressive standard of their current display. 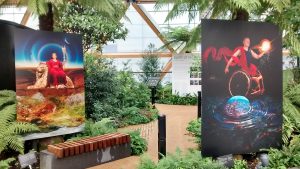 All of which leads me off on another journey across town, again as a result of a pointer coming from one of the blogsite’s other, longstanding followers.**  This time it’s over to the much more sleek and shiny environment of Canary Wharf tube station and then up the big escalators, turn right past the great big plasma screen and into the shopping mall continuing along until reaching Crossrail Place, where it’s up a couple of floors to the roof garden.  And it’s very, very pleasant here with a sort of controlled jungle of greenery sprouting away and offering a calm haven from the financial machinations going on in the great glass towers of mammon that are situated all around outside.  Currently, in amongst this oasis of verdant peace is a small display of half a dozen of Clare Newton’s portraits in which some of the nation’s leading paralympians are togged out as characters from ancient mythology.  Comparisons can be invidious but I suppose if Griffin’s photographs reminded me of some of the imagery used in the paintings of Anselm Kiefer then Newton’s style shares something of the exuberant theatricality encompassed by illustrious predecessors like Madame Yevonde and Angus McBean.  Suffice to say that amongst the deities appearing here are the wheelchair racer Tanni-Grey Thompson as Hera, draped in a red toga, holding a trident and sat on a golden lion; while the equestrian Lee Pearson seems to have retained his riding boots and jodhpurs to portray Zeus, lounging on cloud that floats high above the English countryside.  It’s all a bit daft and camp and I’m not sure that any of the portraits say very much about any of the athletes, their personalities, experiences or anything else other than a shared, good-humoured willingness to dress up and play along with the absurdist demands of the photographer. 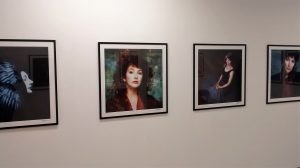 And so off to London Bridge and a walk down Bermondsey Street to get to today’s final photographic offerings at Project Space.  Guido Harari gets the downstairs gallery to show a tranche of around fifty portraits of the pop singer Kate Bush, about whom, I confess, I am not very knowledgeable.  I do recall that sometime in my youth she twirled around and screeched out a song that had something to do with Wuthering Heights but alas that’s about the sum total of my knowledge of her talents.  Although I think a couple of years ago she made some kind of career come-back, performed a few concerts and received and inordinate amount of hugely deferential press coverage.  I’m sure that there are many fans out there who will enjoy gazing at images of Kate looking pensive, or pouting, jumping in the air, waving her arms around, decked out in a hat made of feathers or just looking smart-casual but I was a bit surprised at just how little of her personality seemed to show through this rather bland selection of shots. 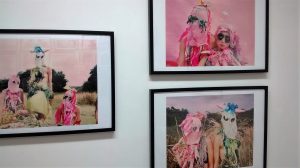 Things get a bit more interesting upstairs with Iain McKell’s Dark Side of Pink which I take to be a celebration of post-punk couture.  It’s another example of what happens when you raid the dressing up box only this time in their exuberance to get to the best bits of clobber the team of models seems to have got into a bit of a scrum and ended up shredding and generally trashing most of the bits of fabric.  Anyway, they’ve done their best to salvage the day and gamely struggled into the ripped up materials and hooded themselves in masks to hide their embarrassment, or something like that.  At least the end result makes for a colourful and diverting sort of anarchistic outdoors fashion shoot that showers off a few sparks and keeps me amused…until I step outside the gallery into a deluge of rain that I suspect signals the end of another sunny summer.

One response to “The Circumlocutory Course”