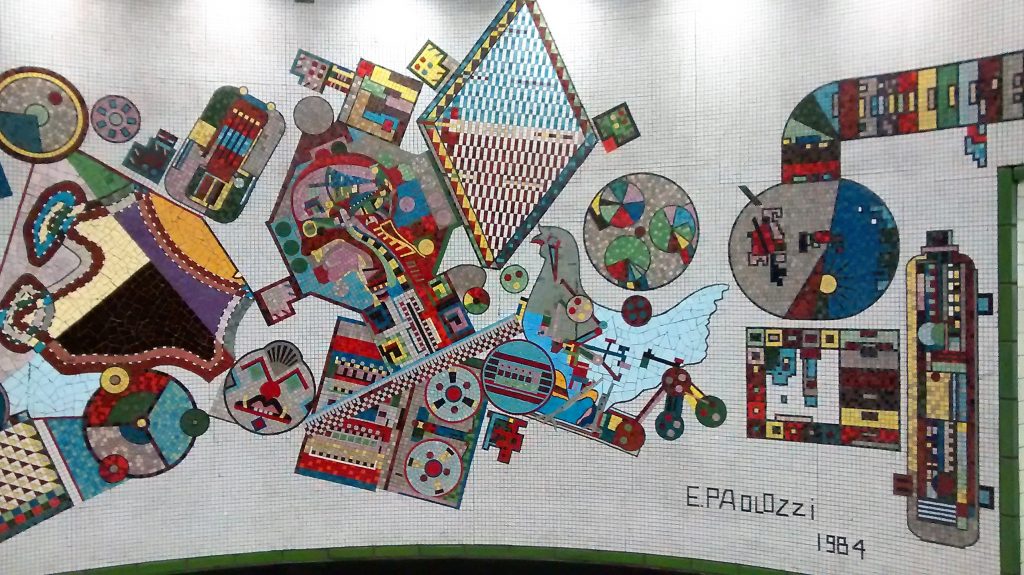 Get off at Tottenham Court Road tube station and it’s looking quite smart after its recent renovation and upgrade.  It’s especially good to see that someone has finally got out the Flash and polished up the colourful Paolozzi mosaics that decorate some of the lower platforms and walkways, although it does then make the geometric abstracts by the new escalators and entrance look decidedly bland by contrast.  When I exit there’s a busker twiddling the knobs and pressing the keys on some kind of mini-synthesizer machine, thus encouraging the emission of a weird mix of background ambient drones and assorted ornamental bleeps and beeps.  While it’s definitely an improvement on the usual Ralph McTell medleys that you tend to get in these spots, I think it may prove to be a bit too experimental for the regular mix of tourists and commuters that currently use the station. 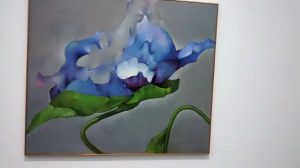 Anyway, off I go up Oxford Street and then turn into Berners Street heading for the Alison Jacques Gallery which is currently showing a small display of paintings by the late Dorothea Tanning, one of that small band of dedicated female Surrealist painters who managed to attain something of an international reputation during the course of her very long lifetime.  Probably better known for her complicated Gothic fantasies with their heavy Freudian undertones, the exhibition here concentrates on a less frantic, final series of flower paintings, not that the subject matter resembles anything you’d find coming out of Monty Don’s potting shed.  The blooms are instead all imaginary constructions that lean towards the abstract and, while on the same scale as some of the similar botanical works by Georgia O’Keeffe that filled Tate Modern not so long ago, I think that they make for a much warmer, altogether more convoluted and interesting bouquet of shapes and colours. 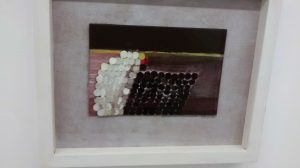 Some of the paint is applied a bit tremulously but since Carrington was in her late eighties when making these works that’s perhaps not too surprising and even if her technical facility had started to falter with age, her creative vision seems to have remained undimmed.  Of course, on occasion, the constraints of age or ill health can result in an artist being required to explore new style and techniques, a stimulus that can sometimes produce interesting results.  And such, apparently, was the case with Wilhelmina Barns-Graham who, in her early seventies, was temporarily forced to give up painting her large abstracts and downscale to experiment with smaller, more intimate collages made from paper and card.  A series of these works is now on show at Art First and although made in the 1980s they echo aspects of a sort of austere aesthetic that I tend to associate more with the immediate post-war period of British art.  Being a child of the ‘60s, I have to say that I find most of them a bit too serious for my tastes and am more attracted to the other show in the gallery of paper constructions by Jack Milroy.  Basically, Milroy plays a series of games, chopping into the pages of comics, picture books and other illustrative guides in order to liberate the images from the words and twist them into sequences of more interesting decorative arrangements.  The results are a series of intricately designed and meticulously produced works that range from the deconstructed and reconstructed front page of a Dandy comic to a fantastic 3-D flowery homage to the Douanier Rousseau. 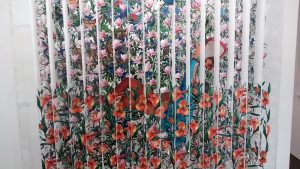 A couple of doors further down Eastcastle Street, Pilar Corrias are showing an 8-minute animated feature by Rachel Rose.  The narrative is a little confused but I think it’s a sort of ecological moral fable involving a rabbit that enters a magic forest and meets a porcupine whose quills turn into rockets and then explode.  I think maybe the lagomorphic adventure could, in fact, just be the dream of a woman stuck in a traffic jam who appears later in the film but because I entered the loop somewhere around the halfway mark – and so watched the ending followed by the beginning – I may have got that bit wrong and it could be the other way round with flopsie having the reverie.  Either way, I’m not sure it matters too much since I think we can probably all agree with its central vital message that the natural world of furry animals and grassy pastures are preferable to horrid conurbations and nasty traffic snarl ups. 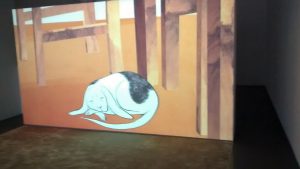 If Rose’s vision is ever so slightly simplistic then Basle Abbas and Ruanne Abou-Rahme’s multi-media installations next door at Carroll/Fletcher perhaps suffer from a problem located at the other end of the artistic spectrum.  The artistic duo fill the gallery with all manner of carefully curated items – photographs, wall texts, desks full of weeds and rocks, video films of a field trip in the countryside – as if to emulate the contents of some kind of forensic laboratory or museum display.  It all looks authoritatively complex and almost intimidating but I’ve seen enough of these kinds of displays to know it’s best to just let them wash over and get a vague feeling for what’s going on rather than getting suckered into trying to decode the precise clues and tease out specific references in the hope that some greater insight will be revealed.  At least, that’s what I thought till I read the accompanying gallery notes about ‘today’s all pervasive imagery of crisis’ and the ‘dense story of erasures and reappearances, dispossession and resistance’ at which point I knew for sure that my approach was right. 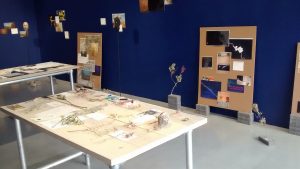 The collection of black and white video displays downstairs are a good deal less portentous, in fact, they’re downright, laugh out loud, daft.  A series of wonderfully pointless exercises in Conceptual Art acrobatics from the 1990s by John Wood and Paul Harrison that show the pair indulging in a range of absurdist choreographic games.  Located in a parallel world of nonsense somewhere between Buster Keaton and Samuel Beckett, the duos filmic performances includes finding a dozen ways of passing a large heavy wooden board between themselves, all equally awkward; holding each other upside down against a wall; cramming into a cupboard; and a range of other wonderfully silly ways to waste time which, I suppose, could be cited as one of the more rational reasons for making art. 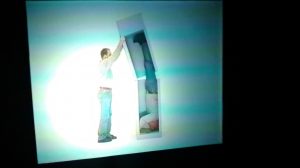 After that rarified display of artistic nonsense it’s good to move on to the end of Eastcastle Street and find a rather more down to earth exhibition at the Getty Images Gallery.  Soho takes a black and white documentary look back at the famously seedy, bohemian area of the capital from around the 1940s to the 1980s.  There are some great shots that travel from the days when shabby men shuffled along in demob suits and joined queues to get into the Windmill to watch the fan dancers; on through the edgy era of Teddy boy jive contests; and then from the new swinging age when fashion trends were started in Carnaby Street boutiques; on to its conclusion with the rise of glam rockery exemplified here by a young David Bowie strutting his stuff at the Marquee Club. 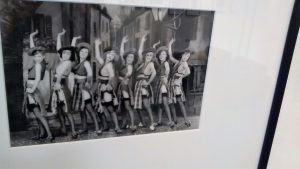 Finally it takes me a couple of tube rides to get to Knightsbridge and a short walk to reach Grace Belgravia, a women only health club which nevertheless allows men to take a look into its gallery space.  The exhibition of mixed media prints by Chila Kumari Burman provides a fitting conclusion to today’s outing since she not only shares a penchant for making colourful collages with the Tottenham Court mosaicist Eduardo Paolozzi but also, just like him, is the scion of a notable family of ice cream sellers.  On the other hand, while Paolozzi’s work showed few signs of his Scottish-Italian background, preferring instead to celebrate American pop culture and pulp fiction, Burman readily imbues most of her images with a positive sense of vibrant British-Asian biculturalism.  The result is a colourful cacophony of strikingly imagery in which tigers and deities collide with movie stars and selfies and everything is overlain with an intense decorative coating of beads, spangles and sequins, all of which provides an intensely uplifting conclusion to another day’s happy artworld rambling. 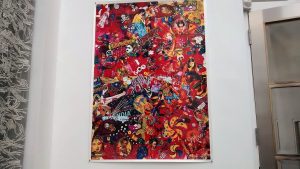 One response to “The Lagomorphic Adventure”