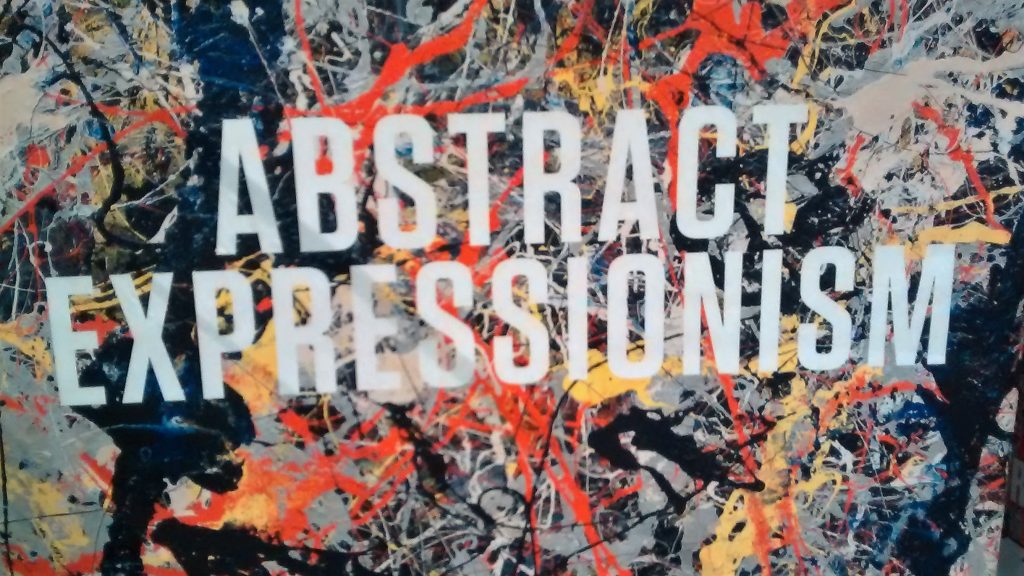 To Green Park tube station and so on to the Royal Academy which has just opened up its autumn blockbuster exhibition dedicated to the art of American Abstract Expressionism.  According to the publicity, it’s the first wide scale review of this key movement in 20th century Modern Art since a famous pair of shows held at the Tate first introduced the stylistic phenomenon to a generally sceptical British audience way back in the 1950s.  But if the Academy thought that this sixty year gap would have resulted in a massive pent up demand amongst the public for another look at this kind of art, it could be that they’ve misjudged the matter.  After all, the show has only been open a couple of days, and yet when I get to see it there are no queues for tickets and, apart from the traditional bunch-up in the very first gallery, there seem to be comparatively few people milling around in the other dozen or so rooms.  Maybe by turning up late on a Monday afternoon I’ve unwittingly picked a particularly good time to visit and that all the earlier, eager crowds have subsequently dispersed or, and I have to admit that I think it may be a more likely scenario, perhaps the simple fact is that Abstract Expressionism remains a style that’s just not all that popular with the majority of the British art-going public. 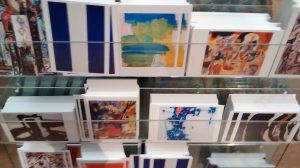 Frankly, it suits me very well when exhibition attendances are low and I don’t have to traipse round in a regimented crocodile queue or barge people out the way to get a proper look at the pictures.  Although it’s a bit ironic that today, when I can get right up close to each and every one of the paintings with ease, there’s no real need, since Abstract Expressionist art tends to be created on the large scale and usually requires the viewer to step back a few feet in order to get an overall impression of what’s going on.  And unlike a lot of figurative art, where there are usually benefits to be gained from making a close-quarters examination – whether it’s appreciating more fully the expression on a face; the technical construction of a landscape; or just getting enjoyment from picking over myriad little descriptive details – the strength of an Abstract Expressionist work comes from its general impact as it assails the senses in one big sensual hit.  That, at least, is the theory, or rather what I’ve always assumed to be the theory.  And maybe I should admit at this point that, having seen quite a lot of examples of this type of art, though never before laid out in such an impressively comprehensive survey, I’ve seldom, if ever, experienced the kind of emotional punch or great sensual experience of which I sort of think that I’m meant to have been the grateful recipient.  Of course, I’m perfectly willing to accept that the fault is entirely mine and that some unfortunate psychological trauma has probably twisted the neural network in my cerebral cortex into such a bruised state that I lack the sensibility, sensitivity, or whatever else is required to be able to appropriately appreciate the full wonderful spectrum of sensations emanating from these kinds of artworks.  On the other hand, maybe the lack of crowds here today suggest that it’s not just me who has difficulty with Abstract Expressionism and flounders in the gap between the expectation of experiencing wonderment, joy and a host of other sensations, and the less exciting range of responses actually felt when stood in front of one of these massive expanses of canvas and colour. 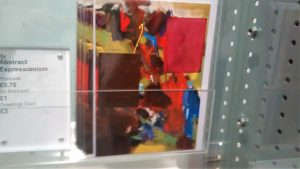 Having said all that, anyone interested in Modern Art should certainly pay a visit to the exhibition since it’s a pretty thorough examination of the movement with substantial selections of works from all the main stars of the style.  And whatever one thinks of any of the individual artists and the paintings they created, the movement as a whole was undeniably of tremendous historical importance, having a profound effect on the development of Modern Art in the post-war world.  Most important perhaps was the fact that it heralded the cataclysmic tectonic shift that moved the world’s innovative cultural heart from Europe in general, and France in particular, over to America in general, and New York in particular. 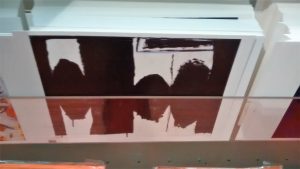 I suppose that the basic historical reasons for the cause of this geographical realignment are fairly obvious when one considers the hugely different states of the two continent’s economies and infrastructure at the close of a decade of political turmoil and international armed conflict.  But as to why the New World art renaissance took the abstracted form that it did, well, maybe that follows a more parochial logic.  When Germany invaded France, Picasso and Matisse, the two great titans of the modernist figurative tradition, both decided against going into exile and instead retreated to their respective studios to continue with their experimental investigations into forms and colouration.  By contrast, the great Dadaist Duchamp, along with his Surrealist colleagues Breton and Ernst, relocated to the safety of the United States, smuggling in with them a host of subversive artistic concepts including the idea of so-called automatic writing.  This favourite technique of the literary section of the Surrealist movement allowed writers to produce screeds of absurdist texts that apparently came direct from the subconscious, unedited by any rational interventions of logic, taste or other forms of aesthetic discernment.  It was an idea that evidently appealed to Jackson Pollock who found he could apply a similar uninhibited principal to painting, by laying his canvases on the floor and then splashing down his paints using his famous drip technique.  The point being that this method of making art appear from a sort of loosely directed mix of semi-random marks, could potentially tap straight into the artist’s inner emotional core. 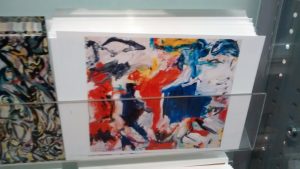 A viewer looking at one of Monet’s large late paintings of his lily ponds at Giverny might be able to discern the light rippling on the water and the shapes of the flowers as they floated along, and imagine being stood in the great Impressionist’s garden and thinking how lovely was the ambience and atmosphere.  But, according to Pollock and his compatriots, that feeling of calm and wonderment could be accessed directly without the need for representations of the pond, the plants or any other figurative aspects.  Indeed, a suitable arrangement of abstract colours and shapes produced through the spontaneous, gestural actions of the artist should be able to activate the same cerebral sparks and perform the same trick of provoking an emotional response in the viewer but in a more pure and direct manner. 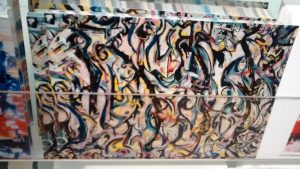 Again, that’s the theoretical base and there’s no doubting that the two largest Pollock murals in this show really are very impressive, very beautiful and even exhilarating, abstract constructions.  Though I still question whether by looking at these works I’m really communing directly in some exact shared empathetic state with the departed sprit of the sadly tormented artist himself.  Anyway, as far as I’m concerned, there are very few other works in the show that are anywhere near as interesting or stylish as these two absolute corkers.  Most of the works in the rest of the exhibition are moderately interesting and occasionally quite pretty but, for me, few manage to evoke anything much more than the slightest twinge of an emotional charge.

Best of the rest were the Gorkys and early de Koonings, where there are still small traces of figuration or the suggestion of biomorphic shapes in amongst all the random streaks and splashes of colour.  Most disappointing were the Rothkos.  I usually tend to quite like his familiar pairings of fuzzy, blurry patches of soft warm tones but, for some reason – maybe the chronic chromatic overload from all the other works on show – this time even his paintings looks a bit pallid and dull. 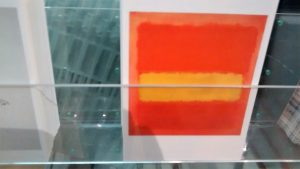 As for the rest, well it’s a matter of each to his own specific copyright stylistic tropes, whether it’s Ad Reinhardt’s monochromatic colour fields; Franz Kline’s violent gestural sweeps of black that look a bit like Japanese ideograms; Barnett Newman’s zips of one shade of colour inserted between two great megalithic blocks of another; or the Joan Mitchell’s that really do look like the work of a messy four-year-old given a box of paints and a fresh canvas and let loose to smear, smudge, scrape and squiggle as much as her uncontrolled id desires.

I have to say that for all the acreage of canvas on show here and all the gallons of paint that’s been applied with such vigour and sincerity, for me, the arrangement of colours in a small simple Cezanne still life or a Vuillard interior is capable of inducing a far more intense and satisfying emotional response.