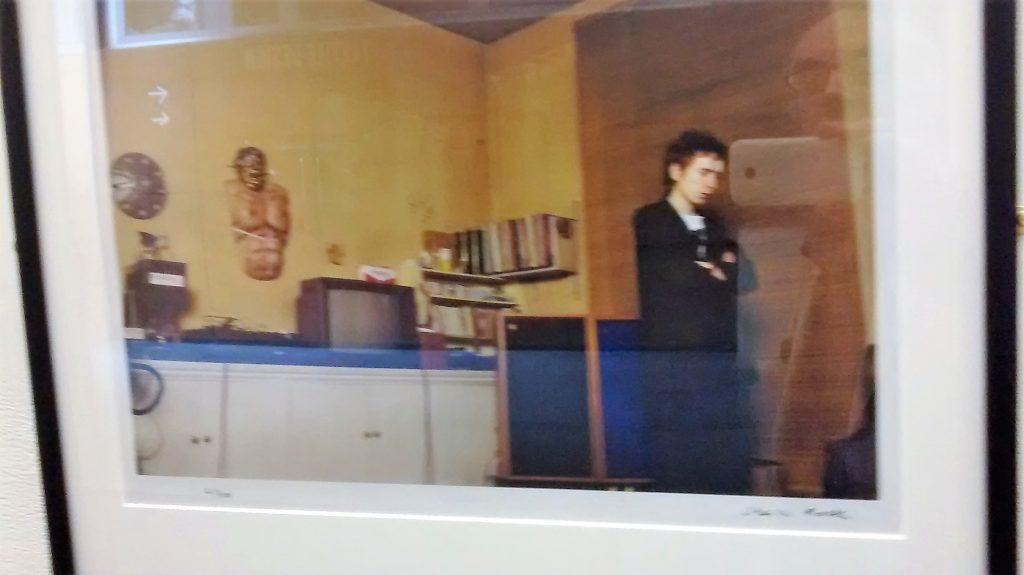 Down to Pimlico and Tate Britain to check out the displays of work from each of the four finalists currently battling it out for the honour and prestige of being the winner of this year’s Turner Prize competition.  Roughly equivalent to the Man Booker prize for books or the Big Brother trophy for brotherliness, this artworld award is now the crucial ornament required to supercharge the CV of any self-respecting mid-career artist and so boost their entry into the artistic premier league.  In the past the prize became a bit tarnished, associated as it was with the idea that the main, if not sole, intention of contemporary art was to mystify or otherwise shock the sensibilities of the great British public and their natural, common sensical tastes and opinions. Each year seemed to be accompanied by some kind of a silly contrived scandal as if the organisers had deliberately gone out of their way to choose examples of the most provocatively titillating artworks they could find, knowing that this strategy could be relied upon to generate hundreds of column inches of outraged harumphing in the pages of the mainstream media.  Thankfully, now that the Turner brand is so well established, things have calmed down a lot, the media have lost interest and the art has become more…more…well, I’ll get to what has happened to the actual art a bit later on.  In the meantime it’s probably worth taking a brief pause to refresh the memory and remind oneself what exactly the prize is meant to be all about.  In fact, the terms and conditions as to who should win the award are a bit fuzzy but basically the idea is that a jury of artworld insiders chosen by, and working under, the diligent supervision of the Tate director’s chairmanship, is meant to pick an artist who’s created ‘an outstanding exhibition or public presentation of their work’ in the previous year (with the proviso that they must be under fifty and born, living or working in Britain). 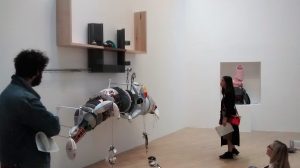 As with most previous years, I have to admit that, despite my best efforts to keep up-to-date with what’s happening in the capital’s galleries – consistently touring around exhibitions at least two or three times a week; speed-reading various art publications; and vigorously networking wherever there’s a free glass of wine to be had at any art fair, private view or exhibition launch – I still don’t recognise any of the names of the artists on this latest shortlist.  I guess I just must be going to the wrong galleries, looking at the wrong magazines and drinking with the wrong kind of people.  Although reading more carefully the little gallery leaflet that accompanies the show, I note that only one of the relevant ‘outstanding exhibitions or public presentations’ actually took place in London.  And that one was at the South London Gallery which, because it’s not near a tube station, is a bit of hassle to get to and tends to get missed off most of my weekly cultural rambles.  To have seen any of the other three specific displays for which the artists received their nominations would have involved an even more arduous, not to say hugely expensive, series of expeditions with trips to the Venice Biennale, New York’s SculptureCentre and CCA Warris in San Francisco.  Although I’m not sure that I would have even been able to locate the last of these venues, since typing the name into the google search machine produces the tiny total of 1,540 results, starting off with the web page of a Californian triage doctor, followed by a story about carbon emissions and then something to do with a British cement company – and nothing in the first three pages that has anything to do with art or exhibition venues. 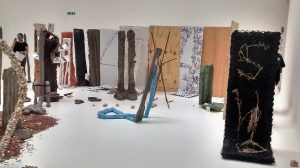 Oh well, I’m not sure that any of that really matters and I’m just hugely grateful that there are people out there who are willing to travel far beyond the inner zones of the London tube map and longhaul their way across the globe, all just to report back to we more parochial patrons how British artists are making their way on the international stage.  But what exactly are these adventurous and determined judges actually looking for during the course of their extensive overseas travels?  Well, referring once more to the little exhibition leaflet, it seems that ‘the aim (of the prize) is to celebrate and focus attention on new developments in the visual arts’.  Naturally, I’m all in favour of any kind of celebrations and as keen as the next art fan to have my attention focused on new developments but, having seen the exhibition at the Tate, I’m not sure that all those air miles clocked up by the judges have been sensibly spent.  By which I mean that I’m not at all convinced that they’ve actually managed to discover any very new developments in the visual arts.  As far as I can tell, the work of each of the four artists on display here all looks a bit run-of-the-mill, par-for-the-course, distinctly a la mode, and all rather typical of what I’ve seen, and have come to expect to be seeing, in dozens of galleries during the course of my much more mundane local travels.  That’s not to say that the work is particularly thin or uninteresting it’s just that I don’t think any of the artists, stuck as they are, tinkering at the edges of today’s favoured style of loose Conceptualism, could really be classed as particularly innovative in any meaningful way. 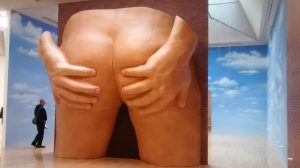 Anyway, leaving aside these minor, nit-picking grumbles, let’s get on with the ceremony.  And so, in the reverse order that tradition demands, I think that the wooden spoon should go to Helen Marten who gathers together assorted collections of random detritus – everything from fish skin and cotton buds to salt and stuffed insects – for no very discernible reason.  Although there is an oyster shell amongst all the other gubbins so maybe that’s a clue and possibly she’s decided to create a visual update of the Alice in Wonderland conversation between walrus and carpenter that used to start with shoes and ships and sealing wax. 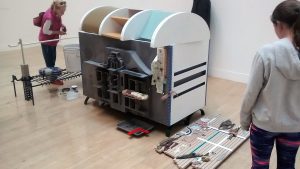 There’s a similar room full of odds and sods, bits and bobs and general clutter from bronze medal winner Michael Dean, although much of it seems to be in the form of rough plaster cast constructions that are apparently distorted letters, not that any are joined up or spell out anything so boringly elucidatory as actual words.  There’s also a great pile of penny coins evidently equating to the amount the government pays out to claimant families each week (though I’m pretty sure these days that the benefit is dispersed more sensibly by means of a bank transfer). 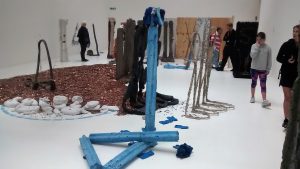 As for silver, I think that can go to Anthea Hamilton who’s papered one half of her allocated gallery space with a wall of bricks and the other with a cloudy blue London sky.  Then, inserted into the middle of the room is a giant sized pair of buttocks and what look to me to be half a dozen pairs of assorted metal underpants. 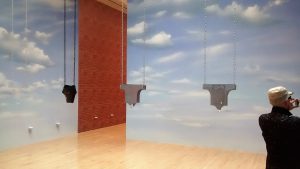 Finally, it’s gold for Josephine Pryde and her series of photographs of hands involved in such manual labour as holding a notebook or tapping on a mobile phone, along with her tour de force, the small scale reconstruction of a diesel locomotive decorated with standard issue urban graffiti. 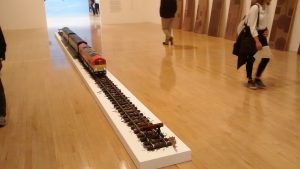 I’m not sure that these thumbnail descriptions really do the artworks full credit and so if you, or indeed the proper panel of experts who actually determine the prizewinner, disagree with any of my placings then I’d be happy to reconfigure my list as, frankly, I don’t really think that there’s much to choose between any of the installations here.  All the works are moderately interesting accumulations or transpositions of the stuff of everyday life but none strikes me as being particularly pretty or profound, diverting or disturbing. 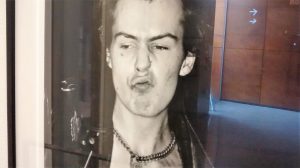 And so in need of a bit of a jolt back to reality I exit the exhibition, exit the gallery and take the short walk down the road to the Chelsea Space which is currently displaying a selection of photographs by Sheila Rock.  The more recent works here seem to be a sort of photo essay of a day out at the seaside with the pictures taken under the influence of a bit too much Diane Arbus.  Rather more striking and a lot more interesting are the shots documenting some of the bands and fans who contributed to construction of the 1980s cultural phenomenon known as Punk.  I can’t deny experiencing a sort of warm satisfying nostalgic glow looking back at the shots of Johnny Rotten, Joe Strummer, Siouxsie Sioux, Debbie Harry and their assorted acolytes, all posing, preening and exhibiting symptoms of the kind of anarchistic anti-social attitudes that made them so terribly popular with the traditional sections of the establishment.  It’s certainly much more entertaining looking at them now, well out of range of the particular brand of phlegmatic expressions of indifference and insolence that they would occasionally hurl at both supporters and detractors alike.  Best of all, however, is the appalling sneer on the face of poor old Sid Vicious, a wonderous physiognomic distortion that seemed to sum up the feelings of an entire lost generation.

2 responses to “The Wrong Kind of People”