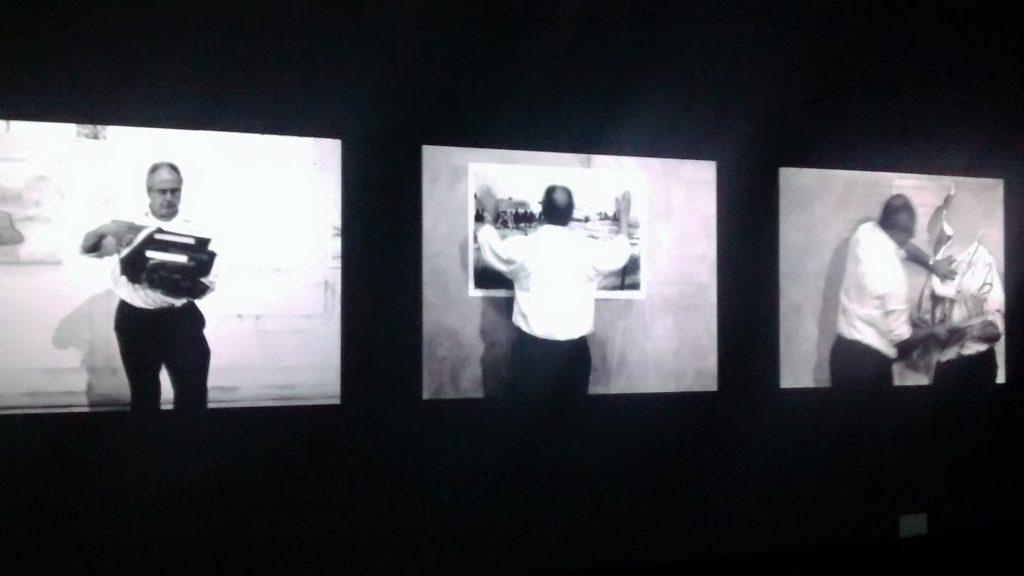 Head off to Aldgate East tube station and the Whitechapel Gallery for William Kentridge’s suite of large multimedia installations that fill both floors of the main exhibition spaces as well as the staircase that joins the two together.  All in all, it’s a very impressive display with dozens of projectors beaming out their perfectly coordinated series of endless film loops alongside various bits of automated machinery chugging away, plus a few tapestries, a room full of books to flick through and everything accompanied by a great variety of tunefully entertaining background music.  And what’s it all about?  Well, taken as a whole, I guess that moving between the different sections of the display a bit like going for a wander around the mind of the artist himself as he flits from one subject to another, doodling, daydreaming and generally playing around with a bunch of loosely interconnected themes and ideas.  And while I don’t think there are any very profound or controversial statements being made or other great insights revealed, assuming you don’t mind paying the £12 entrance charge, the overall experience is undoubtedly an untroubling and generally quite pleasantly diverting way of passing an hour or so of one’s time. 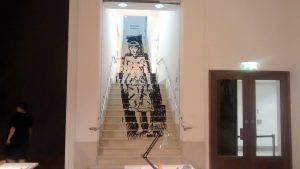 So, trying to be a bit more specific, what exactly helps constitute the merry-go-round of thoughts circulating in the mind of the artist, and into which we have been invited to peer and ponder?  Well, I suppose it’s all a bit curious, for although Kentridge is by far the most famous South African artist working today – I certainly don’t know of any other artist from that country who has anywhere near his kind of international reputation – there are few direct references made to his homeland in any of the exhibits here.  To be fair, a lot of the music in his films and animations includes the whoops and chants that, with my very limited knowledge of the matter, I think are probably typically South African, and there are fleeting appearances from some black characters.  But that’s about all.  The overwhelming interest of the artist seem to reside in a fascination with events a century ago and half a world away among the technical and historical developments of early European Modernism.  Now, I realise that were Kentridge to be a resident of, say, Canberra or Vancouver or even Bristol or Bolton rather than downtown Johannesburg, it would be totally unremarkable if he chose not to focus more directly on his local environment, and declined to draw inspiration from, or draw attention to, any particular events arising from the contemporary political and socio-economic developments that surround him.  But the last half century of South Africa’s story has been so dramatic, been filled with such symbolism and been followed by the rest of the world with such interest that it’s one of those places where it really might be helpful to be able to share the insider view of an indigenous artist.  And having witnessed all the excitement and upheavals at first hand, it would have been especially interesting to know what a thoughtful and intelligent person like Kentridge had made of it all.  I suppose maybe he considered the story to be of such a complex nature that those of us living so far away might simply be unable to appreciate fully the subtleties and nuances inherent in any artistic representations that he tried to make.  Which, I suppose, is fair enough although it’s hard not to think that here is an opportunity missed and it still strikes me as a bit strange when he so clearly has an interest in politics, albeit on a broader sweep, as expressed, for instance, through the work entitled O Sentimental Machine that closes the exhibition. 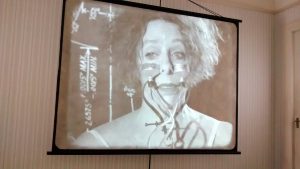 This room-sized installation comprises five films that run simultaneously, with a mix of documentary clips to the sides and a sort of pastiche silent movie scenario playing on the main centre screen, in which a secretary bashes away on her ancient manual typewriter before metamorphosing into a sort of steam-punk cyborg.  The narrative behind the ten-minute mini-story is all a bit manic, confused and absurd with some kind of subplot involving Kentridge dressed up as Leon Trotsky bellowing into an old-fashioned megaphone.  At the same time as this is going on, remixed footage of the actual revolutionary activist shows him delivering one of his lectures while gradually becoming submerged under a rising tide of water.  There seem to be a whole lot of mixed references coming in to play here linking the Russian Revolution to the godfather of Dada cabaret, Hugo Ball, and on to the Marx Brothers via the famous Groucho and Harpo mirror routine from Duck Soup, which the secretary and her ‘twin’ try to reprise.  But, in essence, the aim of Kentridge’s somewhat overelaborate efforts seems to be to blow a sort of mocking, ridiculing raspberry right in the direction of Trotskyite politics.  Maybe there’s some specific local South African connection to which the artist was alluding and of which I’m unaware, but otherwise it’s does seem a bit odd to revisit such an old story especially when there is so much else going on in contemporary South African politics.  On the other hand, maybe Kentridge was displaying an incredibly prescient insight into the nature of recent British politics and the mainstream media’s concern with the perceived entryism into the newly invigorated Labour Party. 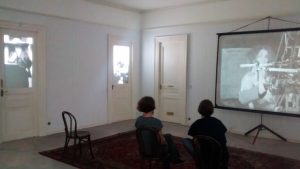 Whatever Kentridge’s precise motives, he undoubtedly went to a lot of time and effort, constructing his elaborate theatrical sets, rehearsing his actresses and also reformatting the archival records.  But then he seems to delight in playing around with this kind of complicated staging, as judged by his other large scale installations here.  These all involve a lot of very clever animation work that show Kentridge to be a hugely skillful draftsman, equally able to sketch wonderfully believable portraits and construct convincing collage characters out of simple scraps of paper.  And, of course, with the magic of stop motion animation he manages to make all these creations come to life and perform comic routines or act out little playlets for our mutual amusement.  In 7 Fragments for Georges Melies, for instance, he goes to great lengths to revive some of the simple techniques and tricks of jump-cutting and time reversal that go back to the very early days of cinematography.  And while, in comparison to today’s use of ultra-sophisticated software to create the most incredibly credible scenes of CGI wizardry, the results look a little primitive, they still retain a childish charm that can be quite beguiling.  Or maybe it’s just that having become indoctrinated by watching Tony Hart on Vision On I still get amusement from seeing the image of a landscape appear as an arm sweeps over a blank canvas; or watching as sheets of paper leap from the floor and into the hands of the artist; or looking down onto a drawing as the lines and shapes dart around the page of their own volition. 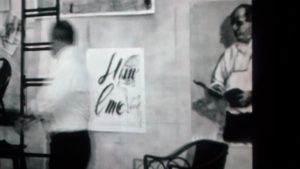 While that particular installation uses seven screens, The Refusal of Time uses five to follow a parade of silhouetted characters as they traverse the gallery walls and slowly transform from carnival band into a rag tag gang of stragglers and refugees.  The gallery guide, rather pessimistically, suggest that the symbolism used here is representative of the situation of the human condition in general.  Whereas, despite my earlier comments, I wonder if it could be a more specific reference to how the enthusiasm and optimism that greeted the end of apartheid and the initial success of Mandela’s visionary premiership went into a slow decline due to the dispiriting failures and short-sightedness of those that followed him. 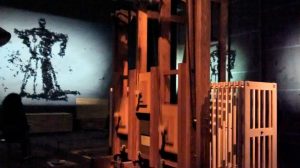 On occasion, Kentridge seems to like to try to overwhelm the viewer with almost too much to look at and so stuck in the middle of the room displaying The Refusal of Time is a so-called breathing machine, a massive pumping bellows construction that uses its mechanical pulse to counts out the passing seconds.  I suppose it adds a sort of universal heartbeat to reinforce a sense of the inexorable passage of time and the inevitable increase in entropy, or something like that, although I’m not sure it’s entirely necessary addition.  And, as far as I’m concerned, the most successful work on show here is also the simplest.  Second-Hand Reading just show a full length self-portrait perambulating his way slowly but consistently through the ever turning pages of an old encyclopedia.  The artist seems deep in contemplation, unaware of either the dancing woman who occasionally interrupts his walk of the man running after him from the other page who never quite catches him up.  It seems like rather an appropriate metaphor for all our own journeys through life and the small marks that we manage to make before the final pages come with a rush and the book closes forever, only to be filed away among the groaning shelves of that great library in the sky. 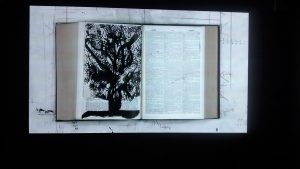