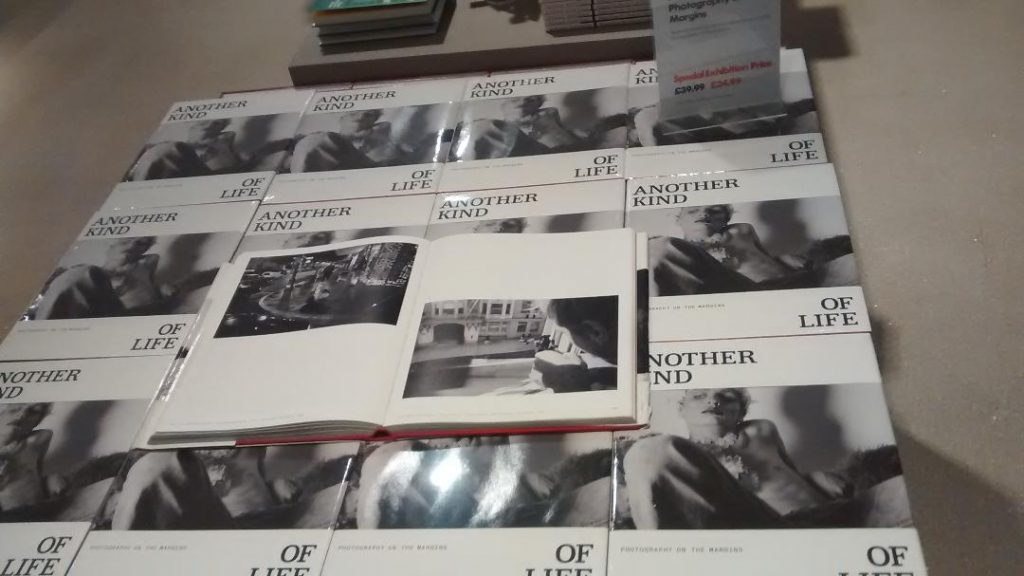 Over to Barbican station and exit out into the post-Easter gloom where the grim, gray lowering clouds seem to provide the perfect harmonic backdrop to the architectural brutality of the depressing surrounds.  Even the ripples on the paddling pool water feature and the unrelenting squirts from the fountains outside the Barbican Centre seem particularly tired today and add to the sense of melancholy that pervades the scene and seeps into the building with its determinedly dull lighting and confusing shadowy infrastructures.  Ascending in the elevator to get to the Art Gallery on the third floor, my fingers are crossed in the hope that this simple digital expression of superstitious forethought might be rewarded by some form of visual prozac analogue antidote.  But the signs are not good.  There’s no queue to get into the show and tumbleweeds are rolling their way gently down the aisles propelled along their path by the quiet onomatopoeic whoosh of an almost imperceptible breeze.  Which is one way of saying that this show doesn’t appear to be very popular, at least on the dull Tuesday morning when I decide to pay a visit. 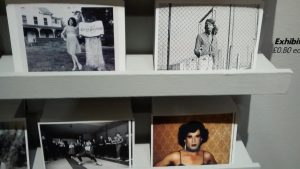 So, what is it that has so successfully kept the people away?  And is this expression of the wisdom of crowds (or rather their absence) a sound example of collective common good sense that should be followed or rather the worst kind of prejudicial groupthink that needs to be independently questioned and perhaps rejected?  Well, in answer to the first of those questions, Another Kind of Life shows the works of twenty photographers who have shared an interest in what might be called the art of social documentarianism, and, more specifically, decided to direct their efforts towards recording the lives and circumstances of members of what the curators have referred to as various ‘disenfranchised communities’.  As to who exactly is encompassed within the embrace of that final felicitous phrase, the Gallery’s explicatory wall panels propose a series of fairly upbeat euphemistic expressions such as ‘outlaws, romantic rebels, agents of change and those who flout social conventions’.  Although, to revert to a slightly more precise, not to say, demotic level of description, this means that viewers are invited to peer into the sub-cultural milieux of an assortment of prostitutes, bikers, druggies, cross-dressers, hippies, teds, rough sleepers, survivalists, midgets, eunuchs, teenage gang members and full-blown adult gangsters. 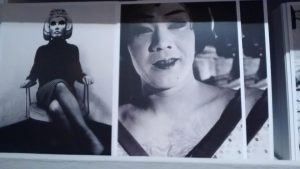 Of course, the danger of focusing one’s sights on investigating the lifestyles of members of these groups who fall into assorted minority categories is that the advocative case for society to treat the unfamiliar with empathy and understanding can becomes subsidiary to the temptation of the photographer to succumb to finding some illustrative image that stresses the differences that separate rather than the commonalities that might link and bring us all together.  Then again, it’s appears that quite a few of the subjects recorded here are entirely happy with their outsider status, not least the slightly plump Mexican jezebels simultaneously teetering on their high heels and falling out of their shimmering accoutrements as they pose against the rubble of their recently demolished nightclub haunts (as recorded by Teresa Margolles).  Similarly, the insouciant sneers of some of the teenage American causeless rebels (Philippe Chancel) echoing those of their British teddy boy confreres (Chris Steele-Perkins), suggests a combination of nervous self-confident exhibitionism also found in both the quaintly camp poses of the transvestites from Casa Susanna and the exaggeratedly tough guy stances of the Nigerian Gadawan Kura (Pieter Hugo).  Although, since these muscular African entertainers are having to use extra heavy duty chains to hold on to the muzzled, but still horribly ferocious-looking, hyenas that they use in their circus-like performances, maybe it’s understandable if their apparent bold, bravado stances mask a certain sense of trepidation. 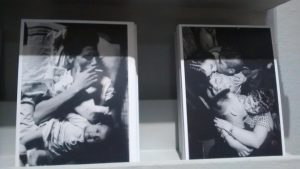 As with the rest of the photographers whose work has been chosen for this exhibition, each of the first few examples I’ve cited above have been given their own small, box-like display space to lay out what is in effect one or two small picture essays, each centered on their own particular subjects of specialist interest.  But while all are accompanied by a wall panel giving a mini-biography of the photographer and some brief generalised text describing the situation of those being photographed, it’s clear that most of the images were originally taken with the idea of them being situated within the pages of a book or magazine article, rather than displayed on the walls of an art gallery.  And so even if it’s true that some pictures are indeed worth a thousand words, others are probably best seen – and, in fact, most effectively sited – when illustrating the educative essay in a journal or colour supplement, or else expanded out to more substantial lengths and then carefully embedded within the pages of a longer, larger more in-depth publication.  As it is, I’m not sure that just offering up these brief introductory examples gives a very fair or useful representation of the technical and stylistic characteristics and abilities of any of the individual photographers, nor provides much of an opportunity for anything more than the most superficial and cursory examination of the worlds of those being documented. 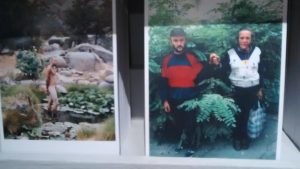 Having said all that, the exhibition starts off with half a dozen pictures taken by Diane Arbus who, I think, probably carved out a niche for herself as the patron saint (or maybe that should be the matron saint) of all things weirdly suburban, and who is perhaps more correctly classified as an artist rather than photo-journalist, which better describes all the others taking part in the exhibition.  What this means is that although the subject matter of her pictures is also all suitably quirky – the get together of some elderly midget friends, an albino sword-swallower practising her art, a heavily tattooed man showing off his picturesque decorated torso, the waitress from a nudist colony looking slightly uncomfortable with just a pinafore to protect her modesty, and so on – Arbus has very carefully framed her compositions and proffers portraits rather than what might be construed as evidence or illustration.  By contrast, I think it’s fair to say, that all the other exhibitors in the show are more concerned with trying to stress the candid authenticity of the material that goes to constitute their individual picture essays.  It’s the reason, I assume, why many of the shots are taken on the fly, unstaged or semi-staged in a way designed to confirm the truthfulness of unmediated authority.  Indeed, perhaps the most curious feature of the whole show has nothing to do with the sexual status of the Indian eunuchs (Dayanita Singh) or the nudity of the survivalist who chooses to be pictured standing ankle deep in a lily pond (Alec Soth), let alone the prostitute who looks like Andy Warhol in drag (Paz Errazuriz) or the junky searching in vain for another vein (Larry Clark), but the extraordinary similarity of presentational styles. 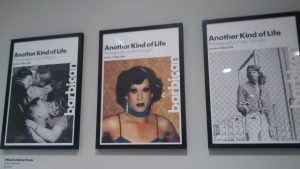 So, while there are a few examples of larger, colour shots and even the very occasional excerpt of film, the overwhelming majority of the works on display here follow the exact same format of the classic black-and-white, ten-by-eight shot that used to be the industry standard presentational portfolio image required when pitching for commercial work of any kind.  And so, inevitably, after the good, initial Arbus start, the sheer repetition of the same chiaroscuro format means that a mental blurring occurs that starts to collage everything together.  And it’s as if the monochromatic pictures of the prostitute from a Shinjuku backstreet (Daido Moriyama), the biker in the sawn-off denims who studiously slicks back his hair (Danny Lyon), the male midget decked out in bra and panties scampering around a circus ring to the amusement of a crowd of ladies in their Sunday best (Bruce Davidson), and all the other interesting individuals are but the cast of colourful character actors from a single show reel for a film by David Lynch.  Or perhaps Federico Fellini is a better choice of auteur director since most of the work on show seems to hark back to the closing decades of the last century. 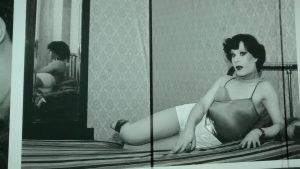 Of course, during the ensuing period, society has become much more enlightened and accepting of those previously considered transgressively beyond the pale or, if that’s perhaps too roseate a picture of the true course of the development of human understanding, it has at least become more familiar and so perhaps less shocked or surprised by those who choose to walk the paths less trodden.  And, I suppose, it’s even possible to make the case that this very sociological phenomenon is actually in large part due to the work of the photographers in this show and their hardworking colleagues who publicised these alternative lifestyles.  Whereas not so long ago examples of the kind of minority behaviour filling out this exhibition would be revealed, reviled and ridiculed in the yellow press pages of papers like the News of the World, whose editorial ethos seemed entirely designed to encourage outraged readers to splutter indignantly into their cornflakes, today I imagine all but the most shielded and sheltered of ten-year-olds would be at all shocked or surprised by the antics of any of the characters portrayed here.  Ironically, it also means that whereas once most of these images might have been startlingly, fascinatingly fresh, many of them are now almost boringly familiar and some – the flash of knickers from the jiving teddy girl; the line of easy rider bikers heading out on the open road; the sad little circus midget, with running make up, puffing on a consoling cigarette – even start to appear as stuff of somewhat tired old clichés. 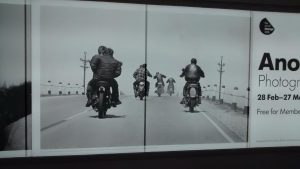 So, all in all, a bit of a curatorial mess and not exactly essential viewing but just about saved by the occasional flash of something diverting and so not totally without value. 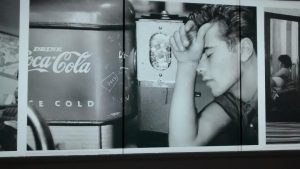 Finally, to end on a topical note (it being the week when the question of gender pay differentials has been in the news) I suppose I should draw attention to the fact that of the 20 photographers in the exhibition only 6 – or about 30% – are women.  Then again, it turns out that, rather counter-intuitively, of the Gallery staff – managerial, curatorial, promotional, developmental etc – credited with contributing to the production of the exhibition, very nearly 80% are women. 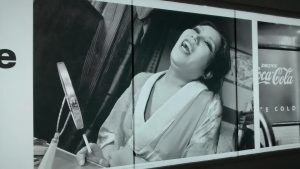