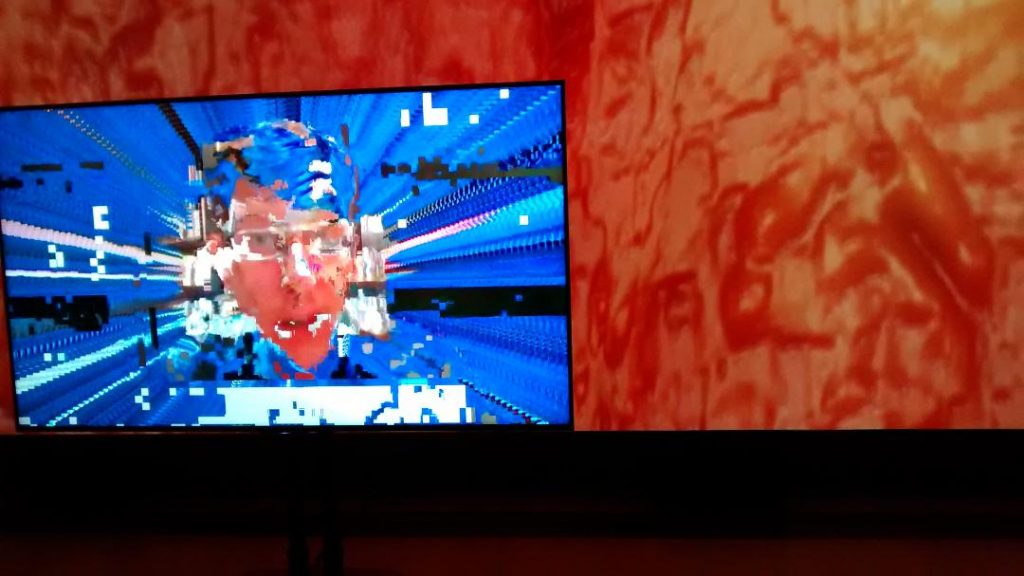 To South Kensington whereupon exiting the tube station I quickly realise that today must be some kind of school holiday as everywhere is crowded with a kerfuffle of rabbling kids and their over-excited parents all blocking up the pavements along the Exhibition Road.  Fortunately, once I’ve navigated my way past the great stone edifices of the Natural History and Science Museums, this bustling hubbub of happy humanity starts to diminish and, by the time I’ve nodded my respects in the direction of the distant glimmering golden memorial shrine to good Prince Albert, crossed over Kensington Road and entered into the purlieus of Kensington Gardens, there is but a tiny, intermittent trickle of art aficionados headed along the pathway that wends its way through the leafy arboreal glades and on towards the small oasistic outpost of cultural creativity that is the Serpentine Gallery.  Of course, these days there are, in fact, two Serpentinite Galleries and, if you enter the park from the north (having come via Lancaster Gate tube station), you’ll first come across the newer one with the flashy restaurant attachment signaling the credentials of its avant gardist presence by way of the great white blobby ectoplasmic extrusion that forms such a key part of the roofing structure.  I have to confess that the first time I came across this signature example of wildly expressive designeristic exuberance, I thought it was an ugly, intrusive and entirely inappropriate piece of architectural extravagance, though entirely in keeping with the loud, self-promotional personality of its author, the late Zaha Hadid.  With the passage of time, however, comes familiarity and such is the way that what was once the new and strange and disturbing can sometimes slowly sublimate its way into becoming the acceptable and reliable and comforting.   Unfortunately, this metamorphistical process doesn’t seem to have started happening here yet and using a bright shining bulbous globular lump as a connecting feature to join the new glassy extension to the old solid brick cuboid building that was transformed into the actual Gallery space still looks as awkward and uncomfortable as it ever did.  And I’m sure that those of a vulgar disposition find it all too easy to imagine that a Godzilla-sized pigeon has just deposited its calling card on the structure. 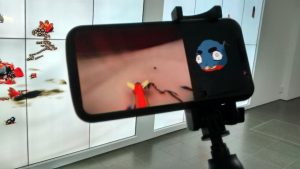 Anyway, leaving aside the merits or demerits of the buildings’ aesthetics, I suppose that the great potential advantage of having two Gallery spaces, connected by a small attractive walkway along the bridge that spans the Serpentine Lake, does mean that curators are provided with the opportunity to set up a reflecting resonance between the two competing exhibitions held therein.  But, rather curiously, this is not something that seems to have been very much attempted and so, instead, shows held at the two spaces tend to be separate one-person shows organised to be treated as a pair of entirely discrete entities.  As for the current exhibitions, well, there is a slight sense of commonality in that both the artists forgo the traditional methods of mark-making and reach into the technological toolbox of electronic wizardry to project their manipulated imagery directly onto the Gallery walls or else onto the shiny flat screen surfaces that are increasingly replacing the paper and canvas laminae that have helped civilisations depict, delineate and describe the worlds around them for so many previous centuries.  Although, having said that, the actual work of the two artist seems to mine very different sectors of sociological strata or areas of artistic activity or threads of theoretical thumthings. 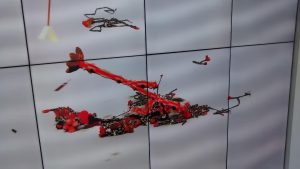 So, first off is Ian Cheng’s Bag of Beliefs which would actually have fitted equally well back down in the Science Museum since it’s an illustrated exploration of various rather neat sequences of computer coding conjury whereby simple tangerine-coloured cartoon entities are brought into two-dimensional life and left to interact with each other and also, to some extent, with their viewing public.  I suppose the experience is a sort of digital update on the equivalent analogue entertainment of going to the zoo and gawping at the animals held behind their bars and glass cages.   But instead of looking at various living and breathing critters, the make-believe menagerie of characters projected into Cheng’s wall-sized screens are mythical restless biomorphic hybrids that continually twist, turn and shape-shift their chimerical way through the full range of animal-vegetable-mineral formats.  So that what appears one minute to be some sort of crude, snaky reptilian gremlin is liable to metamorphose first into a bouquet of blooming plant petals, before once more rearranging its pixillated form to resemble a geometric stack of crystalline structures and then wriggling its electronic bits to start repeating the whole process all over again.  Watching all the steps unfold in this strange unceasing transformational dance of inanimate animation is initially utterly compelling although, after a relatively short while, the lack of any perceptible evolutionary development, let alone there being any meaningful kind of narrative structure beyond the fact of continual movement, makes the whole game – dare one say it – just a little bit boring. 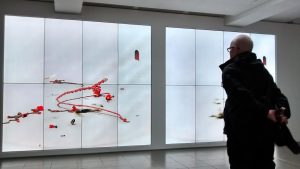 But is it art?  Well, since it currently resides in a Gallery then I suppose the answer has to be in the affirmative but, visually intriguing thought it may be for brief periods, I think ultimately, however smart and elegant are the designs of the algorithmic programmes that sparked it into life, it’s still really just a pretty novelty diversion that will require a good deal more theoretical consideration before it could possibly develop into anything more culturally significant.  Although, I can’t help thinking that maybe the art of the future might just emerge somewhere from within these artificially simulated worlds, in the cross-connections between the infinities of cyber space, the interconnectedness of interactive virtual realities and the story-telling possibilities and avatar personalities of computer gaming technology. 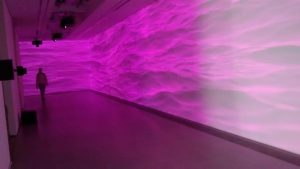 In the meantime, back in what passes for the real world, I trundle my transpontine trail over to the newer Serpentine Gallery where the American artist Sondra Perry also makes use of the magic of impressive modern technological gimmicry.  So it is that viewers are surrounded on all sides by the simultaneous streaming of a seamless single video movie onto all four of the Gallery walls.  Typhoon Coming On is a looping projection that strands its audience in the middle of what appear to be a Surreal seascape of incessantly pounding waves that switch colours between a mystical penumbral purple and a lighter more sludgey mixture of rusty yellows and bloody pinks.  This latter sequence is, in fact, a sampled selection of segments from a Turner painting that have been digitally animated into their current swirling patterns of movement.  Of course, it’s not just any of the master’s pictures that has been appropriately appropriated but a section of the sea from The Slave Ship which refers to a grimly obscene episode of British mercantile maritime history whereby a ship’s captain attempted some kind of insurance swindle that required him to offload his human cargo to their watery graves.  As the Gallery’s introductory information text explains, Perry’s works revolve specifically around, ‘…black American experiences and the way in which technology and identities are entangled…’ so, presumably, the artist is trying to make some connection with current day racism although, since the work is a new commission for this (her first European) show, maybe the intention is to make a more general point about the desperate plight of African immigrants attempting to cross the Mediterranean.  Either way, I’m not sure that the imagery, however spectacular, conveys either a very clear polemical message or engenders any very strong emotional reaction.  And, with an excruciating sense of irony, this rather mirrors contemporary reactions to the unveiling of Turner’s original work, at least as expounded by Ruskin when commenting on the picture in that most famous opus of British critical theorising:  Modern Painters.* For the great sycophantic wordsmith ladles praise upon his hero for the nobility of this particular painting, referring to the perfect drawing and fearless composition of the illumined foam of the restless sea, the desolate heave of the sepulchral waves, the awful but glorious light and so on and on and on.  No mention at all, however, is made of the slaves or their hands that reach out of the water in pitiful desperation. 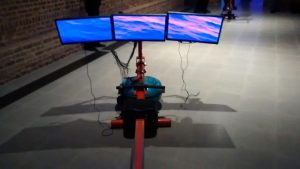 Elsewhere in the Gallery Perry reprises her vast moralistic muralistic video on a smaller scale version with the same colourful crashing waves this time appearing on three separate screens set at the end of one of those exercise rowing machines that you find in gyms (at least, that’s what I assume to be the case, not having ever actually visited one of these strange fitness parlours myself).  Apparently the equipment has been rigged so that a good deal of excessive effort is required to pull the pulleys and stretch the muscles or whatever it is that is expected of the would-be health fanatic-cum-art lover who is enticed onto the contraption in the hope of enjoying the full scope of the interactive experience.  Well, I’ve nothing against the civilising tenet of mens sana in corpore sano which is all very well on a theoretical level but not everybody wishes either to make themselves part of an exhibition or to make an exhibition of themselves by revealing the status of their bicipital musculature.  Consequently, I pass up the opportunity to do so. 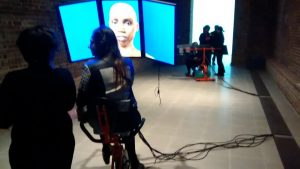 There’s also an exercise bike linked to another video setup here that I also avoid but I do take the time to have a quick look at the other filmic work – a collage of TV news broadcast clips that slowly disintegrate into a muddle of pixilated chaos.  Presumably this is meant as a sideswipe at the febrile and fallacious nature of much of today’s mass media, especially when it comes to attempting to report on what is considered as news.  An easy target and one that perhaps require slightly more finesse when attempting a constructive deconstruction.

So, a slightly odd pairing of shows but both worth a quick visit.

*Ruskin’s full commentary can be found on the following link