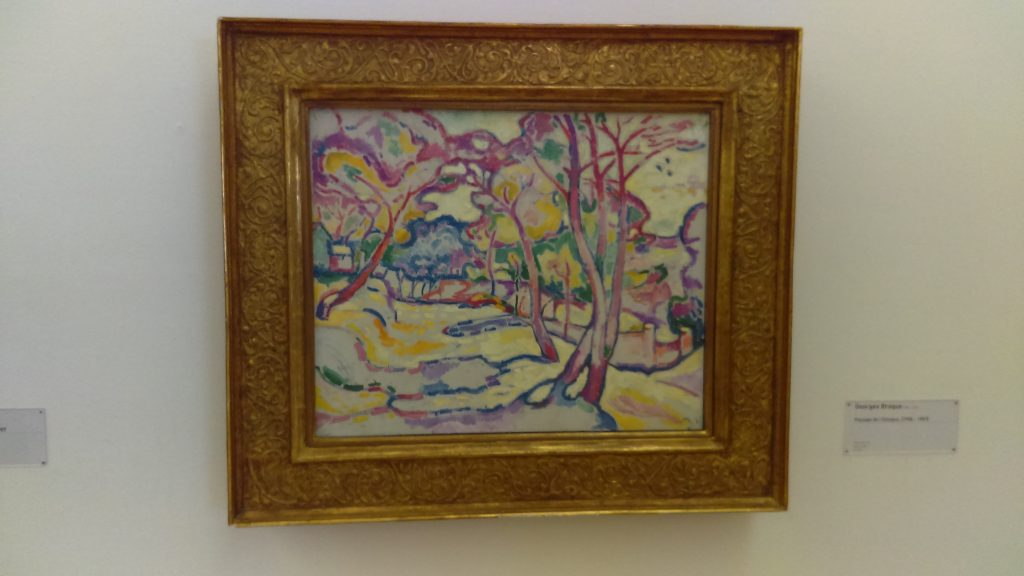 Eh bien, aujourd’hui je suis en Paris pour mes vacances d’Avril at which point, having stretched my foreign language skills to their limit to set the scene with some local colour, I think I’d better revert to the classic Anglo Saxon prose style with which regular readers will be familiar in order to relate what it was that I actually did and saw on my holidays in that elegant city across the sea and under the tunnel. 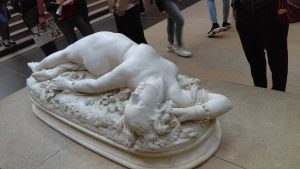 And so, first off a visit to the Musee d’Orsay (and apologies for my French accent – or rather lack of them – but I don’t know how to make them appear on my computer keyboard and so will leave it up to readers to make their own grave and acute corrections as we go along).  With its attractive, comprehensive and, frankly tremendous, collection of paintings and sculptures from French artists working during that crucial period around the turn of the century that led up to the First World War all placed within a good sensible layout, I think this is probably one of the most attractive galleries in the world.  It’s certainly one of my favourites and while the emphasis is not unnaturally focused on the works of the the Impressionists and Post Impressionists, that made France the cultural capital of the Modern world, a respectful nod is also given to some of the other less well known artists who were working in the more traditional Salon styles during the closing decades of the 19th century.  So, while we contemporary audiences may smirk at the extravagant writhing eroticism of Auguste Clesinger’s Woman Bitten by a Snake, or chuckle at Fernand Cormon’s vast, laboured scene of Cain’s family exiting Eden, that looks more like the forced eviction of some of Fred Flintstone’s neighbours, these items are also useful in showing just how different, radical and daring were the efforts of the early Modernists who ultimately swept all the other lot into the dustbin of art history. 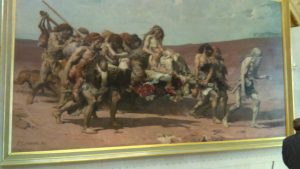 Aside from the obvious individual lighlights – Manet’s Dejeuner sur L’herbe; Millet’s Angelus and Gleaners, Van Gogh’s portraits of both himself and Dr Gachet, Rodin’s Gates of Hell – and then the walls full of first rate Bonnards, Monets, Gaugins and Cezannes; there are also swathes of other interesting, perhaps slightly less comfortably familiar works, that deserve more scrutiny – the Signac landscapes, the later Seurats and especially the Lautrec scenes at the cabaret that confirm just how skilfull he was at capturing the energy and excitement of those transient times. 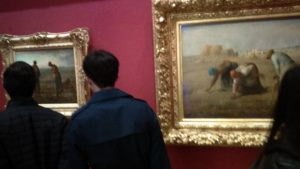 There’s a lot of great stuff to see here and sadly I just haven’t got space to do it justice so please accept my apologies as I head on to the next stop on today’s itinerary – a quick look in at the Paris Antiquarian Book Fair, being held just across the Seine within the stylish and expansive surrounds of the Grand Palais.  The elegant displays of rare and valuable books, not to mention the chic sartorial stylings of both vendors and visitors, provide a wonderful contrast to the charmingly scruffy and ramshackle ambience I seem to recall encountering at the last old book fair I went to at Chelsea Town Hall.  Fortunately, there’s nothing on display to tempt me since the only things that appeal are so far beyond my price range that they don’t require even the slightly consideration before passing them by. 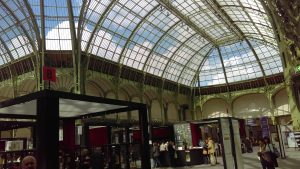 And so I make my last stop of the day, a shortish walk over to the Musee Gustave Moreau, not somewhere I’ve visited before and not an artist about whom I know very much, beyond a vague recollection that he was one of that band of sort of Gothic mystics known as the Symbolists.  And I think my memory is approximately right as this venue is certainly at the spookier end of the spectrum with dark rooms, creaky wooden floors, a vertiginous spiral staircase and three floors utterly full from floor to ceiling with the extraordinary painted scenes reflecting the magnificent expressive absurdity of the mind of a determinedly prolific artist.  Hercules Slaying the Hydra; The Death of Sappho; The Daughters of Thespis; an Allegory of Debauchery – Moreau paints all these scenes and a hundred more with the kind of dynamic fervor of the truly committed and while I’m not sure that the likes of Dali, Chagall or Delvaux would ever admit to his being a direct influence, I think he did perhaps exhibit what might be described as proto-Surrealistic resonances that pre-figured this trio, albeit that the later artist toned down some of the excessive effusiveness of their more manic forbear.  In short, this is definitely a place worthy of a visit and while Moreau can’t really claim to have been a truly great, first division artist, he undeniably had some kind of a crazed talent and certainly dedicated himself to his work with an impressive vigour and application. 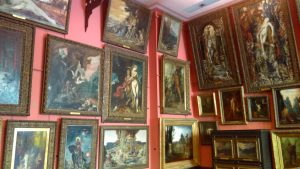 Well, if yesterday was Vendredi then today must be Samedi and so I’m back out promenading along the bustling boulevards of the capital city this time heading towards the Musee Picasso.  When I first visited the place a couple of decades ago I seem to remember that the layout was a straightforward chronological display showing how the eponymous Monsieur P had developed his range of styles over the decades and revealing each and every twist and turn of his illustrious career with a succession of exemplary illustrative masterpieces.  Sadly, following on from the Museum’s recentish renovation, the curatorial management has decided to shrink the permanent display to a minimum and instead give most of the small gallery spaces over to showing a succession of different thematic displays.  While these can undoubtedly be interesting and informative, it’s a pity not to have a proper consistent monument celebrating the breadth and mutability of Picasso’s prolific inventiveness which was perhaps his most notable characteristic and made him such a unique force of creativity and powerhouse of Modernist figurative design. 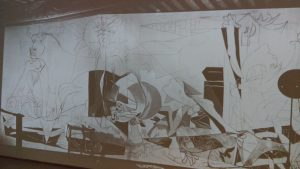 As it is, the current display centres around that most impressive and extraordinary of all 20th century artworks:  Guernica.  And while the original remains in Madrid (being far too precious to move) there’s a full-scale copy here as well as rooms full of preparatory sketches, related studies and a series of super-size projections of photographs of the painting taken during the course of its creation which usefully show the various stages of its overall development.  It’s all interesting stuff but since the painting marks such a dreadfully cruel and depressing episode in European history the mood in the galleries is unequivocally and monochromatically somber.  And when there are splashes of colour these are put to pointed effect to reinforce the sense of calamity and desperation as with the Weeping Woman (temporarily on loan from the Tate’s collection).  Padding out the show are a few works from other artists for whom Guernica has provided inspiration – a Richard Longo photo of the original with added bars, that symbolise I’m not quite sure what, and Art & Language’s splatter version in the style of Jackson Pollock that shares a similar arcane symbolism that is beyond my grasp.* 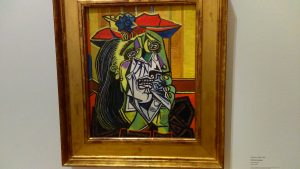 As mentioned, there is also an all too brief selected summary of well-chosen works outlining the master’s path through early Blue Period works and on through the various Cubist variations, with temporary intermittent interventions of Neo-Classical and Surrealistic sidesteps, before displays conclude with a small collection of the art that Picasso himself collected.  Considering his own iconoclastic reputation, it’s perhaps just a little surprising that Picasso’s own tastes were so comparatively bourgeois revealing a fondness for the simple flower paintings of Matisse and the comfortingly plump figure studies of Renoir.

Next on the tour is the Pompidou Centre which I’d expected to have been given a bit of a spring clean to mark the twentieth anniversary of its opening last year but sadly not and, frankly, it’s looking decidedly grubby with its space age, Post-Modernist architecture appearing terribly dated and quaint.  Fortunately the curators have reverted back to a chronological hang of the permanent collection which provides a very enjoyable art history stroll from Fauvism through Cubism, Constructivism, Surrealism and various other 20th century isms alongside individual rooms set aside for superstars like Matisse, Picasso, Kandinsky, Giacometti and so on. 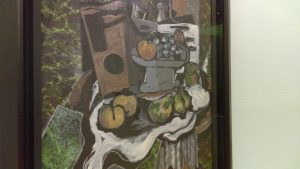 At least, that happy situation exists for the upper floor of the display which concludes around the mid-1960s.  Sadly, the lower floor which should have had a potentially equally exciting and interesting story to tell with Pop Art, Abstract Expressionism, Minimalism and so on interspersed with individualists like Johns, Bacon, Hirst etc looks decidedly flat and poorly displayed in a metaphorical equivalent of the famous Gallic shrug induced, presumably, by the fact that so few examples of important or influential art emanated from France during the second half of the last century. 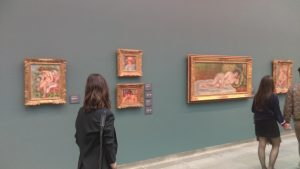 Oh well, let’s not linger on that particular tragedy and instead make one final visit to the golden age of French art courtesy of the displays in L’Orangerie.  So, firstly an enjoyable wallow in the sugary sentimental silliness of more of those Renoirs that Picasso liked before excellent little displays of works by Cezanne, Matisse, Rousseau, Soutine and Derain.  There’s also a temporary display that inserts an assortment of works of American Abstract Expressionism amongst some late, Giverny garden Monets but little connection is made and the Yanks come off looking embarrassingly weak in comparison.  Finally, there are the great Monet lily pond panoramas to savour – a display that definitely ranks as one of the seven wonders of the Modern Art world and a marvel that always rewards a fresh visitation. 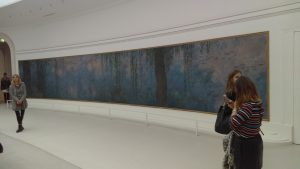 At which point it’s time to say a bientot with the promise of part deux de l’historire de mes vacances coming along with next week’s blog.

*The shot above from the Berman archives shows my own coloured-in version of Guernica which once occupied an underpass on the Tulse Hill Estate in SW2 (and appeared in the closing credits of the Sheila Hancock, Peter Capaldi film Love Child, albeit in a rather distressed state).